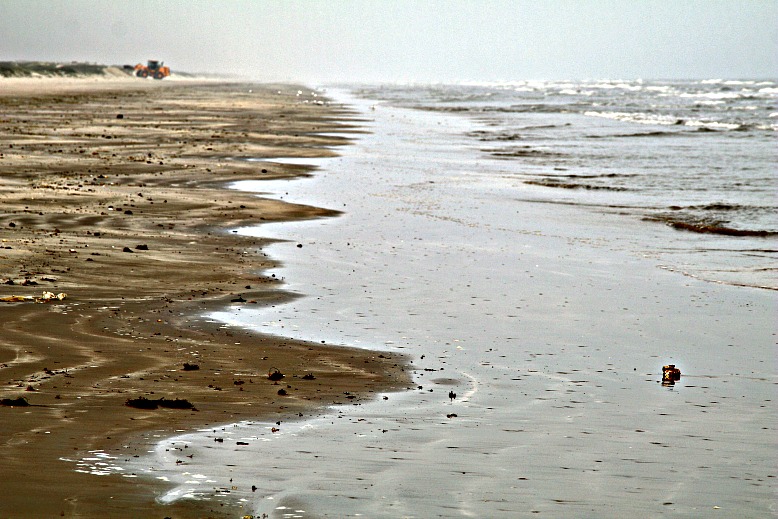 Are you ready for a day (or two or three) at the beach? Why not spend it at Padre Island National Seashore in Texas, a park with “the longest stretch of undeveloped barrier island in the world.”

Padre Island National Seashore separates the Gulf of Mexico from the Laguna Madre, one of a few hypersaline lagoons in the world. The park protects 70 miles of coastline. It is a safe nesting ground for the Kemp’s ridley sea turtle and a haven for over 380 bird species. It also has a rich history including the Spanish shipwrecks of 1554.

In addition to its 70 miles of protected coastline, other important ecosystems abound including rare coastal prairie, a complex and dynamic dune system, and tidal flats teeming with life. The National Seashore and surrounding waters provide important habitat for marine and terrestrial plants and animals including a number of rare, threatened, and endangered species.

Planning on putting the park address into a smart phone app or GPS? It most likely will NOT bring you to the park. For unknown reasons, many of those applications place the park’s physical address miles away from its actual location.

Fortunately, getting to the park is easy once you know that the road coming to the park—Park Road 22—actually dead ends into the National Seashore. The park entrance station is a booth that is located literally in the middle of the road. Once you’re on Park Road 22, just keep going until you reach the end and the park entrance station. Bring a paper map or use the above directions to locate the park.

Typical weather conditions. Weather on Padre Island varies widely and can change from sunny and warm to thunderstorms and heavy winds very quickly. Padre Island has long, hot summers and short, mild winters. Most rain falls near the beginning and end of hurricane and tropical storm season which lasts from June through October.

Average rainfall for the southern portion of the park is 26 inches and 29 inches for the northern area of the park.

Take a drive along the seashore. Many people come to the National Seashore to experience the beauty of nature in isolation. One way to do this is to travel down-island into the park’s most remote areas which are only accessible with a high-clearance, 4-wheel drive vehicle. Don’t try it with a regular car if you intend to drive further than 5 miles.

To get to the portion of the park where you can drive on the beach and down to the remote parts of the island, continue on the main park paved road (Park Road 22) past Malaquite Visitor Center until the pavement ends (South Beach). From that point, the park has 60 miles of beach open to driving. South Beach (and driving) ends at the Port Mansfield Channel, a man-made waterway cut through the island.

It is not possible to drive all the way down to South Padre Island due to this waterway. You must turn around at that point and drive 60 miles back north to reach the park paved road.

Remember that Texas beaches are public highways and all traffic laws apply including seat belt regulations. All vehicles on Padre Island National Seashore must be street legal and licensed.

Go camping. Padre Island National Seashore has two campgrounds and three areas for primitive camping. They are open year-round and are first-come, first-served. Campers must have a camping permit. There are no RV hook-ups on Padre Island but a dump station and a water filling station are available for all campers staying in the National Seashore.

Tucked in the dunes with a view of the Gulf of Mexico and a short distance north of the visitor center, Malaquite Campground features 48 semi-primitive designated sites. Located near the boat ramp on the waters of the Laguna Madre, Bird Island Basin Campground offers an opportunity for windsurfing, kayaking, boating, birding, and fishing. Both RV and tent camping sites are available but it is dry camping only.

If you’d rather stay in a full-service RV park, Corpus Christi, 10 miles away from the park entrance, has several choices. We stayed across the bay in Portland at Seabreeze RV Resort and would return in a heartbeat.

Since sunrises are spectacular along the seashore, plan to take a morning walk along the beach and bring your camera with you to capture the moment. During your early-morning walk, you might spot the elusive (and very fast) ghost crab peeking at you from its burrow.

Stick around after dark on a clear night for a little stargazing. Take a flashlight with you to spot ghost crabs as they move away from their burrows to seek a midnight snack.

Do some beachcombing. Have you ever gone to the beach with bucket in hand hoping to find treasures along the seashore? If so, then you have been beachcombing. Many of the currents that flow through the Gulf of Mexico bring endless curiosities onto the beach at Padre Island National Seashore. These items include seashells, beached jellyfish, sea beans (drift seeds), driftwood, lumber, plastics, and things that have been lost or discarded by seagoing vessels and other marine activities. The best time is immediately following a storm. You are allowed to keep a five-gallon bucket of treasures you might find but if an animal is still in its shell be sure to put it back where you found it.

Go fly a kite. Padre Island National Seashore has plenty of wind to fly a kite. The seashore has in the past hosted a kite festival in February filling the sky with all sorts of colorful kites including some intricate and creative Chinese kites. Be sure to check with the park before heading there with your kite.

Go swimming. Swimming at the National Seashore can be a lot of fun! You can swim in the recreation area at Bird Island Basin or in the Gulf of Mexico. However, remember that safety is important and there are no lifeguards on duty. Use caution when swimming and never swim alone.

Go fishing. Fishing has been one of the biggest attractions to Padre Island, long before its designation as a National Seashore. Visitors may fish along the entire length of the Gulf of Mexico beach in the Laguna Madre and at Yarborough Pass and Bird Island Basin. Two currents, one from the north and one from the south converge at Big Shell beach near the middle of the park.

These currents bring an abundance of nutrients which, in turn, attract plenty of fish. To fish anywhere within the park requires a valid Texas fishing license and a saltwater stamp which are only sold outside of the park at any local gas station or tackle shop.

Go boating. Bird Island Basin offers a boat ramp to provide access to the excellent boating and fishing waters of the Laguna Madre. It’s one of the world’s best windsurfing sites and you can fish and birdwatch there, too. You can get a daily pass to Bird Island Basin at the Entrance Station for $5.00 or an annual pass for $30.00. Be aware that jet skis, kite surfing, and air boats are prohibited at the national seashore.

Hatching releases. During the summer Kemp’s ridley sea turtle hatchlings are released from nests that were laid in the park and along parts of the Texas coast. Hatchling releases typically occur from mid-June through August. Most releases that are open to the public take place at 6:45 a.m. on Malaquite Beach in front of the Visitor Center at Padre Island National Seashore. For information about public hatching releases, call the Hatchling Hotline at 361-949-7163. Because park rangers cannot predict exactly when a sea turtle nest will hatch, not all hatchling releases are public and hatchling releases do not occur daily or on a regular schedule.

Go bird watching. With more bird species that any other city in the U.S., Corpus Christi has won the competition for being the “Birdiest City in America” for the past 10 years in a row. Needless to say, Padre Island National Seashore, located on 130,000 acres of undeveloped land is an exceptional place for bird watching.

Situated along the Central Flyway, Padre Island is a globally important area for over 380 migratory, overwintering, and resident bird species (nearly half of all bird species documented in North America). You’ll catch sight of brown pelicans, egrets, herons, terns, gulls, hawks, ducks, teals, and crested caracaras and not just along the beach but inland as well. The best time to bird Padre Island National Seashore is either during early spring or during fall and winter when thousands of birds either migrate through the park or spend the winter there.

Interpretive programs. Attend a ranger program to learn about the seashore, the birds, and the things that wash up on the beach. Informal 30-45 minute Deck Talks on various aspects of the island’s natural and cultural history are held Thursdays to Sundays at 1 pm at the Malaquite Visitor Center.

Relax on the beach, build a sand castle, and play in the sand. Just remember the Leave No Trace principles. If you dig any holes or trenches while playing in the sand, cover them back up so they don’t create a hazard for vehicles, people, and animals.

Remember to check the park’s website for any alerts and closures due to construction or weather-related damage. Check the site also for other things to know before you head out to the park and whether or not pets are allowed.

Read Next: Where the Journey Is the Destination: Texas State Highway 35

I must go down to the seas again,

To the lonely sea and the sky,

And all I ask is a tall ship and a star

To steer her by.