What is it about the road trip that lends itself so well to cinema? 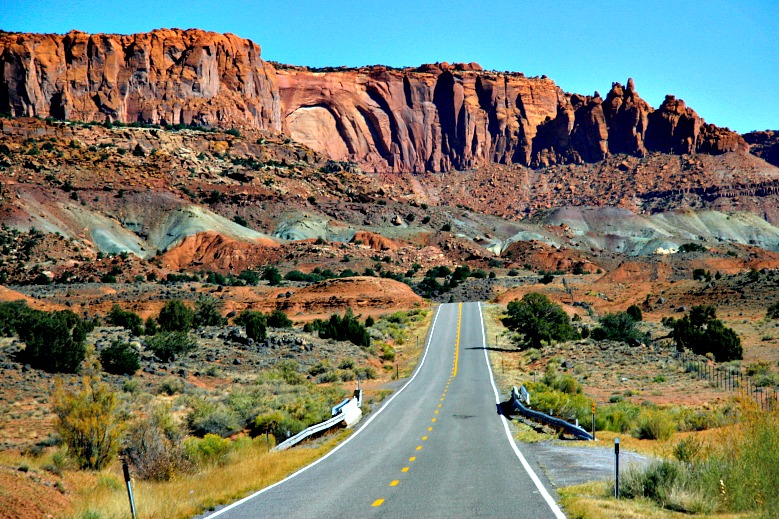 The sun is shining, the weather is sweet, and the asphalt is calling: road trip season is here.

It’s a mood captured countless times on the big screen over the years with road trips used as a powerful device for narrative progression. Families confined within a space for hours on end, surprise encounters, and the inherent jeopardy of traveling at speed in a metal box have all played a role in some of the most memorable movies of all time.

There is something uniquely American about the idea of hitting the open road and driving endlessly through changing landscapes, either toward the promise of something better or as an escape from real or imagined oppression. While running the gamut from liberating to terrifying, American road trip films share a common thread: through the act of driving there is the opportunity for discovery. Characters often find something new about themselves, others, or some greater principle or purpose.

I researched the history of road trip cinema and chose 10 of the most iconic films in which people drive across the U.S.

Some road films reveal that running away is futile or even cowardly while others crystalize the fact that we cannot outrun the consequences of our actions even if we drive forever. At the same time, the genre reminds us that there is great potential in removing ourselves from the monotony or comfort of everyday life—that the act of leaving can be a powerful assertion of agency.

The history and diversity of American road trip films span decades and generations and encompass countless genres. From the lawlessness and violence of “Natural Born Killers” to the horror of “The Texas Chainsaw Massacre,” and even the bittersweet optimism of “Little Miss Sunshine,” road trip films reflect the politics and sense of national identity of their time and place.

Easy Rider stars Peter Fonda and Dennis Hopper as bikers who smuggle drugs from Mexico into California, sell them and head eastward to New Orleans trying to make it in time for Mardi Gras. They stash their money near the gas tank of the “Captain America”—a custom-made motorcycle with a signature long front end—ridden by Fonda’s character. Along the way, they stop at a commune in Arizona and find trouble in New Mexico where they encounter a drunken lawyer played by Jack Nicholson who they convince to join them.

Produced on a mere $360,000 budget, Easy Rider is remembered as a film that captures the feeling of late-’60s counterculture complete with hallucinogenic trips, a free-love commune, and a soundtrack studded with The Band, The Byrds, and Jimi Hendrix. Its legacy is also one of subverting the mainstream Hollywood studio system. Its unprecedented commercial success—grossing $60 million globally on a small budget—as well as its indie status, stunned Hollywood executives.

Did you know? Only one bike from Easy Rider—the “Captain America”—is known to have survived. The other choppers were stolen before filming ended and haven’t been seen since.

The Texas Chain Saw Massacre changed the horror film genre and American filmmaking more generally in profound ways. Aside from inspiring nine films in the franchise, it pioneered the slasher genre while showing surprisingly little blood and gore, relying instead on clever camera work and misdirection to suggest horrific images. Filmmakers including Ridley Scott, Wes Craven, and Guillermo del Toro count the film amongst their favorites. “The Texas Chain Saw Massacre” takes aspects of the traditional road trip film beginning with the group of idealistic young people piled into a car and quickly turning the viewer’s expectations into a nightmare.

The film follows a group of friends who take a road trip through rural Texas to visit a family member’s gravesite but are forced to stop when their car runs out of gas. Early signs of danger include a violent encounter with a hitchhiker and when they stop at a quiet gas station only to find out the pumps are empty. Terror builds when they come across Leatherface, the now-legendary chainsaw-wielding villain who wears a mask made of human skin.

Did you know? The film is an allegory for the Vietnam War.

Road comedy National Lampoon’s Vacation follows the Griswold family led by patriarch Clark (Chevy Chase) as they embark on a road trip from Chicago to a southern California amusement park. The trip, a bid to spend more time together as a family and enjoy a picturesque vacation quickly goes awry. Driving a large, ugly station wagon, the family experiences countless misadventures along the way.

The station wagon used in the film, known as the Wagon Queen Family Truckster was specifically designed as a parody of 1970s station wagons complete with faux-wood paneling and a “metallic pea”-colored paint job. Five identical cars were produced for the film due to the extent of the mishaps experienced by the family.

Did you know? The film’s fictional Family Truckster was designed by the American custom car builder George Harris who’s perhaps best known for making the Batmobile used in the Batman live-action TV series.

After emerging from the Texas desert unable to speak or explain where he came from, Travis (Harry Dean Stanton) is rescued by a German doctor. The doctor contacts Travis’ estranged brother (Dean Stockwell) who then drives from L.A. to pick him up. When they return to California, Travis meets his young son who has been adopted by his brother and they decide to embark on a journey to find his son’s mother.

Traveling from southern California to Houston in a classic blue and white ’58 Ford Ranchero, the two reconcile. Passing through desert landscapes, past old road motels and neon signs, the aesthetics of “Paris, Texas” are part-Western, part Edward Hopper Americana.

Did you know? The moving character study was written by Pulitzer Prize-winning playwright Sam Shepard,

Rain Man tells the story of Charlie (Tom Cruise), a young hustler who discovers he has a brother, Raymond (Dustin Hoffman) after his father dies and leaves Raymond his lucrative estate. Charlie travels to Ohio and finds that Raymond is an autistic savant who has been institutionalized. In an attempt to gain control of the money from their father’s estate, Charlie kidnaps Raymond from the institution. The two embark on a road trip from Cincinnati to Los Angeles where Charlie plans to fight for custody of his brother in their father’s 1949 Buick Roadmaster convertible.

The film’s enduring legacy is complicated: While it was groundbreaking for its representation of a character with autism some have called its portrayal of autism spectrum disorder reductive or stereotypical.

Did you know? The owner of the Buick Roadmaster used in Rain Man is the film’s director, Barry Levinson.

Thelma & Louise stars Susan Sarandon and Geena Davis as two best friends who depart their unsatisfying home lives in Arkansas for a weekend away only to become fugitives on the run from the law. The two head in the direction of Mexico in Louise’s 1966 blue Ford Thunderbird convertible hoping to cross the border and evade capture by the FBI. Louise insists they avoid driving through Texas so they take a meandering route west traveling through New Mexico and the Grand Canyon.

Thelma & Louise remains a landmark film in the feminist cinema for its politics, exploration of gendered violence, centering on a best-friend relationship, and for subverting several genres: the Western, the road film, the buddy film, and the crime drama. Davis and Sarandon both received Best Actress Oscar nominations for their co-starring roles.

Did you know? Thelma and Louise isn’t the only famous film to feature a fourth-generation Ford Thunderbird convertible: a yellow example also appeared in the 1964 James Bond movie Goldfinger.

Starring Woody Harrelson and Juliette Lewis as a murderous married couple, Natural Born Killers grapples with the way mass violence and its perpetrators are given celebrity status by the media.

The film follows the couple as they go on a multi-state killing spree traveling from New Mexico to Arizona and Nevada, all the while attracting media attention that turns them into macabre cult heroes. Featuring a red 1970 Dodge Challenger convertible, the film subverts the often family-friendly conventions of the road trip movie while incorporating images of Western landscapes to remind viewers it is a particularly American story. The film sparked controversy over its gratuitous violence and director Oliver Stone was sued when the film allegedly inspired copycat crimes (the suit was later dismissed).

Did you know? According to Tom Sizemore, he got the part of Detective Jack Scagnetti after writing a monologue for the character which he made Oliver Stone listen to in the parking lot of a bar.

Based on a true story, The Straight Story follows Alvin (Richard Farnsworth), an elderly Iowa man who decides to visit his estranged brother after he has a stroke. Unable to drive, Alvin hitches a trailer to his lawnmower and embarks on a journey to Wisconsin. Only able to travel at five miles per hour, the journey takes several weeks and involves a series of mishaps and connections made with other long-term travelers and passersby.

The Straight Story was filmed along the actual route that the real Alvin Straight took on his original journey. Farnsworth who died by suicide one year after the film’s release had been suffering from cancer that left his legs partially paralyzed during the filming of The Straight Story. He received a Best Actor Oscar nomination for the role.

Did you know? As crazy as it sounds, The Straight Story is based on a true story. In 1996, the real-life Alvin Straight really did drive his ride-on mower for 240-mile trip to visit his unwell brother.

Sideways stars Paul Giamatti as Miles, an unsuccessful writer who brings his friend Jack (Thomas Haden Church) on a road trip to California wine country as a final adventure before Jack gets married. Traveling up the coast of California in a bright red ’87 Saab Turbo convertible, the two men experience a range of mishaps leading up to Jack’s wedding ceremony.

The film which centers largely around Miles’ obsession with wine (particularly pinot noir) has been credited with influencing the California wine industry. As of 2017, production of California pinot noir wine had increased by 170 percent since the film’s release—a trend that winemakers labeled “the Sideways Effect.”

Did you know? The reason for the film’s title is never explained in the film itself but it is made quite clear in the novel on which the film is based as the two main characters use the term “sideways” to mean “intoxicated.”

Based in New Mexico, her large family—including her parents, grandfather, uncle, and half-brother—travels 800 miles in a yellow VW bus to reach southern California for the competition that is just two days away. Along the way, issues with the bus as well as personal trials and misadventures, bring the family together in unexpected ways. Breslin earned an Oscar nomination for Best Supporting Actress at just age 10.

Did you know? Little Miss Sunshine’s screenplay writer Michael Arndt based the issues affecting the Volkswagen on the unreliability of a camper van from a real-life childhood road trip of his own.