Trek back through time 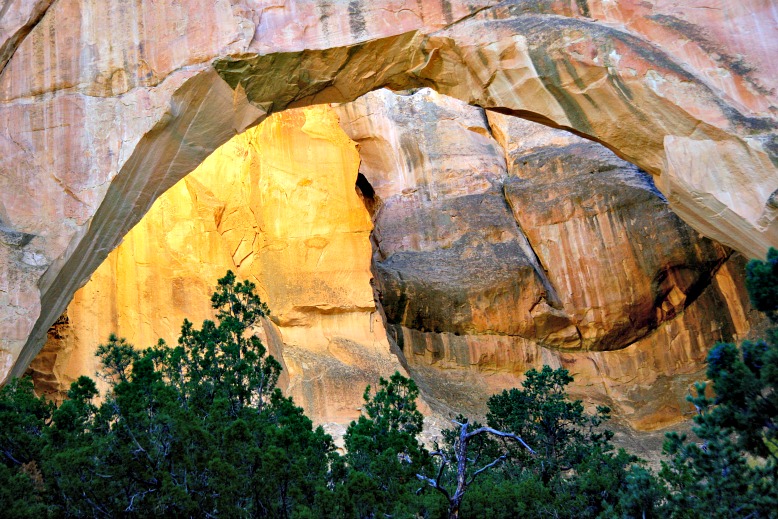 Hiking El Malpais and El Morro national monuments prompt a different view of the past.

If people had been there to see it—and there’s a chance Ancestral Acoma or Zuni people were—lava flowing across what’s now El Malpais National Monument might have looked a little like a dark ocean swelling with waves.

When an eruption began, magma poured and oozed from an erupting vent or fissures in the earth spreading across the ground into channels. Everything in its path would be knocked over, surrounded, buried, or ignited by the extremely hot temperature of lava. As the liquid fire continued to flow, it sometimes moved underneath and lifted a blackened crust.

As it reached the rim of sandstone mesas around the southeastern edge of El Malpais, lava rolled away from the rock walls, slipped into cracks, or filled in corners. Here, some of the continent’s newest rock now abuts the sandy floor of the ancient inland sea.

Behind the park’s western visitor center, lava ran over Precambrian granite. So it’s 1.5-billion-year-old rock and on top of it is a 10,000-year-old rock.

Managed by the National Park Service (NPS), El Malpais has the unusual distinction of having a twin park in El Morro National Monument to its west along State Route 53. Together they offer an action-packed adventure.

I contemplated the geological forces as we drove west on State Route 53 crossing a landscape that has reshaped itself over thousands of years. Every time I stepped out of my car, I shifted back in time by thousands of years. At the eastern edge of the park, the newest flows are about 3,000 years old, give or take a millennium—just a blink of an eye in geologic time. Elsewhere, the lava was last liquid 150,000 to 170,000 years ago.

Surviving in this region has long meant journeying around, not the shortest path to your destination but the one that passed by water sources which are how Spaniards began visiting what’s now El Morro National Monument. A drive of fewer than 30 minutes takes you from one park to the next. But for anyone on horseback, it would have taken at least a day. Back then, the road we now call State Route 53 which threads between heaps of lava rock and sandstone would have been a major trade route.

For thousands of years, people have found their way to a small pond fed by a reliable spring below a towering cliff. There, they rested, watered their horses, and camped under a diamond-specked sky. Quite a few labored to chisel their names into the sandstone wall.

Travelers knew to head to El Morro’s massive, cream-colored sandstone buttress for the pool of water at its base, the only reliable source in a region with no perpetual streams or rivers.

Rain and snowmelt still gather there, in a deep-green pool ringed by cattails that rattle in the breeze. Spaniards stopped here on their way to preach to the Zuni and Hopi or to colonize the region. Later, government survey teams and homesteaders spreading into the new U.S. territories in the Southwest did, too. They used knife blades or horseshoe nails to sign their names and record their destinations and purposes, even a poem, on the soft surface of the 200-foot-tall monolith of Inscription Rock. Those markings layer alongside much older petroglyphs and pictographs.

A short, steep hike leads to the mesa-top home of an Ancestral Zuni village perched on sandstone. The trail loops past a few rooms and kivas after dipping and twisting over sandstone bleached as white as the clouds above.

Today that wall at El Morro National Monument serves as a guest book of history. Spanish conquistador Juan de Oñate “passed by here” in 1598; hundreds of others did so as well, before and after. Inscription Rock is just one reason to put El Morro on your must-see list.

A superintendent in the 1920s scrubbed out signatures added after 1906 when El Morro became a national monument assessing them as illegal graffiti and leaving bald patches on the surface. No record remains of who made the arduous drive to see the area’s second national monument or who visited around 1918, during a major war and another pandemic. Now, as water works through and over the sandstone, the etchings’ lines soften, lichen obscures some, and rockfall has taken down others. It’s hard to hold history in place.

Admission is free—to the visitor center, the half-mile paved Inscription Trail, and even the campground. If you’re up for a little challenge tack on another mile or so and clamber up the Headland Trail. On the mesa top, you can explore the ruins of Atsinna Pueblo and snag some snaps of the nearby Zuni Mountains and remnants of ancient volcanoes.

But in these faded bluffs, in the creases of lava flows, I start to see landscape-scale reminders that history is also happening now. We don’t live at the end of the timeline, a terminus point from which history is a fixed and distant object we look back on. Rather, it’s something that is in constant flux, written moment by moment.

Visitor centers for El Malpais (off I-40 at exit 85) and El Morro (between mile markers 44 and 45 on State Route 53) provide restrooms, maps, and rangers’ advice.

Travel on an ancient pathway by hiking the eight-mile Acoma-Zuni or Zuni-Acoma Trail (depending on your direction of travel). Trailheads are on SR-117 and SR-53 so set up a car shuttle.

A three-mile loop hike at El Calderon off SR-53 skirts cave entrances and climbs a cinder cone. Wildflowers may be abundant.

At El Morro, a trail passes along the base of Inscription Rock then switchbacks 200 feet up the mesa passing through an ancient pueblo before looping back to the visitor center in just over two miles.

Camp at El Morro is one of nine sites spread among the junipers, each with a fire pit, a picnic table, and a view of stars thick overhead in this official International Dark Sky Park. Open on a first-come, first-served basis with water available seasonally.

Read Next: The Ultimate Guide to Aztec Ruins National Monument