Celebrate the natural, industrial, and historic wonders of the US by visiting these iconic sites 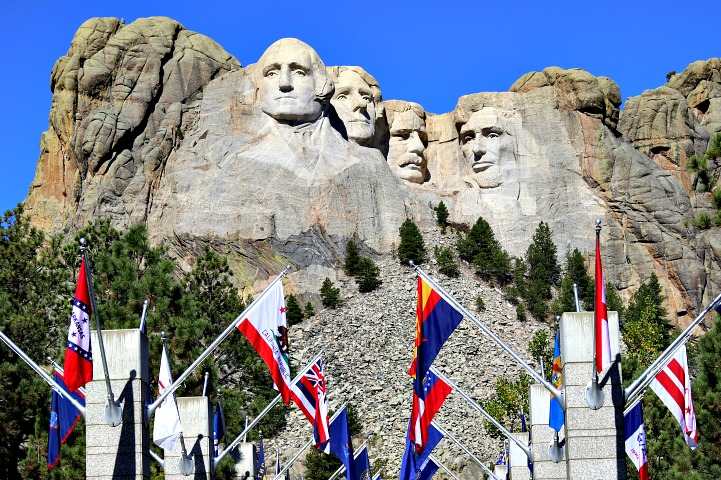 So many great places—so little time.

Skyrocketing gas prices have consumers looking twice at their fuel budget, yet Americans are determined to hit the road. Experts say that fuel costs may actually boost domestic tourism and the 4th of July holiday travel plans.

Car and RV travel “will set a new record despite historically high gas prices with 42 million people hitting the road” this week for Independence Day vacations, according to AAA.

The Deloitte summer travel survey reports that 84 percent of American travelers will take an overnight trip, 57 percent will enjoy a road trip and just 15 percent will travel internationally partially due to uncertainty over ongoing COVID-19 restrictions.

Given all of this, here’s a look at 12 fabulous spots across the country with each location in a different state. Taken together, these selections reveal America’s heroic history, industrial achievement, and natural beauty that, woven together, tell the story of America.

One of the Seven Natural Wonders of the World alongside the likes of the Great Barrier Reef and Mount Everest, the spectacular gorge stands alone as perhaps the most iconic symbol of the stunning beauty of the American continent. The Grand Canyon encompasses a 277-mile stretch of the Colorado River, about the distance from Boston to Philadelphia. It is up to 18 miles wide and more than 1 mile deep, standing as the world’s greatest example of the erosive power of water.

The colonial south lives today amid the verdant squares of Savannah, a nearly 300-year-old city that enjoyed a rebirth following its haunting, captivating portrayal in the 1994 bestselling book Midnight in the Garden of Good and Evil.

Visitors love Savannah for its charming thoroughfares including the iconic cobblestones of River Street, delicious restaurants highlighting the best of southern fare such as Paula Deen’s flagship eatery The Lady and Sons, its historic squares such as Chippewa Square featured in Forrest Gump, and one of the nation’s biggest and best St. Patrick’s Day bashes.

The centerpiece of the Presidential Range of the White Mountains is nothing less than the tallest peak in the northeast (6,288 feet). More famously, Mount Washington habitually witnesses the globe’s most severe weather—due to its elevation and its location at the convergence of several major storm patterns.

Mount Washington’s brutal wind and cold are proclaimed locally as a testament to the hearty nature of Live Free or Die state residents. The summit held the record for the highest wind speed ever recorded (231 mph) for several decades and reached a record low temperate of -50 degrees Fahrenheit in January 1885. The Mount Washington Observatory recorded a wind chill of -103 degrees as recently as 2004. The mountain today is a popular attraction for visitors who ascend the top via hiking trail, precarious auto road, or popular cog railway.

This geological oddity is an American wonder for its natural beauty and sobering role in the history of modern warfare. White Sands National Park includes 275 square miles of glistening gypsum sand—the largest dune field of its kind on Earth surrounded by the U.S. Army’s White Sands Missile Range.

It was on this site in July 1945 that American scientists, led by J. Robert Oppenheimer, first unleashed the power of the atomic bomb, a victory of American ingenuity and industrial power amid World War II. The achievement also had lingering ramifications for mankind. The Trinity test at White Sands was a prelude to the atomic attacks the following month on Hiroshima and Nagasaki in Japan that ended World War II. The park today offers spectacular vistas and touring by automobile, hiking, biking, or pack animals.

The rugged and wild parkland is celebrated for its aptly named badlands, free-roaming bison, and its namesake’s Elkhorn Ranch on the Little Missouri River.

The park recently had one of its busiest years ever attracting 800,000 visitors in 2021. Stargazing is a popular activity in the isolated park hundreds of miles from the nearest major city with weekly events and viewing parties highlighted by the annual Dakota Nights Astronomy Festival. Typically held on Labor Day weekend, date of the 2022 event is still pending.

The stunning human cost of preserving the nation is best seen in this sprawling battlefield in rural south-central Pennsylvania. Gettysburg pitted about 160,000 men in a pitched three-day battle that turned the tide of the Civil War in favor of the Union. Some 50,000 soldiers from both sides were killed or wounded. It remains the largest battle in North American history.

Visitors today can stand where Joshua Lawrence Chamberlain ordered the 20th Maine to fix bayonets and charge down Little Round Top to save the southern end of the Union line, walk in the footsteps of brave Confederates slaughtered during Pickett’s charge on the decisive day of battle, or tour the vast battlefield by car exploring the hundreds of haunting monuments that dot the landscape today.

The wealth of the Gilded Age springs to life in Newport where the nation’s titans of 19th-century industry built ostentatious summer homes on the cliffs where scenic Narragansett Bay meets the Atlantic Ocean.

The Breakers, owned by railroad tycoon Cornelius Vanderbilt II, is probably the most spectacular built of limestone in the ornate style of an Italian palazzo. Newport’s legacy as a playground of the wealthy lives on today around its charming and busy New England downtown waterfront. The city is home to the International Tennis Hall of Fame and hosted America’s Cup, the world’s premier sailing race, for decades.

The antebellum South, both its beauty and the disturbing legacy of human bondage, live on today, and its vast collection of some 2,000 plantations many of which are centered around historic Charleston and open to visitors.

Magnolia Plantation & Gardens features what it calls “America’s last large-scale Romantic-style garden” while offering 45-minute tours of its slave cabins. Middleton Place, named for Declaration of Independence signatory Arthur Middleton, claims “America’s oldest landscaped garden” across 65 acres. Boone Hall dates back to 1681 and is famed for its Avenue of the Oaks with its moss-covered limbs forming a photogenic canopy along with an array of brick homes that housed slave families.

This monumental sculpture of four U.S. presidents, each of their faces 60 feet tall, turned a remote area of a remote state into a beloved symbol of the national narrative. Law school student William Andrew Burkett summed up the purpose of the monument in 1934 in a winning essay he submitted to a contest hosted by Mount Rushmore sculptor Gutzon Borglum.

“Almighty God, from this pulpit of stone the American people render thanksgiving and praise for the new era of civilization brought forth upon this continent,” Burkett wrote, his essay immortalized in bronze at the park. Mount Rushmore attracts some 2 million visitors a year and is a prominent place in the nation’s cultural lexicon with its images of George Washington, Thomas Jefferson, Theodore Roosevelt, and Abraham Lincoln staring stoically across the American continent.

The spectacular images of eroded sandstone buttes rising from the red rock of the Colorado Plateau, hard by the Arizona border, are firmly ingrained in America’s natural and cultural landscapes. Monument Valley was forged by tectonic forces some 250 million years ago. It was inhabited by Navajo for centuries who set aside the land as a park within the Navajo Nation in 1958.

Its stunning landscape has reached audiences around the world as the backdrop of classic western movies such as Stagecoach, the 1939 John Ford flick that made John Wayne a star. More recently, its jagged cathedrals of stone framed war hero and shrimp tycoon Forrest Gump as he abruptly ended his famous silver-screen jog across America on U.S. Route 163 near Mexican Hat, Utah.

The “Sixth Great Lake” sits on the border of New York and is best explored from the quintessential New England college town of Burlington. It has loomed large in both Native and European American history. Lake Champlain divided the Mohawks to the west and Abenaki to the east while British and continental forces fought for control of the 107-mile-long lake throughout the American Revolution.

Lake Champlain today is a perfect location to enjoy the pristine wilderness and especially the autumn foliage of northern New England, or search for Champy. The mysterious Loch Ness monster-like creature was first known to the Abenaki, allegedly witnessed by French explorer Samuel de Champlain himself, and reported by dozens of other witnesses in the centuries since.

America’s newest national park has long been a symbol of an Appalachian Mountain state so beautiful it’s known around the world as “almost heaven.” New River Gorge achieved its federal designation in December 2020. The park is celebrated most notably for its spectacular New River Gorge Bridge. It was both the world’s highest auto bridge and longest single-span arch bridge when it opened in 1977 though it has been surpassed in both global superlatives since.

The park offers many recreational opportunities, along with insight and exhibits exploring West Virginia’s coal mining history and culture.

Everything that is really great and inspiring is created by the individual who can labor in freedom.