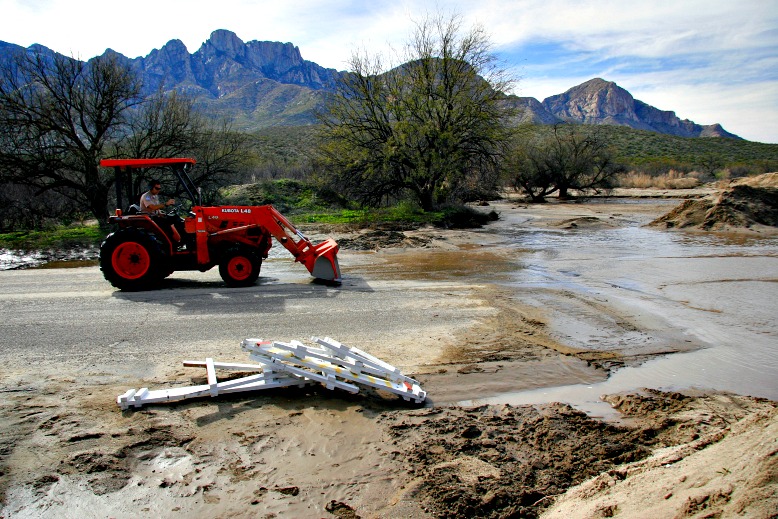 Historic rainfall around St. Louis, Missouri on Tuesday (July 26, 2022) led to flash flooding that submerged cars in a river of water on Interstate 70 and trapped people inside their homes. Flash flooding led to numerous road closures across the St. Louis metropolitan area after a record-setting 6 to 10 inches of rainfall caused widespread flash flooding, the National Weather Service’s (NWS) office in St. Louis reported. St. Louis recorded 8.06 inches of rainfall in five hours since midnight shattering the city’s old daily rainfall record of 6.85 inches logged in August 1915, the NWS said.

Devastating flash floods throughout eastern Kentucky have left eight residents dead, dozens of homes submerged in water, and others completely swept away from their foundations. Multiple counties across Appalachia Kentucky have endured torrential rains since early Thursday morning (July 28, 2022) as floodwaters began rushing down the hillsides and completely swallowing up portions of the Kentucky River sending residents searching for high ground until rescue teams could save them.

Airports, parking lots, and the entire Las Vegas Strip which houses some of the world’s most famous casinos and hotels were also flooded Thursday. Heavy rain filled countless buildings as the city put a flash flood and severe thunderstorm warning in place.

People often have a hard time envisioning the power of moving water. Each year when heavy rains pummel North America’s deserts or mountains, another camper endures a flash flood camping weather disaster. Those who live to tell about it are shocked to learn how these torrential storms can destroy everything in its path—including RVs.

The severity and speed of flash floods make them one of the most harrowing weather events adventurers might encounter. They occur when excessive water fills normally a dry canyon or wash and when creeks and rivers rise rapidly from rainfall within their watershed.

According to the National Severe Storms Laboratory, a creek that’s only six inches deep in the mountains can swell to a ten-foot-deep raging river in less than an hour if a thunderstorm lingers over an area for an extended period of time.

According to the National Weather Service (NWS), flash flooding can happen nationwide. It is also the number one weather-related killer in the U.S. On average, 86 people die each year because they attempted to drive through floodwaters—and unfortunately, that number is increasing.

It takes as little as six inches of water for a vehicle to be swept away.

According to the U.S. Geological Survey, water one foot deep typically exerts 500 pounds of lateral force on a vehicle. Once your vehicle is floating, the floodwater becomes your steering wheel. If that water is moving, your vehicle could be swept away, tipped on its side or flipped.

Rising water can enter your vehicle in a manner of minutes, even seconds.

The best advice is never to drive through flood waters of unknown depth. As the NWS has campaigned for years: TURN AROUND DON’T DROWN!

NEVER try to walk, swim, or drive through such swift water. If you come upon flood waters, STOP! TURN AROUND AND GO ANOTHER WAY.

Some people risk destroying their vehicles and potentially losing their lives by driving through floodwaters. It’s a scary experience to come across rising water on the road during a rainstorm, not knowing if you’ll stall out. It is not worth the risk!

What is Flash Flooding?

Flash Flooding occurs so quickly that people are caught off-guard. Their situation may become dangerous if they encounter high, fast-moving water while traveling.

How do Flash Floods occur?

Several factors contribute to flash flooding. The two key elements are rainfall intensity and duration. Intensity is the rate of rainfall and duration is how long the rain lasts. Topography, soil conditions, and ground cover also play an important role.

Occasionally, floating debris or ice can accumulate at a natural or man-made obstruction and restrict the flow of water. Water held back by the ice jam or debris dam can cause flooding upstream. Subsequent flash flooding can occur downstream if the obstruction should suddenly release.

Flash floods occur within a few minutes or hours of excessive rainfall, a dam or levee failure, or a sudden release of water held by an ice jam. Flash floods can roll boulders, tear out trees, destroy buildings and bridges, and scour out new channels. Rapidly rising water can reach heights of 30 feet or more. Furthermore, flash flood-producing rains can also trigger catastrophic mud slides. You will not always have a warning that these deadly, sudden floods are coming. Flash flooding occurs within six hours of the rain event. Flooding is a longer term event and may last a week or more.

Where do Flash Floods occur?

Flash Flooding is possible anywhere and everywhere. The normally tranquil streams and creeks in your area can become raging torrents if heavy rain falls overhead or even upstream of your location. Flash Flooding can also occur on city streets and highway underpasses.

Key points to keep in mind include:

Plan ahead: Identify where to go if told to evacuate.

Flash floods are especially common in the desert. But according to Scientific American, flash floods can happen in both urban and remote settings. Pretty mountain areas are especially vulnerable if the snow melts quickly after a rain storm. Other susceptible areas to worry about are recently burned hillsides.

Weather experts also say that fast-moving water can take out everything in its path—even the largest RVs. The risk is there but don’t let it keep you at home. If you know how to avoid a flash flood camping weather disaster in the first place, you can stay safe. The campsite you choose to park in is the best place to begin.

Many RVers love the adventure of wilderness camping. When wilderness RV camping, safety is very important. Don’t park your rig until you find a safe-looking site with a low risk of flooding.

Use common sense and pay attention to your local surroundings. Assess the area. If there’s even a small chance of rain, don’t camp in a canyon or near low spots or anywhere with steep mountain walls closing in on you.

Keep a weather band radio available especially when camping in storm-prone areas. Leave before a major storm is forecast to strike.

Check weather reports. Flash floods can strike miles from the origin of a storm. Don’t assume that blue skies overhead mean it is safe. Keep an eye on the weather forecast for your region.

Know your escape route. If rain starts falling and your gut instinct is telling you to leave, take a look around to find the fastest way out to safety.

If hazardous weather prompts evacuation warnings by officials, do what is requested. If you’re lucky enough to drive your RV out of the campground, don’t waste time taking your hoses, chairs, etc. Your sewer hose isn’t worth your life.

Preparing for weather oddities and calamities is part of the RV lifestyle. Nobody expects a flash flood camping disaster but things happen fast when the water rises and it only takes minutes for a deadly catastrophe. If all else fails and you still get trapped in a campground during a flash flood, don’t try to drive your way out of it. Run for the highest ground you can find and you just might live to tell about your dramatic flash flood campground evacuation.

In the spring, I have counted 136 different kinds of weather inside of 24 hours.