At 6,288.2 feet, Mount Washington is the highest peak in New Hampshire. Ride in style to the summit on a historic cog railway that has been operating since 1869. 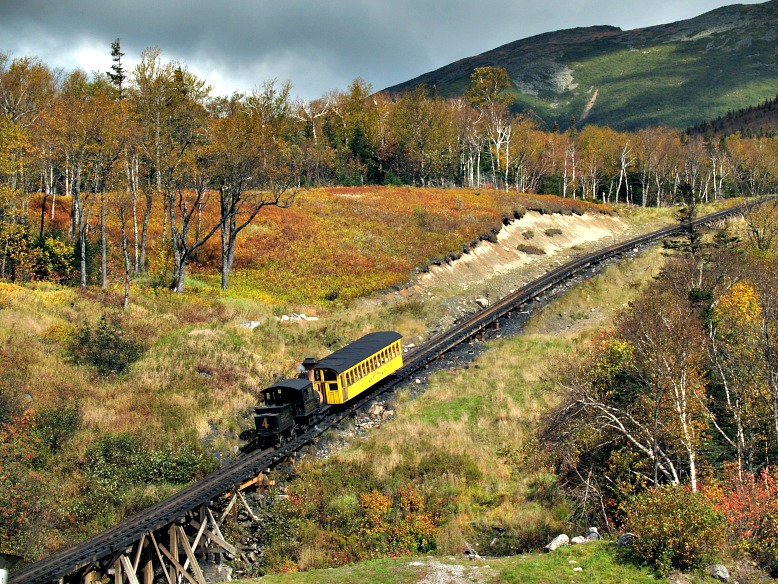 “The Second Greatest Show on Earth!” That’s what showman P.T. Barnum proclaimed in 1869 as he stepped down off the train and marveled at the view from Mount Washington’s rocky summit. High praise indeed from the man whose grand circus occupied the primary spot!

Today, more than 150 years later, the Mount Washington Cog Railway continues to attract passengers from all over the world for its dramatic ascent to the summit of the highest peak in the Northeast.

The Cog is the first mountain-climbing cog railway in the world. With an average grade of 25 percent (some sections approach nearly 38 percent), it’s also the second steepest. Motor power is primarily provided by a fleet of seven powerful biodiesel locomotives. And with a nod to its steam heritage, the railway also continues to operate a pair of coal-fired steam engines.

Located in the heart of the majestic White Mountains region of New Hampshire, Marshfield Base Station is 6 miles east of Route 302 on the western face of Mount Washington.

The adventure begins at Marshfield Base Station, elevation 2,700 feet

Marshfield draws its name from two significant historical figures: Sylvester Marsh, the visionary who created the Cog Railway, and Darby Field, believed to be the first European mountaineer to reach the summit of Mount Washington in 1642. In his time, the mountain was known to the native Abenaki people as Agiocochook (“the place of the Great Spirit”) and Waumbik or “white rocks” to the Algonquins.

Open year-round, Marshfield Station features an interactive and informative Cog Railway Museum (admission is free), a gift shop stocked with Cog gear and local specialties, and a convenience store/food court for last-minute necessities and hot and cold snacks. A wraparound observation deck provides beautiful panoramic views of the railway and the mountain.

Related article: The Uniqueness of the White Mountains

The ticket office is on the lower level and boarding gates are just outside the door. Same-day tickets are usually available but advanced reservations are always highly recommended.

There’s always plenty of free parking at Marshfield with dedicated lots for buses and RVs.

15 minutes before our scheduled departure we were lined up at our gate ready to board.

The brakeman was stationed out on the front deck for the up-mountain trip to the summit. On the return trip down the mountain, the brakeman was at the brake wheels at the other end of the coach.

After a quick introduction and safety orientation, the dispatcher cleared our train for departure. The brakeman gave the engineer the “ALL CLEAR!” signal and with the blast of smoke and steam, our excursion to the top of New England was underway.

It’s all uphill from here

Once our train has cleared the steel bridge spanning the Ammonoosuc River, we felt a burst of acceleration as the engineer brought the locomotive up to its maximum speed—5mph! Dense forest brackets the right-of-way on either side as your train makes its way up Cold Springs Hill, the second steepest part of the railway at a grade of nearly 35 percent.

The Waumbek passing loop is next, with 2,100 feet of double track governed by two solar-powered hydraulically operated switches. The second track, installed in 2000, allows as many as seven trains moving in opposing directions to operate on the mountain at the same time. Here we also saw the Waumbek Tank where our steam engine stopped briefly to top off the water level in its tenders.

Crossing the Upper Waumbek switch put the train back on single track now following a narrow ridge line. Halfway House, the elevation of 4,300 feet is on the right, and looking at the reflection of the coach in the building’s window as we passed we got a sense of just how steep the climb is here.

The Old Man of the Mountain was a rock formation on the side of Cannon Mountain that had long served as the symbol of the State of New Hampshire. That formation suddenly collapsed back in 2003 taking with it part of the state’s identity and its most popular attraction. Someone noticed a remarkable facsimile of the Old Man on Mount Washington which is next to the tracks just ahead of us at this point. They installed a white background behind it to make the old man’s profile a little clear.

And just past Profile Rock, we came out onto the most impressive part of the entire railway—a high trestle known as Jacob’s Ladder.

Jacob’s Ladder and the Summit Cone

As the train passed Profile Rock, the mountain’s true character begins to reveal itself. The dense and rocky forest on either side drops away, the air freshens and the wind picks up, and when the weather is clear you realize that the train has been following a narrow ridge between two deep chasms—Burt’s Ravine on the left and the Ammonoosuc Ravine on the right. And then just as suddenly you’re nearly 25 feet above the surface of the mountain. Welcome to Jacob’s Ladder!

300 feet long and curving to the left, the train is now climbing at a 37.41-degree grade—that’s a 37-foot elevation change for every 100 feet of forwarding movement. Jacob’s is the steepest section of the Cog Railway and the steepest railroad trestle anywhere in the world.

Once across the trestle, we passed Frog Rock, a brightly painted boulder used by train crews as a location marker in bad weather. We were now at a tree line roughly 5,000 feet above sea level and climbing along the side of the summit cone toward an area known as Skyline. As the tracks turned to the southeast and began to level out on the left we saw the Northern Presidentials: Mounts Clay, Jefferson, Adams, and Madison and beyond the mountains of western Maine.

Hiking is a popular pastime in the White Mountains and on either side of the train we saw piles of rocks or cairns marking various trails. Running parallel to the tracks on the left is the Gulfside Trail, the local stretch of the much longer Appalachian Trail (AT). The AT runs nearly 2,200 miles up the east coast from Springer Mountain in Georgia to Mount Katahdin in northern Maine.

Ahead on the right but still several hundred feet higher is our destination: the Sherman Adams Visitor Center on the summit of Mount Washington.

This is Mount Washington State Park, a 60.3-acre parcel perched on the summit of the Northeast’s highest peak and surrounded by the extensive 750,000-acre White Mountain National Forest.

After a routine safety stop at the summit switch followed by the “all clear” signal from the Brakeman, our train slowly came up over the final slope and then leveled out at the platform.

With conditions at the top quite different than those at the base station we were glad we’d brought warm jackets. Leaving the coach we noticed that it was much windier than it was at the Base Station. After all, the subarctic tundra up here is similar to that of far northern Canada and hurricane-force wind gusts occur on the summit an average of 110 days per year.

Trains layover at the summit for approximately one hour, plenty of time to explore the Sherman Adams Visitor Center and its rooftop observation deck, Extreme Mount Washington (an interactive weather exhibit), a cafeteria, and two gift shops. You can send a card to friends and family with a unique Mount Washington postmark from the summit Post Office.

Home of the World’s Worst Weather!

Much has changed since Henry David Thoreau wrote about Mount Washington’s dramatic and unpredictable weather in 1839 but the weather certainly hasn’t. On a clear day, visitors enjoy spectacular panoramic views from Quebec to the Atlantic Ocean or they may experience a taste of the “World’s Worst Weather”—it can snow on the summit even in summer. Weather is the story on this mountain.

The first weather station on the summit was operated by the U.S. Signal Service from 1870–1892. The modern observatory was founded in 1932 and on April 12, 1934, the highest surface wind speed ever directly observed by man was recorded at the summit: 231 mph! The highest temperature ever recorded at the summit is 72 degrees F and the lowest not including wind chill was -47 degrees.

Upon reboarding the train we noticed that the seats had been flipped back to face down the mountain. The locomotive was now at the lead end of the train and the Brakeman was inside at the brake wheels.

While the route down the mountain is the same, the vista seemed wider. We could appreciate the ruggedness and vast expanse of this sub-arctic terrain as it all unfolded in front of and around us.

As the tracks curved to the left and pitched over onto Long Trestle and Jacob’s Ladder the entire length of the railway could be seen ahead and below—Halfway House, the Waumbek passing loop, and Marshfield Station. We could follow the line of Base Station Road out to Route 302, the red roofs of the Omni Mount Washington Resort, and the ski slopes and gondolas at Bretton Woods.

Winter comes early to the higher elevations of the White Mountains and by the first week of October, the summit usually sees a frosting of feathery rime ice (frozen fog) and snow. Columbus Day weekend marks the end of the season for Mount Washington State Park as well as the Mount Washington Auto Road.

Shortly after the State Park summit facilities shut down for the winter, the Cog Railway summit operations cease as well. Weather permitting through the end of October and then again in the early spring, they may run trains up as high as Skyline but the primary destination throughout the winter is Waumbek Station (elevation 4,000 feet).

What New England is, is a state of mind, a place where dry humor and perpetual disappointment blend to produce an ironic pessimism that folks from away find most perplexing.