Huzzah! Her sides are made of iron! 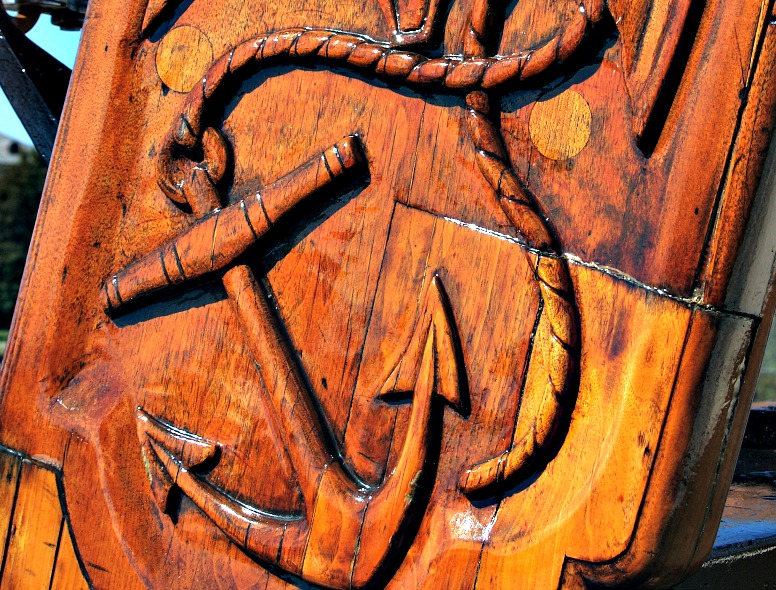 Located inside Boston National Historical Park as part of the Charlestown Navy Yard in Charlestown and part of Boston’s Freedom Trail, USS Constitution is open for public visitation, FREE OF CHARGE, throughout the year.

Before independence, the thirteen American colonies enjoyed protection from pirates and foreign navies under the British Royal Navy. However, once the United States gained recognized independence the young nation had to defend itself. Congress authorized the construction of the six warships in the Naval Armament Act of 1794. These warships became the new United States Navy. Each of the six was built at different seaports along the eastern coast.

The wooden-hulled, three-mast USS Constitution was launched from Hartt’s shipyard in Boston’s North End on October 21, 1797. It was designed to be more heavily armed and better constructed than the standard ships of the period.

The ship served initially in the French-Quasi war and later became the flagship of the Mediterranean fleet fighting its first engagement against Barbary pirates of North Africa.

The greatest glory for USS Constitution, however, came during the War of 1812. It was during this war in the battle against the HMS Guerriere the ship earned the nickname Old Ironsides when the crew of the British ship noticed their canon shots simply bounced off the ship’s strong oak hull they proclaimed: “Huzzah! Her sides are made of iron!”

Later, it continued to serve as a flagship in the Mediterranean, African, and Pacific fleets into the 1850s. During its time as African Squadron flagship, it captured its last prize, the slave ship H.N. Gambril in 1853. It was also a training ship during the Civil War and carried freight to the Paris World Fair of 1878 until it finally retired from active service three years later continuing light work until designated a museum in 1907.

The USS Constitution received numerous visitors over the years but deteriorated and required extensive restoration work again. President Roosevelt placed the ship on permanent commission in 1940 which protected the vessel somewhat from further deterioration and it was assigned to serve as a brig for officers awaiting court-martial.

The funding for true restoration finally came in the 1970s in preparation for the US Bicentennial celebrations. Indeed, an entire tract of land in Indiana was set aside to supply the white oak needed for repair work. The grand ship sailed again leading a parade of tall ships through Boston Harbor for Operation Sail firing its guns for the first time in over 100 years.

The most comprehensive and historically accurate restoration to date occurred from 1992-1996 and the ship sailed under its power for its 200th birthday in 1997 then again in 2012 to commemorate its victory over the HMS Guerriere that earned its nickname. A further restoration project was conducted from 2007-2010 which returned the ship as accurately as possible to its original War of 1812 configuration.

Today, the ship keeps a crew of 60 officers and sailors to aid in its mission to promote understanding of the US Navy’s role in war and peace. The crew is all active-duty Navy sailors—an honorable special duty assignment. It is also crewed, maintained, and restored by the civilian Navy staff of the Naval History & Heritage Command Detachment Boston.

In addition to the USS Constitution itself, there is also a museum you can visit which has a lot of interesting artifacts and exhibits covering the history of the landmark. Whether you’re interested in period artwork, arms, and armament from the time, navigation equipment that was used hundreds of years ago, or historic texts describing the story of Old Ironsides, there’s plenty to see here that will please any history buff.

Know before you go

An excellent way to get there is by using the MBTA Water Shuttle which is a bargain at $3.25.

If you have an MBTA Subway Pass it is free and is a short boat ride over to Charlestown which also doubles a scenic harbor cruise.

A shuttle departs from Boston’s Long Wharf at the New England Aquarium and will whisk you over to the USS Constitution in 10 minutes.

Ay, tear her tattered ensign down!

Long has it waved on high,

And many an eye has danced to see

That banner in the sky;

Beneath it rung the battle shout,

And burst the cannon’s roar;—

The meteor of the ocean air

Shall sweep the clouds no more!