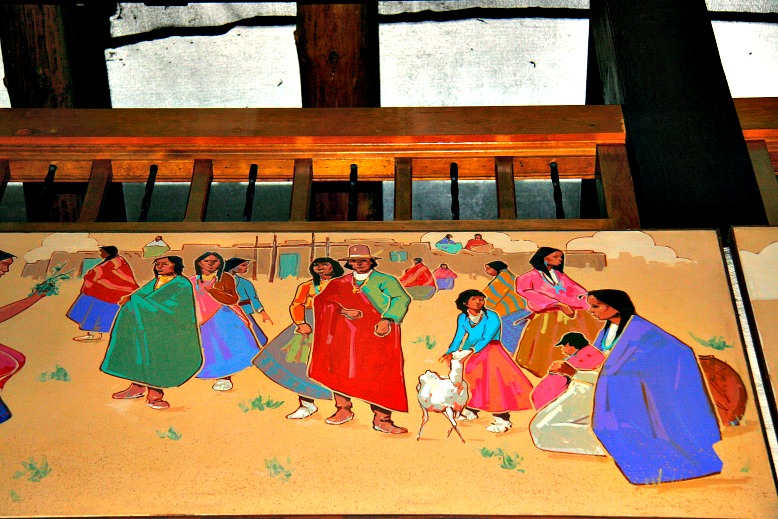 Santa Fe, New Mexico is a city unlike any other truly living up to its tagline, The City Different. With legendary history and culture around every corner, an art scene that spans from traditional to contemporary, award-winning cuisine that’s as eclectic as it is sumptuous, and countless experiences to encounter you’re sure to uncover something different about yourself when you visit.

Established back in 1607, Santa Fe first became a capital three years later making it both the oldest capital city in the country and the oldest European settlement west of the Mississippi. It also served as the capital of the Spanish Kingdom of New Mexico, the Mexican province of Nuevo Mejico, and the principal city for the Spanish Empire north of the Rio Grande.

Of course, people had been living on and near the site of the city long before its Western founding—namely, communities of Pueblo Native Americans. Records show villages in the area dating back to the 11th century.

Experience it: Remarkably, buildings from the start of the Spanish era still stand. The Palace of the Governors has stood since the early 1600s—today, this historic adobe structure serves as New Mexico’s history museum detailing the intervening 400-some years of life in the state. There’s a wonderful (daily) Native American market here where you can buy jewelry and tokens straight from the artists.

The San Miguel Chapel, aka the oldest church in the country or just “the oldest church” also dates back to the early 1600s. Yes, it’s still standing—and conducting services twice a day (once in Latin).

As in the 1600s, so today: A significant part of Santa Fe’s culture is connected to the 23 Native American Tribes, Nations, and Pueblos who reside in New Mexico. Since each tribe comprises its sovereign nation, the rules, language, and culture change depending on who you’re visiting. Eight of the state’s 19 Native American Pueblos are located north of Santa Fe. Today, you can visit many of them—and you should.

Experience it: Numerous Indigenous celebrations are held throughout the year with three notables in January alone: King’s Day Celebration, St. Ildefonso Feast Day, and St. Paul’s Feast Day. Public events ramp back up in July and August with the anniversary of the 1680 Pueblo Revolt and Santa Clara Feast Day (August 12, 2022).

The Pueblo Revolt of 1680 was a revolution against Spanish religious, economic, and political institutions imposed upon the Pueblos. It is the only successful Native uprising against a colonizing power in North America.

La Fonda Hotel doesn’t just occupy the oldest hotel site in Santa Fe—it occupies the oldest hotel site in the country. Records date way, way back to 1607, right around when the city was founded. The digs inside are a bit more modern, however—their much venerated La Plazuela restaurant serves tasty, tasty, tasty modern Southwestern cuisine surrounded by skylights and the hammered tin of a 1920s-era patio. For some amazing margaritas try the adjacent La Fiesta Lounge (it happens to be a favored stop on the Margarita Trail).

Thanks to its old roots, La Fonda (Spanish for “the inn”) is the only hotel on the historic Santa Fe Plaza making it an excellent launching pad for exploring the heart of the city’s downtown buzz. Here’s what you’ll find nearby.

The Cathedral Basilica of St. Francis of Assisi, a Victorian-era cathedral built by Archbishop Lamy and featured in Willa Cather’s Death Comes for the Archbishop (yes, that Archbishop). If it looks incomplete, that’s because it is—the project ran out of money and the two towers were never finished.

The Palace of the Governors, once a fortress where Governor Lew Wallace wrote the classic Ben Hur is now a 400-year-old museum where members of the local Pueblo communities display handcrafted jewelry under its block-long portal.

Considering just how many people work in the creative sector in Santa Fe, it’s no surprise that some of them are well-known faces. Perhaps the most famous of the local artist contingent was Georgia O’Keeffe, a 20th-century painter known for her vibrant depictions of flowers. Game of Thrones writer George R.R. Martin currently resides in Santa Fe and other notable past residents have included D.H. Lawrence and Willa Cather.

Visitors are drawn to Loretto Chapel to see the spiral staircase that leads to the choir loft. The staircase—with two 360-degree turns, no visible means of support, and without the benefit of nails—has been called the Miraculous Staircase.

Experience it: It would only be fitting to see O’Keeffe’s work in the place that inspired it. The Georgia O’Keeffe Museum, located downtown, features not only her paintings but exhibits on her creative process as well. You can also venture north to Ghost Ranch, one of O’Keeffe’s first homes.

Get the full picture of the city’s cultural diversity with a visit to Museum Hill. These are four cultural experiences in one: Start with the retablos and Santos at the Museum of Spanish Colonial Art (the only museum of its kind in the country), and move on to the Kachina carvings and pottery at the Museum of Indian Arts and Culture, note the colors and textiles at the Museum of International Folk Art, and wrap it all up with a wander around the Wheelright Museum of the American Indian, home to some of the best Native American art in the state.

If you have time to spare, head to the Santa Fe Botanical Garden on Museum Hill. It’s a little oasis full of colorful gardens and orchards, native plants, and notes of Southwestern architecture that bring it all together.

For 400+ years, Santa Fe has improved with age. America’s oldest capital city experienced waves of migrations along the three trails that led here—and more recently via the rails, Route 66, and the Interstate. Artists, chefs, wellness experts, and other creative dreamers all bring their culture, talents, and experience with them when they meet Santa Fe’s unique blend of Anglo, Spanish, and Native Cultures against a backdrop of the Sangre de Cristo Mountains’ majesty and the spectacular sunsets over the Jemez range—nothing short of magic transpires.

The early Native American inhabitants called it Dancing Ground of the Sun while the founding frontiersman at the turn of the 20th century referred to it as The City Different. These still hold today as you’ll see for yourself.

Wander the halls of the New Mexico Museum of Art, Georgia O’Keeffe Museum, and Museum of Contemporary Native Arts, or check out the more than 250 galleries concentrated on Canyon Road, downtown Lincoln Avenue, and Railyard District.

Whether you’re hitting up a local-favorite diner for traditional New Mexican cuisine or looking for one of the city’s many imaginative twists on the original, New Mexican food is hard to beat. The keystone ingredient is chile—green is usually spicier than red but if you’re not sure which one to order, you can always say “Christmas!” and try both. (Tip: Try both and decide for yourself)

Related article: Top 9 Things to See and Do in Santa Fe

Experience it: Eat everything you can in Santa Fe. Try a breakfast burrito smothered with green chile at Tia Sophia’s then head over to Tortilla Flats— next to Meow Wolf—for their red chile pork ribs. If you aren’t busting at the seams with New Mexican food by this point, go for the sopapillas at La Choza.

If you hit your chile quota (apparently some people have one) try Jambo for some great jerk chicken or Cowgirl BBQ for their ribs sans chile. To get the best deals at tons of different restaurants around town, consider planning a trip during Santa Fe Restaurant Week (late February) when restaurants offer special prix fixe menus.

I’m in love with Santa Fe;

But I wonder, every minute

How the folks who aren’t in it

Ever stand it, anyway.

Not to be in Santa Fe.