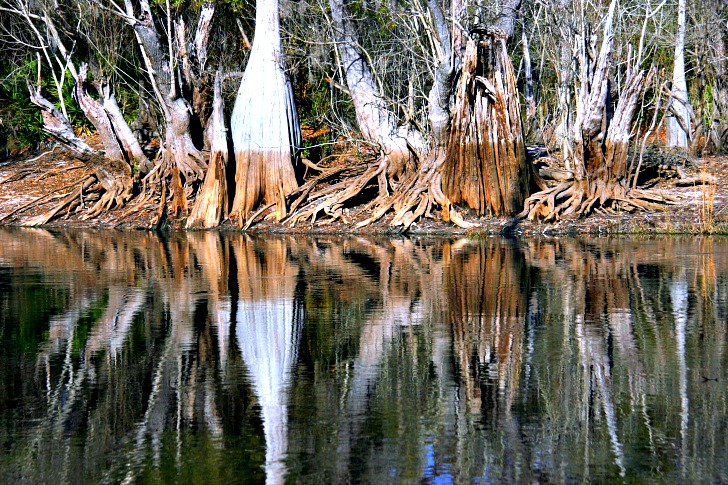 There’s one thing you know for certain: you’re looking to get away, get outdoors, and go exploring. But where are you going? Chances are you want to visit a place where the natural world is front and center which means state parks and national parks are two of your best options. These special, protected environments are available for public use and offer plenty of opportunities for exploration, recreation, and adventure. Whatever outdoor activities you’re enthusiastic about it’s guaranteed that both national and state parks afford plenty of access to a variety of great places to pursue them.

But in any case, you have no bad options! No matter which type of park you choose to visit, you’ll be able to explore endless trails, campsites, and outdoor adventure opportunities. So make your choice and get out there!

In the southeastern corner of Georgia lies the Okefenokee Swamp, a 438,000-acre wetland. The cypress-filled wilderness—with its labyrinth of black canals inhabited by some 12,000 gators—is a long drive from anywhere. The Native Americans aptly called the swamp the “land of trembling earth” because the unstable peat deposits covering much of the swamp floor tremble when stepped on.

Spanish moss-laced trees sway in the breeze. A carpet of yellow bonnet lilies floats on top of the glossy dark waters of this refuge, home not only to alligators but also to turtles, black bears, herons, and many other creatures. At night, you hear the barred owls hooting deep within the forest.

More on state parks: 16 of the Best State Parks in America

One noise missing is the beep-beep of mobile devices. Cell phone service is spotty at best and honestly, you’ll be delighted by a break from the digital world.

Visitors have three main entry points to choose from, each about two hours from the next. Stephen C. Foster State Park is the western entrance to the Okefenokee. It’s nestled within the much larger Okefenokee National Wildlife Refuge but it offers much that the bigger reserve does not include campsites with electrical hookups, running water, and access until 10 p.m.—a plus for the stargazers attracted by its International Dark Sky designation in 2016. The park is 18 miles from the closest town of Fargo, Georgia.

Park staff removed 13 streetlights and switched many bulbs to light-emitting diodes (LED). They worked with a local power company to install state-of-the-art lighting which casts downward rather than outward. The staff even retrofitted outdoor lighting on park cabins to be motion-activated.

These days, Okefenokee’s 120 acres of state park have more fans than ever. Since the pandemic started, they’ve seen an uptick in visitation even in the summer when numbers are normally low. That’s no anomaly. As travelers seek new options for enjoying the outdoors, state parks across the country have reported rising attendance.

Surprisingly, as of 2019, they were already welcoming about 2.5 times more visitors than their higher-profile, federally funded counterparts despite having only 16 percent of the acreage. While many state campgrounds do book up fast, a relatively local audience means that visitors at this southern George park tend to be more evenly distributed throughout the year which preserves the low-key, less crowded atmosphere. People can be out relaxing in nature without encountering the Instagram swarms angling for photo ops in the more famous parks.

Crowd volume is also helped by the simple fact that there are more state-run options for travelers to choose from. America’s State Parks alliance tallied nearly 6,800 reserves while the National Park System manages just 423.

More on state parks: 12 of the Best State Parks for Summer Camping

As national parks introduce timed entry tickets and day-use reservations in an attempt to tackle overtourism these laid-back siblings feel all the more inviting. Of course, 50 states mean 50 different systems for camping permits, and from park to park amenities are even more variable. Some sites are tricked out with golf courses, zip lining, and RV hookups; others, such as Maine’s Baxter and California’s Sonoma Coast state parks don’t even have running water.

As demand grows, so, too, do the choices. Texas’s first new state park in 25 years, Palo Pinto Mountains will open next year on nearly 5,000 acres halfway between Abilene and Fort Worth. Visitors will be able to hike, bike, and ride horses over the hills. There will be fishing and canoeing on Tucker Lake and campsites where you can stargaze. Once the park opens, one of the first things visitors will see is a sweeping view of the hills from a road built along a ridge. That was on purpose—to awe people on their way in and out.

And Michigan just announced $250 million in funding for state parks including $26.2 million to create one in Flint—a key investment in the community as it continues to move past its water crisis.

Older sites are getting new energy, too. Fall Creek Falls State Park in Tennessee opened a $40.4 million, 85-room lodge this past January.

In five Minnesota parks, all-terrain electric wheelchairs with continuous-track treads for navigating rugged ground will be bookable as of this summer.

Still, state parks grapple with the same challenges national ones do—and then some. One big concern is having enough help to manage maintenance, ticketing, and other operations.

Pennsylvania recently announced the creation of three new state parks. The state’s 2022-23 spending plan includes $56 million to add the new state parks to what is currently a 121-park system. The three will be the first new state parks in Pennsylvania since 2005 not counting Washington Crossing which was transferred from the state Historical and Museum Commission. The money will also help develop the state’s first park for the use of all-terrain vehicles and similar motorized recreational vehicles.

Delaware State Parks which have been filled with a growing number of visitors in the past few years is getting $3.2 million to upgrade some facilities. The goal is to increase the number of attractions in the popular state parks drawing even more tourists to the state. A record-breaking 8 million people visited state parks in 2021 exceeding previous attendance numbers. State officials say this year’s numbers are on track to top that total. Since 2011, reservations and occupancy for camping nights in the parks have grown 124 percent. In 2011, 67,000 nights were reserved, while last year, total reservations approached 150,000.

More on state parks: 7 of the Best State Parks in Texas to Take Your RV

When your spirit cries for peace, come to a world of canyons deep in an old land; feel the exultation of high plateaus, the strength of moving wasters, the simplicity of sand and grass, and the silence of growth.