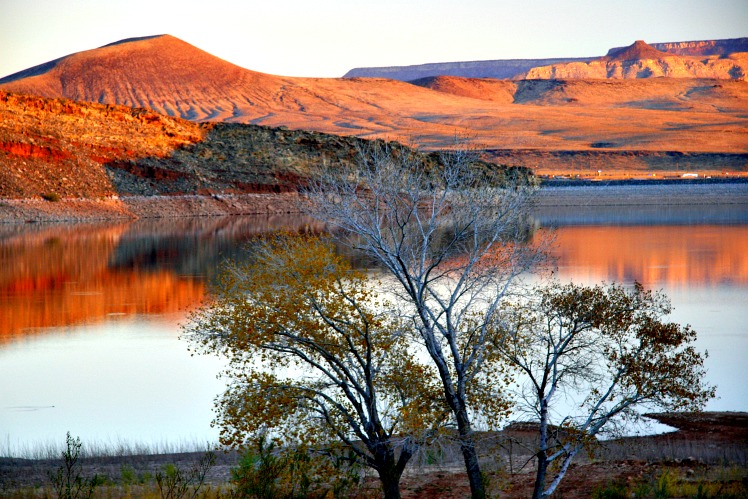 Even the most traveled RVers have inevitable gaps on their “where I’ve been” map. It’s a big country out there and clocking all 50 states is a fairly universal bucket list goal. Still, some of the less known states are passed over—and that is a shame. Now more than ever, we’re daydreaming about hitting the Interstate in search of wide-open spaces, desert expanses, serene beaches, stunning mountain vistas, and near-empty hiking trails.

After crunching the numbers I’ve identified 11 of the less-visited states, many of which were obvious, some of which were shocking. Digging deep to find out what makes each a destination in its own right: small-town charm, amazing food, fantastic beer, and sweeping landscapes.

Looking for a hidden gem? Then make a plan to visit these roads less traveled!

Why you should visit: For some ungodly reason, Idaho is forever associated with its primary agricultural product. And look, I love taters as much as the next person. But find yourself on the shores of Redfish Lake with the snow-capped peaks of the Sawtooth Mountains reflecting in clear waters and you won’t be thinking about your next meal. You’ll be thinking about how Idaho is darn near perfect and wondering where all the people are.

It’s got all the jagged mountains, wild whitewater, and pristine lakes of places like Colorado or California but it doesn’t pack in the hordes of tourists. While everyone else is clogging up Jackson Hole, an easy jaunt over the Tetons and the Wyoming state line will drop you by two of the best small towns in the state, Driggs and Victor. Spots like Stanley and Coeur d’Alene are also cool resort towns with friendly people and spectacular scenery. And of course, there’s brewery-packed Boise that’s one of the most underrated places to live in the US.

Why you should visit: There are sports to be watched, history to be learned, and great food to be had in Boston but it’s the boatloads of seaside towns that make shockingly under-touristy Massachusetts such a gem.

Amble around little Cape Ann fishing villages like Rockport where you can hang with lobstermen and chow down on some fresh, fresh seafood. Cape Cod and Martha’s Vineyard are the more well-known escapes with spectacular seal- and shark-watching opportunities along the National Seashore.

For a whirlwind tour, hop on a train from Hyannis to Buzzards Bay on the Cape Cod Central Railroad, an oceanside journey that ambles through cool little towns and cranberry bogs. The town of Salem is extra fun to visit around Halloween; history nerds should also visit Plimoth Plantation and Old Sturbridge Village, two living museums from the colonial era.

Why you should visit: Oregon’s presence on this list proves that many have yet to discover this Pacific Northwest dreamland and even those who know Portland likely have no clue to the scope of the state’s wonders. Oregon packs a massive diversity of ecosystems into its borders from a coast overflowing with natural beauty and shorelines to the dense forests blanketing the land.

Why you should visit: In Alabama, you can drink in two states at once at the Flora-Bama bar near Orange Beach or participate in its famous annual mullet toss (fish, not hair). If you’re not into throwing fish and/or drinking, you can explore 35 miles of gorgeous coastline, most notably, Gulf Shores, the prettiest place in the state and home to Gulf State Park. Truly, this is a state that at once embraces its stereotypes (“roll Tide!!”) and shatters them.

There are landmark historical sites from the Civil Rights movement all across the state including the Civil Rights Institute and the famous 16th St Baptist Church in Birmingham plus the National Voting Rights Museum in Selma. There’s also baseball history—the oldest stadium in America is Rickwood Field in Birmingham. And pay homage to one of the greatest to play the game at the Hank Aaron Childhood Home and Museum in Mobile (located at Hank Aaron Stadium).

Finally, the largest space museum in America is in Huntsville. The U.S. Space & Rocket Center is home to the famous space camp.

Why you should visit: Get some inspiration by taking the cliff walk through Newport’s historic mansions. Rhode Island boasts 400 miles of coastline (it’s not called the Ocean State for nothing) and some of the warmest water in New England.

If you’re still hanging in Newport, Second Beach is your move for a day on the water. To round things out, you’ve got the Pawtucket Red Sox (or Pawsox)—a fun minor-league alternative to Fenway—way more breweries and distilleries than a state its size needs. Oh yeah, and Del’s Frozen Lemonade. Do NOT leave without trying a Del’s Frozen Lemonade.

Why you should visit: This is the birthplace of American music. Start your sonic education in Tupelo (Elvis did) where you can walk up three different music trails—through cotton fields, churches, train depots, and nightclubs—to learn about the roots of blues and country music.

Mississippi is also home to three of the five driving trails on the Americana Music Triangle, a 1,500-mile highway route through five states with historical stops related to countless genres of music from the region including blues, jazz, country, rock & roll, R&B/soul, gospel, Southern gospel, Cajun/zydeco, and bluegrass.

There are also 26 miles of pristine water and white sand beaches here without anywhere near the number of tourists or tacky T-shirt shops you’d find in Florida. And unlike other beach towns on the Gulf, Biloxi, Gulfport, and Bay St. Louis have casinos.

Why you should visit: Teddy Roosevelt loved North Dakota so much that he bought a ranch here then made it a national park. Today, North Dakota has 63 national wildlife refuges and 13 state parks and offers visitors the chance to see not only pronghorns and buffalo but the world’s largest buffalo—Dakota Thunder—can be seen at the National Buffalo Museum in Jamestown.

But it’s not all rural land and Bull Moose. Fargo is one of America’s most underrated cities tucked into an overlooked state. Amid its highly walkable streets, you’ll find a food scene that goes beyond hot dish and into fine dining and international fare plus a vibrant brewing community.

Why you should visit: While it’s easy to make a case for Utah being America’s most stunning state, surprisingly it remains under-visited. Yet it’s been at the forefront of daydreams thanks to its otherworldly landscapes, unmatched stargazing, and relative isolation. Time to pack up the RV and see what the fuss is all about!

Utah’s open landscapes can be tackled in several ways whether it’s via a journey through the Mighty Five— Zion and Bryce among them—hiking its equally mind-blowing state parks or cruising a scenic stretch of road like the Hogsback (Scenic Byway 12).

For a more metropolitan experience, the cities are stereotype-smashers: Against the backdrop of its gorgeous namesake, Salt Lake City has emerged as a preeminent western destination placing it on the top tier of relocation wish lists. Park City, meanwhile, is so much more than Sundance: a world-class ski destination and postcard-perfect mountain town. Regardless of where you land, one thing remains constant: Wander in any direction and you’ll likely be greeted by an image that will sear itself into your memories.

Why you should visit: They don’t call the Mountain State “almost heaven” because of the strip clubs though the state does boast the most per capita of any state in the Union. It’s because of stunning outdoor attractions like the 25-mile North Fork Mountain Trail—one of the few trails labeled as “epic” by the International Mountain Bicycling Association—where you can ride backcountry ridges whilst soaking up the views over Seneca Rocks.

If you’re into water sports, brave the Gauley River, one of the five best whitewater rivers in the world and home to a 14-foot raftable waterfall. Or visit the newly-minted New River Gorge National Park. If you’re into land sports, catching a football game at Mountaineer Field in Morgantown (especially at night) is one of the most unique experiences in college football.

Why you should visit: South Dakota is one of the country’s most beautiful states. It’s also one of its most misunderstood. But once you’re here, you’ll discover why all those Smash Mouth fans keep coming to Sturgis every summer.

Take a drive along the Needles Highway near Mount Rushmore National Memorial through fascinating rock formations or drive any stretch of the Badlands to see scenery like nowhere else in the world. Custer State Park is one of the few places in America where buffalo on the road can cause a traffic jam; the annual Buffalo Roundup takes place here when thousands thunder through the park as rangers round them up for medical checks and counts.

SoDak’s roadside attractions are also among the quirkiest in America. Take I-90 east from the Black Hills and you’ll pass ghost towns, a dinosaur sculpture park, the famous Wall Drug, and the World’s Only Corn Palace in Mitchell. You’ll end up in Sioux Falls, one of those small cities that feels a hell of a lot bigger than it is, and a great place to spend a weekend.

Why you should visit: More or less everything you’ve heard about Vermont is true: This is a state that takes tremendous pride in its artisan everything, so much so that if you sit down for a meal at one of Burlington’s fantastic restaurants, you’ll likely discover everything from the garnish to the cheese to the chair you’re sitting in was made by some master craftsman in the same zip code. The craft beer scene is unparalleled, a true destination for beer nerds where hazy IPA pioneers The Alchemist holds court alongside legends like Hill Farmstead and the actual Von Trapp family who ensure the hills are alive with lagers.

It’s a land of general stores, covered bridges, sugar shacks, ski towns, and vast wildernesses. There is no place where the leaf-peeping is as vivid. It’s exactly what you expect, yet somehow so much more.

My favorite thing is to go where I’ve never been.