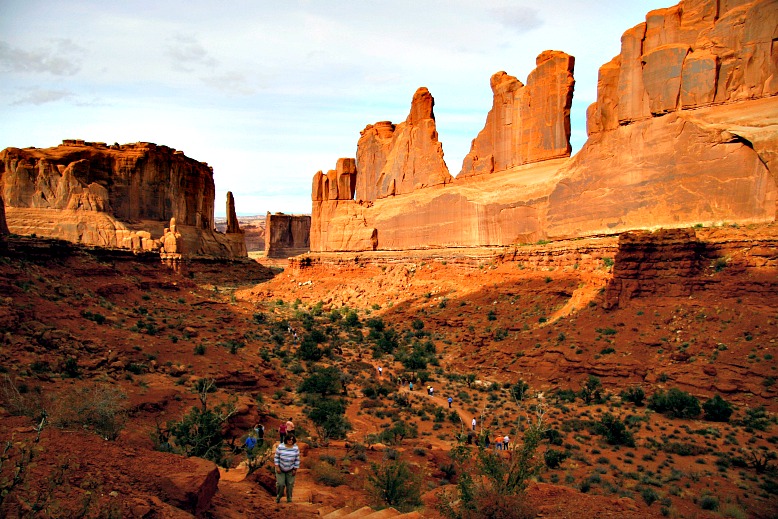 Arches should be on everyone’s list of “must-see” national parks. While the park is most well known for having over 2,000 arches including the famous Delicate Arch and Landscape Arch there is more to see than just the arches. Park Avenue is the first stop after entering Arches National Park and is a great way to start your visit.

Park Avenue is a one-mile trail that follows the bottom of a canyon at the feet of some of the park’s gigantic and well-known monoliths. With sandstone walls that rival New York City skyscrapers, this easy, two-mile out-and-back along Park Avenue shows how wind and erosion can create a variety of rock sculptures.

The Three Gossips, the Courthouse Towers, Queen Nefertiti, Queen Victoria Rock, the Organ, and the Tower of Babel are all visible from the road as visitors drive up towards Balanced Rock and Delicate Arch but there is a large difference in experience when walking through them. All of these natural wonders are famous and often photographed.

More on Arches National Park: A Wonderland of Arches…And So Much More

The Park Avenue Trailhead is located on the Arches Entrance Road 2.5 miles north of the visitors’ center off to the left (north) side of the road. From the parking lot check out the La Sal Mountains in the distance before heading down a paved trail to the Park Avenue overlook. The parking lot has a paved walkway that heads 320 feet to a Viewpoint. From there, a well-worn trail heads down the Avenue and towards the Courthouse Towers Parking Lot.

As you leave the parking area, you’ll follow a wide, paved trail for about 100 yards to a viewpoint of Park Avenue. Many visitors are satisfied with the view from here which is impressive but if you want to understand how this area got the name Park Avenue one has to drop down and walk the Park Avenue trail to feel the immensity of the sandstone monoliths on either side. The real Park Avenue is a wide boulevard in Manhattan Island in New York City with soaring skyscrapers on either side of the avenue.

At the overlook take in the expansive views of the 300- to 400-foot-tall red rock walls that line the wash below. To the right is a deep notch carved into a fin; bulky rock formations sit to the left and Courthouse Towers (an assortment of tall stone columns) rise in the distance. Take the stone steps from the overlook to continue the hike.

After enjoying the view from the Park Avenue overlook descend the rock steps to begin the hike. A “Primitive trail beyond this point” sign sits beside the trail but don’t let that deter you from this well-worn trail.

The easy trail from the Park Avenue overlook descends some well-maintained path to the floor of Park Avenue. Once on the canyon floor, look around in all directions. Beneath your feet are ripples in the rock and above are towering red cliffs, balanced rocks, and tiny holes in the rocks. Desert shrubs and juniper trees are sprinkled in the red sand throughout the canyon. As the trail makes its way to the road, Courthouse Towers comes into view. Once the trail meets the road, turn around and hike back.

It is a one-mile hike down through the sandstone monoliths to the end of Park Avenue. There is another parking area there where groups that have more than one car can park so it becomes a walk-through hike instead of an out-and-back hike. If you only have one car and it’s parking at the Park Avenue viewpoint it will be two miles down and back. Along the way, hikers are treated to great views along the trail of the Courthouse Towers which is composed of formations of The Organ, The Tower of Babel, The Three Gossips, and Sheep Rock.

The Three Gossips may be the best name for a rock formation that I’ve ever heard. What a clever description! One of the things that I like about Arches National Park is that there are so many clever names for the arches and formations. Sheep Rock is a clever name too! That rock looks exactly like a sheep!

Park Avenue is best photographed in the later afternoon for the deep colors on the canyon walls. Morning is an excellent time to photograph, The Organ, Sheep Rock, The Tower of Babel, and The Three Gossips.

This was my very first hike in Arches National Park and even though there are better-known hikes in Arches, this one is a special one for me.

This is a hike that children will enjoy as well as experienced hikers. This stop will only take about an hour to see and complete. I highly recommend to those visiting Arches National Park to take the time to at least stop at the Park Avenue viewpoint.

The massive sandstone towers that make up the western background of Park Avenue are called the Courthouse Towers. Like the prows of enormous ships, these landmarks jut out into the desert below, some of them over 600 feet tall.

The Organ is a smaller monolith just to the south of the Tower of Babel off to the right side of the Arches Entrance Road. The Courthouse Towers parking lot sits off to the west flank of the Organ.

The Tower of Babel

Hiking time: 30 minutes to one hour

Note: This hike has parking lots at both ends, so if you’re short on time and have two cars, you can turn this into a shuttle hike.

These arches are of thrilling beauty. Caused by the cutting action of wind-blown sand (not stream erosion), one marvels at the intricacies of nature.