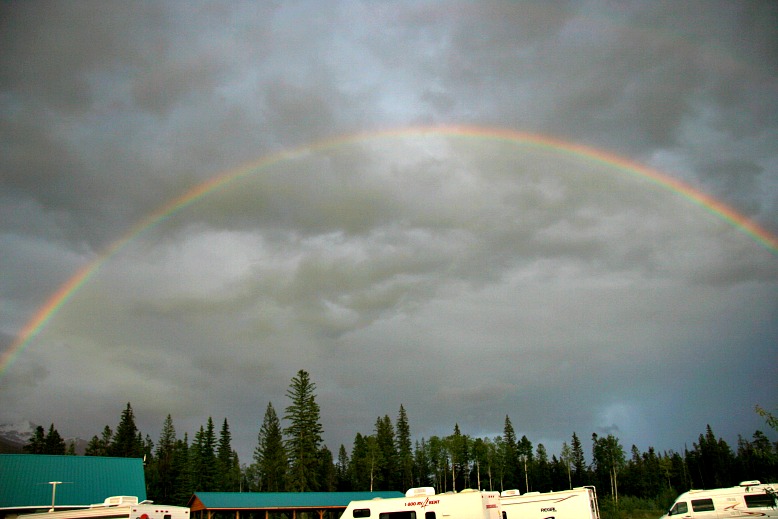 How safe is an RV in a lightning storm? That’s a loaded question and one I’m here to answer. There are many myths about RVs and lightning. What’s important is that we’re all armed and ready to do what’s legitimately called for in a lightning storm when we’re in an RV.

Preparedness is everything where safety is concerned, so let’s get right to it starting with the most basic.

According to the NOAA National Severe Storms Laboratory, lighting is defined as “a giant spark of electricity in the atmosphere between clouds, the air, or the ground”.

In short, lightning is an extremely powerful electrical discharge that occurs during a thunderstorm. When lightning strikes the air becomes extremely hot—and when I say “extremely hot” I mean around 50,000 degrees F—far hotter than even the surface of the sun!

The thunder you hear is the heated air the lightning is passing through expanding quickly. Effectively, it’s like the boom generated by a supersonic plane.

Lightning can occur between clouds (cloud to cloud), from cloud to air, or from cloud to ground. Cloud to the ground is the type of lighting we’re most concerned about as it’s the most dangerous to us while we’re in our RVs.

Now let’s get into how safe an RV is in a lightning storm.

How safe is an RV in a lightning storm?

There’s no getting around it—lightning storms can be extremely dangerous. If you’re in an RV, the key to your safety depends on the materials your rig is made of and the actions you take.

First, if your RV’s frame or roof—or the entire skin/outer structure—is made of metal/aluminum/steel you should be safe from lightning when you’re inside. Your electronics may take a hit unless you’ve disconnected them but the people inside the rig should be safe. And the good news is that many if not most modern RVs do have a metal frame.

More on severe weather: 6 Things You Need To Know about Camping in a Storm

If your rig has a roof made of aluminum or steel you’ll likely be safe inside your RV in a lightning storm. And if your RV roof is made of fiberglass but the frame of the rig is made of steel you’ll still be well protected.

If your RV is made entirely of other materials like wood or all-fiberglass then you’ll be safer inside your tow vehicle/toad. Contrary to popular belief, metal doesn’t attract lightning but it is very much capable of reducing its destructive impact by channeling it away and toward the ground.

And when metal forms a “cage” of sorts, it offers even more protection. More on that in just a moment. First, another note about metal.

Is it true that lightning only strikes metal?

Nope, that’s a myth. Lightning isn’t drawn to metal and it certainly doesn’t only strike metal. In fact, experts with the National Weather Service agree that metal has no bearing on the attraction of lightning.

In fact, the height of an object, the shape of an object (pointy), and isolation are the three primary factors that determine where lightning is most likely to strike. We’ve heard of lightning striking trees, for example. That’s because they tend to be all three things: tall, pointy, and isolated from other tall objects.

What is a Faraday Cage?

So, the metal “cage” structure of cars provides particular protection against lightning due to a concept known as the “Faraday Cage”. This would also be true of any RV with a metal frame/“cage” but not all RVs are built in this way. So, if your rig doesn’t have steel/aluminum framework you should seek shelter elsewhere immediately.

Essentially, the Faraday Cage refers to the fact that a car is a large metal cage that conducts the lightning AROUND the outside metal instead of THROUGH the inside of the car. This isn’t new information. This goes all the way back to Benjamin Franklin in the mid-1700s. The principle was refined by a scientist named Michael Faraday in 1836 thus the name “Faraday Cage”.

The first takeaway here is clear: the protection offered by the Faraday Cage effect is the reason you’re safe inside a car during a lightning storm. Again, the same would apply to an RV with a metal frame or roof but if you’re camping in an RV made of other materials such as only wood and fiberglass, seek shelter elsewhere in a lightning storm.

However, the second important thing to remember is that the presence of the Faraday Cage doesn’t mean that the vehicle can’t be struck by lightning or impacted by lightning. It means that you’re safe INSIDE the vehicle (so long as you’re not in contact and/or close proximity to any metal connected to that outer “cage”).

If you’re outside of a vehicle that has been struck, DO NOT touch the vehicle. The people inside are safe. But if you touch the vehicle, you may not be. If the strike has just occurred and the metal is still electrified you could be shocked if you walk up to the vehicle or touch it.

What should I do if I’m inside my RV in a lightning storm?

How safe your RV is in a lightning storm will largely depend on what you do. There are several protective actions you can take if you’re inside your RV during a storm.

One of the most important things you can do to protect yourself is something you can do right now and that is to learn something about the construction of your RV so that you’ll know when the time comes whether you’re safe to remain inside your rig or whether you need to take shelter in your toad/tow car.

Here are several other actions you can take to increase your safety in a lightning storm:

Move away from trees

Always move away from trees. This is very important. Not only can trees or branches fall onto your RV in windy storm conditions but trees are tall and pointy and sometimes isolated. You may recall that these are the three most likely factors to attract a lightning strike.

You don’t want to be near trees in your RV during a lightning storm. Even if you’re taking shelter in a car, move that car away from trees. While you may be perfectly safe from the lightning itself inside a car or RV, you’re not safe from falling trees. And being crushed is likely no more fun than being electrocuted!

Move away from water

If your RV is parked on the beach, lakeside, or riverside, move your RV up to a parking area or other safe location. Just remember to look around for flag poles, light poles, trees, and other tall, pointy structures, and stay away from them as well.

Unplug your RV from electrical outlet

In preparation for a lightning storm, one of the first things you’ll want to do is disconnect your RV from any electrical outlet. DISCONNECT the RV from the electrical outlet before the storm comes close.

The reason for this is to protect your RV’s electrical system and the electrical/electronic components connected to it from potentially damaging surges caused by lightning striking nearby. So, if possible, unplug appliances and disconnect or shut down electronics.

More on severe weather: Hail Can Be a Killer Especially For Your RV

Again, if you’re inside an RV with a metal roof or metal frame, or if you take shelter in your tow vehicle or elsewhere, you’ll be safe. But to avoid damaging your RV’s electronics, you’ll want to be as disconnected as possible.

Bring in awnings and bring down antennas

Antennae are the tall, pointy, isolated lightning attractors I warned you about earlier. Bring them in ahead of the storm and store them safely. Awnings should never be left out in inclement weather, anyway… since wind or heavy rain can easily damage them.

During the storm remain in the center of your RV as far away from windows and doors as practical. Doors and windows are the least safe zones of your RV and staying away from them mean you’re safer.

This is due to two things: (1) window and door frames are almost always metal and as such are a point for you to come into contact with electricity from a lightning strike and (2) high winds from the storm could hurl objects into/through the windows potentially injuring you.

Keep your family, pets included, in the center of the rig until the storm passes.

The ability to stay informed of the storm’s arrival and passage is critical. Your smartphone may be capable of delivering that information to you via apps like Storm Shield or NOAA Weather Radar Live (look for the “Clime: NAA Weather Radar Live” app in your device’s app store) can keep you abreast of important information. However, if a cell tower is rendered incapable of offering you a connection or if you’re simply not in an area where you have good cell service your smartphone won’t be useful.

For this reason, it’s always a good idea to travel with (or even to have at home) an emergency weather radio. Some are able to operate on batteries and/or by crank and will give you access to AM radio stations and emergency broadcasts.

Drive to a stronger shelter

And finally, if you’re not safe where you are, you need to drive to a stronger shelter. If you can get to a department store or any type of public building to take shelter, you’ll be increasing your safety and that of your family members.

Surely this goes without saying, but I’ll say it anyway—never, ever leave pets in your RV if you take shelter in another building. Even if pets aren’t typically allowed in a grocery store where you’re taking temporary shelter, for example, bring your pets with you but be sure to keep them leashed or caged (depending on the pet), and keep complete control of your pets at all times inside the building.

In the spring, I have counted 136 different kinds of weather inside of 24 hours.