All you need to know about trails, campgrounds, and mountain adventure 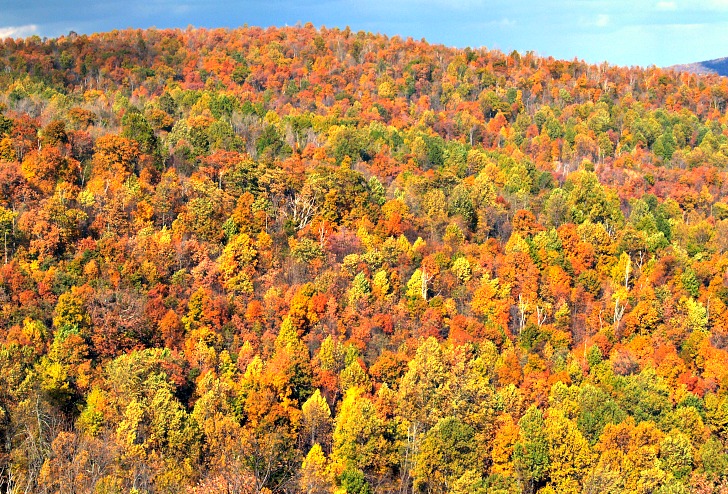 What makes Shenandoah so special? First, consider panoramic views from overlooks scattered on lofty Skyline Drive which runs 105 miles down the length of the 300-square-mile sanctuary. Additionally, beyond Skyline Drive lies another Shenandoah where bears roam the hollows and brook trout ply the tumbling streams. Trail-side flowers color the woods. Quartz, granite, and greenstone outcrops jut above the diverse forest allowing far-flung views of the Blue Ridge and surrounding Shenandoah Valley. It is this beauty near and far that creates the unforgettable Shenandoah experience.

Shenandoah—the first of Virginia’s national parks—was dedicated on July 3, 1936. Cobbled together along the Blue Ridge from Front Royal to Waynesboro, the long narrow preserve divides the beautiful Shenandoah Valley from the rolling Piedmont to the east. The park contains a wide array of flora and fauna as it rises from a mere 550 feet at its lowest elevation to over 4,049 feet at its highest atop Hawksbill. The park clocks in at 200,000 acres with over 500 miles of trails offering plenty of room to spread out and enjoy any type of outdoor adventure you can think up.

Located on the traditional lands of the Manahoac, Shenandoah’s mountains and valleys have long called to humans in some way or another. European colonizers arrived in the 1750s and throughout the rest of the 18th and 19th centuries, the area was farmed, logged, and mined. Some recognized the touristic value of the area, however, and conversation about building a nature reserve began in the early 20th century. Eventually, the land was seized via eminent domain (a move that displaced hundreds of families that lived there), and the park was established in 1935 built and maintained by the CCC (Civilian Conservation Corps).

When the park first opened, nearly a third of it had been cleared by logging, farming, and tree blight. Today, mature forests have grown atop of these scars and a profusion of wildlife make their homes in and beneath the canopy: black bears, bobcats, migratory birds, amphibians such as the endangered Shenandoah Salamander, and more.

Skyline Drive is a National Scenic Byway that runs 105 miles along the crest of the Blue Ridge Mountains starting in the north at Front Royal to Waynesboro where it meets the Blue Ridge Parkway. Skyline Drive is Shenandoah National Park’s linear conduit with 75 overlooks connecting travelers to all the major visitor centers, campgrounds, lodges, picnic areas, and most trailheads. Concrete posts numbered every mile keep you apprised of your whereabouts.

Fall is the most popular time to travel along Skyline Drive with its colorful foliage from late September to mid-November. But spring offers the most colorful wildflowers along the drive as well as blooming azaleas and mountain laurels.

This most northerly section winding through the park’s North District rises from the town of Front Royal. Climb to the historic Dickey Ridge Visitor Center (Milepost 4.6). Next, stop at Hogback Overlook (Milepost 20.8), the longest overlook in the park. At Mathews Arm Campground (Milepost 22.2) numerous hikes are available from your campsite. Grab some ice cream during the warm season from Elkwallow Wayside (Milepost 24.0). Don’t miss the view from Thornton Hollow Overlook (Milepost 27.6) before rolling into Thornton Gap.

The Central District from Thornton Gap to Swift Run Gap is the land of superlatives—the highest park elevation, the highest point on Skyline Drive, two lodges, two campgrounds, historic cabins, trails galore, and two visitor centers. Some would argue the best views, too.

The South District holds claim to the longest and most quiet section of Skyline Drive. It is also long on wilderness and less on developed facilities. Known for its extensive rock formations, talus slopes, and outcrops, the South District reveals the most untamed side of the park highlighted by the trails of the Big Run area.

The primary developed area is at Loft Mountain with a camp store and the largest campground in the park. Dundo Picnic Area and group camp is the only other developed facility in the South District. Overlooks are plentiful from this segment of Skyline Drive. Heading south from Swift Run Gap, you can see the geologically revealing peaks from the Rocky Mount Overlook (Milepost 71.2) where boulder fields known as talus slopes are exposed. The Loft Mountain area is found at Milepost 79.5. A side road takes you to appealing Loft Mountain Campground which also offers showers.

Shenandoah is a hiker’s paradise—trails lined with wildflowers, mushrooms, and berry bushes weave and dip through valleys and across peaks delivering full-sensory journeys through lush forests of red oak, chestnut, maple, and yellow poplar trees.

The wild and less seen side of Shenandoah awaits those who leave Skyline Drive behind and take to their feet. The rewards increase with every footfall beneath the stately oaks to rocky vista points and into deep canyons where waterfalls roar among old-growth trees spared by the logger’s axe. In other places, your footsteps lead to Shenandoah’s pioneer past. Discover both the human and natural history of Shenandoah.

Check out the staircase of cascades that run along Dark Hollow Falls Trail (1.4-mile loop), take in the views from Shenandoah’s tallest peak on the Hawksbill Loop (3-mile loop), or find Lewis Falls tucked away on the side of the mountain behind Big Meadows (3.3-mile loop).

Long-distance hikers won’t be bored here either because 101 miles of the Appalachian Trail (AT) runs through Shenandoah—follow the famous trail for maximum mileage gains and access to many shorter trails along the way. Besides the AT, perhaps the most well-known long hike is the Old Rag Circuit, a 9.4-mile loop that takes you up to the rocky peak of its namesake mountain via a steep climb and some rock scrambling; you’ll need a day pass ticket.

Skyline Driver runs 105 miles along the crest of Shenandoah’s the Blue Ridge Mountains and given the slow speed limit on Skyline Drive (35 mph) plus the 70+ scenic stop-offs it can take you hours to get from one end of the park to the other. Pick your campground strategically—you’ll want to stay relatively close to the trails you plan to hike if you don’t fancy a lengthy drive to get there.

When it comes to developed campgrounds, Mathews Arm Campground is your best bet in the north end of Shenandoah. Big Meadows and Lewis Mountain are the most centrally located campgrounds and they give you quick access to some of the most popular sites in the park like Dark Hollows Trail and the Byrd Visitor Center and camp store. Loft Mountain, the largest campground in the park is the only one south of US 33. Book your campsite several months in advance via the NPS system—things fill up quickly in peak summer and fall seasons.

The hilly campground has first come, first served and reserved sites most of which are shaded. The pull-through and deep back-in sites can handle most RVs and a tow vehicle. No electric or water hookups. Campground has potable water spigots and a dump station. The higher elevation keeps it a good 10 degrees cooler than the Shenandoah Valley below.

Big Meadows Campground is near many of the major facilities and popular hiking trails in the Park with three waterfalls and Big Meadows within walking distance. The pull-through and deep back-in sites can handle most RVs and tow vehicles. No electric or water hookups. The campground has potable water spigots and a dump station.

This is the most centrally located of all Shenandoah’s campgrounds and the smallest. The 30-site locale offers first come, first served sites only. The pull-through and deep back-in sites can handle most RVs and tow vehicles. No electric or water hookups or dump station. The campground has potable water spigots.

Loft Mountain Campground is the largest campground in the Park. The campground sits atop Big Flat Mountain with outstanding views to the east and west. Two waterfalls and numerous trails into the Big Run Wilderness area are nearby. The Appalachian Trail circles around the campground highlighting the richness of hikes nearby. The hilly campground has first come, first served, and reserved sites. The pull-through and deep back-in sites can handle most RVs and tow vehicles. Note, however, that the low canopy and trees on some turns can present challenges for taller RVs. No electric or water hookups. The campground has potable water spigots and a dump station.

Top tips for planning the perfect trip to Shenandoah

From keeping safe to packing the right clothes here’s what you need to know before you go:

How the park got its name: The name “Shenandoah” is an American Indian word meaning Daughter of the Stars.  Natives used the area for hunting and shelter. Miners and loggers used it to harvest valuable resources. Soldiers used it as a fighting ground. Shenandoah is the name of a river, mountain, valley, county, and many other things so the origin of the National Park name is unclear.

Iconic site in the park: A climb to the top of Old Rag Mountain is undoubtedly the most popular and the most difficult hike in the park. It certainly isn’t for everyone. But for those of you ready to take on the challenge, you will find yourself in the clouds. The circuit hike is about 9 miles with significant elevation change and strenuous rock scrambles. This hike takes 7-8 hours and sometimes longer depending on how many people are out there—waiting in line to pass through scrambles is par for the course. Hitting Old Rag on a weekday and/or during off-season is a much more pleasing experience. As of March 1, 2022, those wishing to hike Old Rag are required to purchase a day-use ticket.

Related article: Finding Fall Color along the Blue Ridge Parkway and Beyond

Accessible adventure: The Skyline Drive scenic byway is one of the most beautiful drives in the United States at any time of the year. The picturesque 105-mile road travels through Virginia’s Blue Ridge Mountains where 75 overlooks welcome visitors to take in panoramic views of the Shenandoah wilderness.Stops along the way bring you to trailheads where you can explore the forests, waterfalls, rocky areas, and hopefully have a wildlife sighting. It’s a pretty amazing place in terms of wildlife—there are black bears, deer, woodpeckers, owls, raccoons, skunk, fox, coyotes and wild turkeys, just to name a few of the types of animals you might run into out there.

Shenandoah is without a doubt one of the coolest leaf-peeping spots in the United States when fall foliage changes color each year.

If you drive to, say, Shenandoah National Park or the Great Smoky Mountains, you’ll get some appreciation for the scale and beauty of the outdoors. When you walk into it, then you see it in a completely different way. You discover it in a much slower, more majestic sort of way.