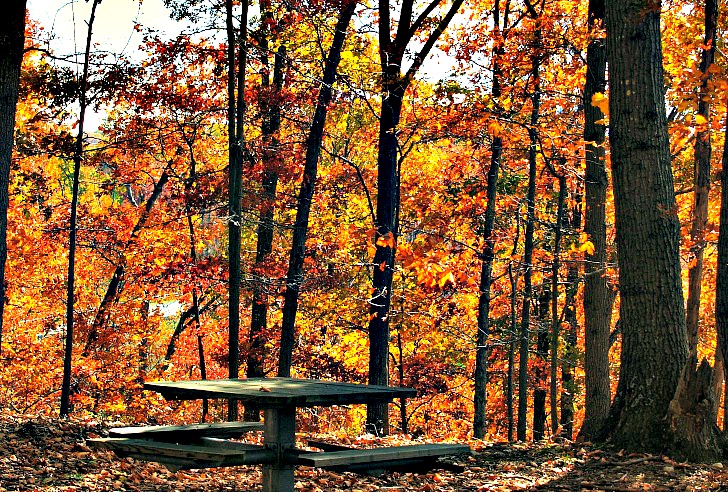 In a year that many national parks are bursting at the seams with record-setting traffic consider camping at a state park instead.

America’s 63 national parks may get all the glory and the Ken Burns documentaries but nearly three times as many people visit the country’s 10,234 state parks each year. In total, they span more than 18 million acres across the US—or roughly the size of South Carolina.

Those spaces have always been invaluable but became even more important over the past several years as visitation at the national parks has exploded. State parks have served as extensions of our backyards offering up adventures both large-scale and intimate. And, they remain alluring entry points to nature, often with fewer crowds than their better-known, big-name cousins.

For the RV traveler, many state park campgrounds offer amazing facilities often offering 50/30-amp electric and water and on occasion even sewer. On the other hand, most national park campgrounds lack these amenities and in most cases are unsuited for larger RVs.

Below you’ll find the cream of the state-park crop from hidden beaches to expansive hikers’ playgrounds. It’s time to get outside and here’s how to do it right.

Here are some of my favorite state park campgrounds.

Sprawling out across a stark expanse of 600,000 acres about an hour south of Palm Desert, California’s largest state park (and second-largest in the lower 48) is a crown jewel of America’s state park system. By day Anza-Borrego Desert has 110 miles of hiking trails to explore and 12 designated wildlife areas and by night the huge desertscape delivers some of the best stargazing in America. The park is also a site of great geological importance, as it has been found to contain over 500 types of fossils that are up to 6 million years old. If you can’t picture the prehistoric vibes on your own, 130+ giant metal animal sculptures pop up out of nowhere as you roam the park’s unforgiving terrain.

Although it’s not a household name, Dead Horse rides coattails in the best way possible: It’s situated near two of Utah’s Big Five—Arches and Canyonlands—and basically the Grand Canyon’s long-lost twin. Mountain bike the badass Intrepid Trail but the more relaxed can simply gaze open-mouthed from 2,000 feet in the air down at the deep-red rocks, glorious hues, and panoramic vistas of the Colorado River. The park gets its name from horses that died in this unforgiving landscape.

Nestled within a grove of junipers, Kayenta Campground offers a shaded respite from the surrounding desert. All 21 campsites offer lighted shade structures, picnic tables, fire rings, and 50/30/20-amp electric service. New in 2018, Wingate Campground sits atop the mesa with far-reaching views of the area’s mountain ranges and deep canyons. This campground contains 31 campsites, 20 of which have electrical hookups that support RVs while 11 are hike-in tent-only sites.  RV sites will accommodate vehicles up to 56 feet and there is a dump station at the entrance to the campground. The Wingate Campground also holds four yurts.

Located in the Tonto National Forest near the old mining town of Superior, Boyce Thompson Arboretum State Park is Arizona’s oldest and largest botanical garden. Boyce Thompson is a surprising spot for fall color, given that the high-desert garden is about 1,000 feet higher in elevation than nearby metro Phoenix.

There are no camping facilities at Boyce Thompson Arboretum State Park.

Just 15 minutes from the town of Front Royal, Virginia awaits a state park that can only be described as lovely. This park is on the South Fork of the Shenandoah River and has more than 1,600 acres along 5.2 miles of shoreline. In addition to the meandering river frontage, the park offers scenic views of Massanutten Mountain to the west and Shenandoah National Park to the east.

A large riverside picnic area, picnic shelters, trails, river access, and a car-top boat launch make this a popular destination for families, anglers, and canoeists. Ten riverfront tent campsites, a campground with water and electric sites, cabins, camping cabins, and a group campground are available. With more than 24 miles of trails, the park has plenty of options for hiking, biking, horseback riding, and adventure.

It may be South Carolina’s most visited state park but that doesn’t stop this secluded barrier island located 15 miles east of Beaufort from being one of the most picturesque destinations in the South thanks to its famous lighthouse, pristine beaches, and a popular fishing lagoon. Climb to the top of Hunting Island lighthouse to survey the palm-studded coastline. Bike the park’s trails through the maritime forest to the nature center, fish off the pier, and go birdwatching for herons, egrets, skimmers, oystercatchers, and wood storks. Camping is available at 100 campsites with water and electrical hookups, shower and restroom facilities, beach walkways, and a playground.

Seven miles of paved road wind through shady hammocks, along grassy marshes, and the shore of the Upper Myakka Lake. See wildlife up-close on a 45-minute boat tour. The Myakka Canopy Walkway provides easy access to observe life in the treetops of an oak/palm hammock. The park features three campgrounds with 90 campsites equipped with 50 amp electrical service and water; some sites also have sewer hookups.

Part state park, part forest preserve, and part privately owned land encompassing 102 towns and villages; Adirondack Park is massive. Totaling 6.1 million acres, America’s largest state park is larger than Yellowstone and Yosemite combined. Nearly half of the land is owned by the State of New York and designed as “forever wild” encompassing all of the Adirondacks’ famed 46 High Peaks as well as 3,000 lakes and 30,000 miles of river. So pack up the canoe or kayak, get ready to scale Mount Marcy, or simply meander about its 2,000 miles of hiking trails. You’re gonna be here a while.

This six-million-acre park offers thousands of campsites and hundreds of campgrounds from state-owned and operated to private campgrounds with family-friendly amenities. Camping is the perfect way to relax after hiking one of the 46 Adirondack High Peaks and preparing for the next!

Located in South Dakota’s fabled Black Hills region, the state’s first and largest state park is most famous for its photogenic herd of 1,500 wild bison that freely roam the land as well as other Wild West creatures like pronghorns, bighorn sheep, and mountain lions. The scenery is everything you think of when you close your eyes and picture the great American West laid out before you amidst 71,000 acres of vast open vistas and mountain lakes. The place is so cool that even Calvin Coolidge made it his “summer White House,” so that has to count for something, right?

Custer State Park offers nine campgrounds all with a variety of scenic sites.

Gulf State Park’s two miles of beaches greet you with plenty of white sand, surging surf, seagulls, and sea shells, but there is more than sand and surf to sink your toes into.

High desert meets the riparian zone of Oak Creek in this wonderfully serene Sedona area park. There are plenty of trails that facilitate your adventure through a colorful park experience—all you have to do is lace up your boots and start hiking. Trails near the creek show off an absolutely beautiful display as you pass under a canopy of colorful leaves, or you can hike up the Eagle’s Nest Trail to get a top-down view of the fall splendor. Get lost in the sounds and sights of an Arizona fall at Red Rock. Chances are this will be an annual destination for you to collect beautiful long-lasting memories!

Recently I ran across a few lines by Pierre de Ronsard, a 16th-century poet: “Live now, believe me wait not till tomorrow. Gather the roses of life today.” Maybe it’s time to stop dreaming about that trip you’ve always wanted to make—and just do it!