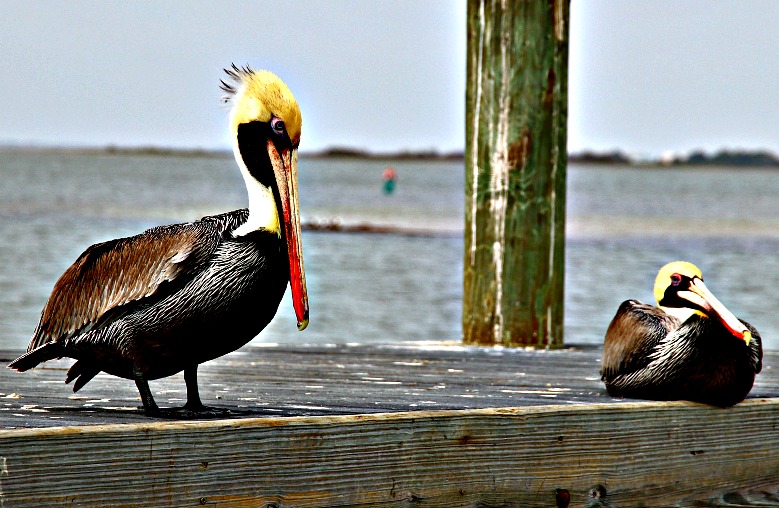 When most folks think of Texas in the summertime, visions of barbecue, Lone Star-shaped swimming pools, and the Alamo—but how about dolphins, rocket launches, and sandcastles the size of actual castles? The state’s barrier islands might surprise you.

What the keys are to Florida, the barrier islands are to Texas: a 234-mile string of islands that hug the Gulf of Mexico coast made primarily of sand built up over thousands of years from tidal movements. They range in size from four miles in length to the largest barrier island on Earth. There are seven main islands in total and each one has a distinct personality from the touristy trappings of Galveston to the utter solitude of San Jose.

No matter your summer fun, Texas’ barrier islands deliver. Want some R&R on a remote beach populated almost exclusively by seagulls? You got it. Want to go kayaking in a national park? That’s a distinct possibility. Want to eat foot-long corn dogs and “mermaid soup”? You can and you should—and rest assured no dogs or mermaids were harmed in the making of either of those delicacies. Here’s your guide to the Texas barrier islands.

The northernmost barrier island and by far the most popular with more than 7 million annual visitors, Galveston’s reputation as a summertime beach destination for Houstonians can largely be chalked up to its proximity. Although it has somewhat of a hokey reputation thanks to its Pleasure Pier boardwalk, eccentric mini golf courses, 50 colorful Kemp’s Ridley sea turtle statues around the island, and pyramid-shaped aquarium (Moody Gardens) giving it sort of an Atlantic City of the south look, Galveston has a lot going for it. As evidenced by those previously stated attractions, the 27-mile island is far and away Texas’ quirkiest barrier island teeming with historic architecture, and larger-than-life nautical lore. After all, a city with lofty nicknames like Playground of the South and Ellis Island of the West is bound to at least be intriguing.

A hard-to-miss attraction, the Galveston Island Historic Pleasure Pier is a mammoth boardwalk lined with carnival games and enough rides to fill a theme park including the Iron Shark Rollercoaster and the Pirate’s Plunge flume ride.

For something a bit more subdued, The Grand 1894 Opera House is an ornate institution, home to popular productions like Charles Dickens’s A Christmas Carol. The theater harkens to the island’s earliest days when Galveston first emerged as a primary shipping and immigration port in the 1800s.

Nearby is The Strand, Galveston’s historic, bayside district filled with Victorian and Greek Revival architecture. You’ll also find the tall ship Elissa, an 1877 vessel that now serves as a floating museum of maritime history.

Further south on the island, Jamaica Beach offers a quieter reprieve from the touristy clamor for those looking to soak up the sun.

Driving south from Jamaica Beach—and the antithesis of Galveston in terms of hustle and bustle—Follet’s Island is a smaller, 13-mile island that’s largely untouched and undeveloped except for some remote beach houses.

The entire island is one big beach, most of which is quiet and wide-open, providing ample opportunity for swimming, beach camping, fishing, and kayaking. Seeing as the beach is largely undeveloped and open, it’s entirely free to visit and horseback riding is also allowed on the beach.

If you thought Follet’s Island was quiet, just wait until you see what’s next. Further south, Matagorda Island is the most remote barrier island, a 38-mile stretch of solitude only accessible by boat. A far cry from the thrill rides of Galveston, Matagorda is largely comprised of the Matagorda Island National Wildlife Refuge and State Natural Area.

For visitors who have a private boat or can charter one the car-free island is a beachy escape for campers willing to forgo the niceties of electricity and running water. This is an undeveloped place preserved for bird watching, saltwater fishing, and hunting. The 20,000 acres of land are open to deer and waterfowl just as long as you keep in mind that the whooping cranes which occasionally flock to the area are endangered and protected.

At night, thanks to its remoteness and lack of light pollution, stargazing is a popular pastime too.

Equally, as undeveloped as Matagorda yet easier to access, San Jose Island is the next barrier island down the line. It’s immediately north of populated Port Aransas on Mustang Island where a ferry takes visitors back and forth offering 21 miles of undeveloped beachfront, excellent fishing, and endless beach combing for seashells. Cars are also prohibited in San Jose which is entirely protected as a wildlife sanctuary. Due to the island’s history as a former ranch, wild cattle roam the island and it’s not uncommon to see their offspring on the beach.

As quiet and untouched as the island seems today, it’s rich with Texas history. This was the first site to fly the American flag on Texas soil when a lieutenant swam ashore from the USS Alabama and planted it in the sand in 1845. A short-lived town on the island called Aransas was razed by Union forces in the Civil War. In 1935, wealthy oil magnate Sid Richardson established a miles-long ranch and estate where he once wined and dined with the likes of President Franklin D. Roosevelt. The estate is long gone but riches may or may not remain—legend has it the island contains actual buried treasure from pirate Jean Lafitte.

While San Jose offers remote solitude and potential pirate riches, the island on the other side of Aransas Pass is a haven of seafood restaurants, margaritas, beachside festivals, and Easter egg-colored cottages. Mustang Island is a mecca for families, wintering snowbirds, and spring breakers alike, especially in the city of Port Aransas which comprises much of the 18-mile island.

The pirate Jean Lafitte used to frequent the island, arguably making him the original snowbird or spring breaker (take your choice). And while you likely won’t find buried treasure here, you’re sure to find treasures of other kinds including award-winning sand sculptures, adrenaline-pumping jet ski jaunts, and all the shrimp and redfish you can eat.

For a town with a year-round population of about 3,000, Port Aransas is surprisingly happening and delightfully quirky. For instance, Texas SandFest is an annual springtime attraction (April 15-16, 2023) that features carnival-style snacks, live music, and epic sand sculptures right on the beach. It’s an ideal place to scarf foot-long corn dogs and funnel cakes while marveling at giant sand castles.

Just about every place on the island offers top-tier fish and seafood, perhaps best exemplified by Isabella’s. The beachy-chic restaurant sits in a classy community called Cinnamon Shore (named for the fact that Port Aransas’ beaches look like they’re swirled with cinnamon). There you can pair espresso martinis with cheesy baked oysters, pancetta-wrapped shrimp, and something called Mermaid Soup: a curried medley of lobster-coconut broth and shrimp—and mercifully, no mermaids.

To fully immerse yourself in the action-packed island, though, you need to get out on the water, and by that we mean go on a guided jet ski romp. Gettin’ Salty Watersports takes visitors out into the bay and to a couple seashell-strewn islands with lots of thrilling dolphin sightings along the way.

The next island is not only the largest in Texas but also the largest barrier island in the world. Clocking in at 113 miles, Padre Island is bookended by Corpus Christi and Padre Island National Seashore on the north and beach bars and theme park ride on the south. Naturally, an island larger than the state of Delaware is bound to have a wide array of attractions and Padre Island is the kind of something-for-everyone that runs the gamut from urban outings to all-natural tranquility and nature preserves.

Divvied into North Padre Island and South Padre Island, separated by the Port Mansfield Channel, the top half starts with Corpus Christi, the most populated area in the region. From the Selena Museum and the Texas State Aquarium to beachside breweries and guided tours aboard the USS Lexington, there’s no shortage of sights to enjoy.

North Padre is also home to a national park site, Padre Island National Seashore, the longest stretch of an undeveloped barrier island in the world and proof that the “everything’s bigger in Texas” slogan isn’t always a cliche. The 66-mile park protects sea turtles and hundreds of bird species and it’s an ideal haven for fishing, kayaking, windsurfing, and RV camping on the sand.

On the southern side of the channel, South Padre is known equally as a family-friendly getaway and a spring break staple. It’s swarming with beach bars (including Clayton’s, the largest beach bar in Texas, live music, carnival rides, an enormous water park (Beach Park at Isla Blanca), and Gravity Park, an adventure and amusement park with some seriously intense attractions including the Tallest Reverse-Bungee in the World (The Rocket).

A slender thread of land between the shallow Laguna Madre and the rolling Gulf of Mexico, South Padre Island anchors the World Birding Center with nature adventures in every season.

Dune meadows, salt marsh, and intertidal flats along with thickets of native shrubs and trees are irresistible to migrating birds.

Of course, with this much mileage of coastline, there are plenty of beaches to choose from, too, like Isla Blanca Park and South Padre Bayside Beach.

The last barrier island is also the teeniest. Brazos Island is a diminutive four-mile island, home to 217 undeveloped acres of seaside wilderness. Located just north of the mouth of the Rio Grande, it’s a peaceful retreat for swimming, fishing, bird watching, hopeful dolphin-spotting, and camping.

Aside from that, the main draw here nowadays is Elon Musk’s SpaceX launch facility which set up shop on the Boca Chita peninsula.