At over 52,000 acres in size, Mesa Verde preserves more than 4,300 archeological sites and over 600 cliff dwellings 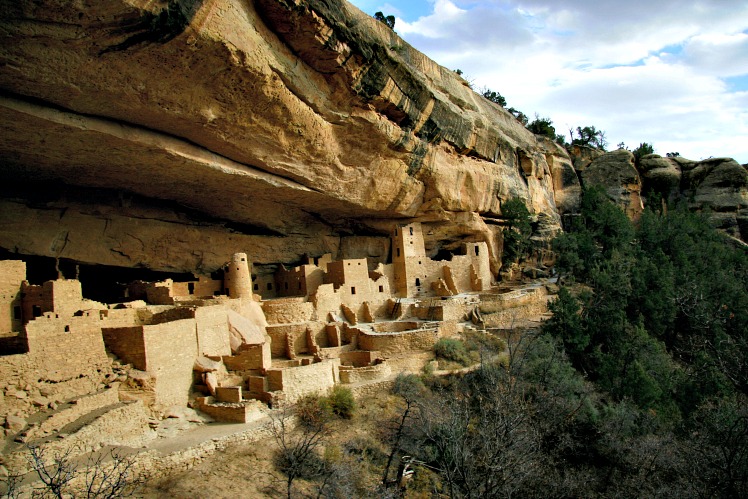 During our stay at Farmington, New Mexico, we did day trips to Aztec National Monument and Mesa Verde National Park in the southern portion of Colorado.

We had high expectations for the first visit to Mesa Verde National Park, which was far exceeded. Mesa Verde in Spanish means green table, a high, broad Mesa averaging about 18 inches of precipitation each year between winter and spring snows and summer thunderstorms. Ancestral Puebloan peoples had discovered it hundreds of years before European explorers visited the area.

There are 63 national parks in the United States and Mesa Verde in southwest Colorado is the only one that was created to safeguard the history of a people and a cultural resource. When Teddy Roosevelt signed the bill into law establishing Mesa Verde as a national park in 1906, his remarks were clear: the park would ‘preserve the works of man.’ The works he was referring to were, most notably, ancient villages built upon sandstone ledges on cliffs perched 2,000 feet above the Montezuma Valley.

Mesa Verde is Spanish for “green table”—named for the pinyon pine and juniper forests that blanket the ceiling of the Navajo Canyon—where nearly 5,000 archeological sites and 600 cliff dwellings built by the ancestral Puebloan people between 550-1300 A.D. remain today.

The sophistication of the dwellings is notable as only sticks, stones, and bones were used to create all of the sites; the tools evolved to advance the architectural methods of the day. Some of the sites are small, containing one-room units found atop the high surfaces of the canyon walls (the green table) and others are multi-story palaces (some with up to 200 rooms) found nestled in the steep rock faces somewhere between the mesa and the canyon floor.

The location of the dwellings was strategically chosen and served multi-functional purposes—positioned far enough from the flat-top above that they protected from invading groups while enclosed enough that they maintained solar warmth and energy within the enclosures. To navigate between the mesa, the dwellings, and the canyon floors, the ancestral Puebloans would climb (they are arguably among the first free-climbers in North America) while also making use of hand-made ladders that allowed them to travel to and fro. The structures were also used for ceremonial purposes.

The end of an era…

For seven centuries, the ancestral Puebloans thrived until they abandoned their homes around 1300 A.D. Archeologists have multiple theories as to why they left the area, the most likely determination being that drought wiped out their crops while impending war with invaders subsequently drove them south to the area that now belongs to the state of New Mexico. Another contributing factor to their departure was possible because they over-hunted and overused natural resources in the area.

Whatever the reasons for their complete departure, by 1300 the natives had moved on from their dwellings, never to return. After that, what was once a bustling community and home to tens of thousands of people fell into silence where their homes remained undiscovered for nearly 600 years.

One of the coolest aspects of Mesa Verde is the sheer volume of cliff dwellings that are preserved inside the park. There are also thousands of archeological sites on record and there are certainly more that are yet to be found. For this reason, Mesa Verde is one of the most highly restricted parks in the entire system (walking off of established trails is entirely prohibited.) The beauty of such restriction is two-fold: 1.) you are blessed with the knowledge of impassioned rangers who seem to know everything about the past, present, and near-future of the park; and 2.) you know that this lone cultural resource is being fiercely protected—as we want all of the parks to be!

The archeological sites can be found on two mesas: Chapin and Wetherill Mesas are separated by the Navajo Canyon where dwellings line the walls. Access to the best-known dwellings is by ranger-led tours where visitors enter the ruins by ascending and descending ladders and stone-made steps. Some of the most popular guided tours include the Balcony House, Long House, and of course, the Cliff Palace. To go to any of them you will want to get tickets at the Mesa Verde Visitor and Research Center in advance. The Spruce Tree and Step Houses can be explored freely.

Other cool areas include the Far View Sites Complex where visitors can wander among archeological sites to survey well-preserved kivas and their inner workings and catch a glimpse of a petroglyph of a sundial.

Spend a night or two in Morefield Campground just four miles from the park entrance. With 267 sites there’s always plenty of space and the campground rarely fills. Each site has a table, bench, and grill. Camping is open to tents, trailers, and RVs including 15 full-hookup RV sites.

The campsites are located within a high grassy canyon filled with Gambel oak, native flowers, deer, and wild turkeys. A camp store offers registration, food, and camp supplies. Firewood, gasoline, showers, a coin-operated laundromat, and a kennel are located nearby.

How the park got its name: Mesa Verde is Spanish for the green table which refers to the green blanket of vegetation, pinyon, and juniper that lies across the top of the Navajo Canyon. The name was given by Spanish explorers.

Iconic site in the park: The best-known cliff dwelling in the park is Cliff Palace, the largest of all of the dwellings and the crown jewel of the national park. The first stone was mortared in 1200 A.D. and over 20 years the settlement would grow to include 150 rooms and 23 kivas that would house an estimated 100 people until the site was abandoned in 1300 A.D. Among the most celebrated structures in the palace is the 26-foot Square Tower House, the tallest internal structure found in any of the dwellings at Mesa Verde. The natural sandstone that the village was carved out of is believed to have once been painted in bright colors.

On the 30-minute ranger-assisted tour, you will descend uneven stone steps and climb four ladders with an elevation change of 100 feet. The total walking distance is ¼ mile.

Accessible adventure: There are two different auto tours in the park that follow roads along mesas on either side of the Navajo Canyon. The most popular of the two is the 6-mile route on Mesa Top Loop Road which offers stops at accessible sites throughout where you can join park-led tours and step onto overlooks that peer onto ancient villages of the ancestral Puebloan people (including the Sun Point Overlook from where you can see Cliff Palace in a distance.)

The 12-mile Wetherill Mesa Road on the other side of the canyon is a wild ride bringing visitors from Far View to many scenic views that overlook four states. Wetherill is open only from May through October and vehicle size and weight restrictions are in effect on both park roads so check National Park Service access areas on the official website to get more info before heading out.

Both roads have steep grades, and sharp turns, and offer great opportunities to see wildlife. Approximately 40 cliff dwellings can be seen from national park roads and overlooks.

Big adventure: The ranger-led Balcony House tour brings visitors through a variety of strenuous sections—down a 32-foot ladder, through a 12-foot tunnel on hands-and-knees, and on a crawl up a 60-foot open rock scramble before exiting a 10-foot ladder climb. The tour is only one hour long but it is the most adventurous dwelling tour available and allows visitors to explore kivas and plazas in one of the best-preserved sites in the park while breaking a sweat at the same time.

Mesa Verde has the largest collection of ancestral Puebloan artifacts ever found—there are more than 5,000 archaeological sites and over 600 cliff dwellings documented in the park.

Kiva is Hopi for “room underneath,” adapted by anthropologists and archeologists to refer to ceremonial rooms. They are found throughout Mesa Verde. Kivas are well engineered with ventilation systems to bring fresh air into the structures where ceremonial fires once burned in the center—also in the center is a small hole called a sipapu which represents an opening to the otherworld. Some kivas have underground passageways leading to other areas in the settlements.

Hopi Indians in Arizona and New Mexico are descendants of the Mesa Verde Ancestral Pueblo peoples.

There is more to this park than archeological sites and dwellings. Forested areas are made up of Utah juniper, pinyon pine, and scrub oak and provide a healthy habitat for a variety of wildlife species including deer, elk, bobcat, mountain lion, skunk, and badger, and the birdlife in Mesa Verde is teeming (more than 200 species have been documented in the park.)

The falling snowflakes sprinkling the piñons gave it a special kind of solemnity. It was more like sculpture than anything else … preserved … like a fly in amber.