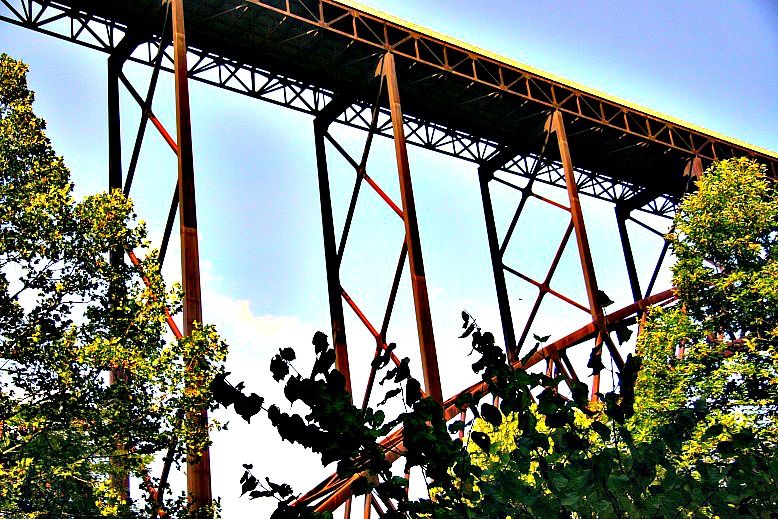 Every year on the 3rd Saturday of October (October 15, 2022), an official “Bridge Day” is held and the span is completely closed to vehicles. Nearly 200,000 people are then allowed to walk on the bridge for a one-day festival that is centered around the spectacular view of the New River and BASE jumping. Vehicular traffic on the Bridge is closed from 7 am until approximately 5 pm.

When you walk out onto The New River Gorge Bridge during Bridge Day, you’ll be standing over one of the oldest river gorges on Earth. By most accounts, the New River Gorge is about 345 million years old. That makes it the top contender for being the first river in North America.

876 feet. That’s the amount of vertical space that exists between The New River Gorge Bridge and the water.

The New River Gorge averages between 700 and 1300 feet deep. The gorge was formed solely due to erosion—there were no glaciers in the area like those that carved our similar gorges in other parts of the world. This part of the gorge is characterized by steep walls, huge boulders, and an exposed cliff band along the gorge’s rim.

The river itself is steep for its size. In the 85 miles of New River in West Virginia, the river drops a total of 850 feet. Most of that gradient is concentrated right in the gorge. It’s the drop in elevation that makes for the New River’s outstanding whitewater.

One very unique feature of the river is its course. The new river flows north (which is not in itself unusual) and bisects the entire Appalachian mountain range separating north from south.

It is also a walk that is special for yet another reason. The Bridge you are walking on is 876 feet above the rapids of the New River. That may not seem very tall since you just walked 3,030 feet across the Bridge but consider this fact. We could move the Washington Monument underneath the New River Gorge Bridge and still have 325 feet left of space between the two.

This makes the New River Gorge Bridge a perfect location for the BASE jumpers and rappellers that take advantage of the Bridge Day festivities.

The BASE stands for Building, Antenna, Span, and Earth. BASE jumpers leap from any of these four fixed objects with parachutes designed specifically for rapid deployment. Known around the world as the most extreme of extreme sports, BASE jumpers look forward to Bridge Day every year.

You can also just hang out and look at it, if that’s more your speed.

The New River Gorge is a lot of things. Wilderness. Park. Vacation. Home. It has a special meaning for everyone who visits. And they have Bridge Day to celebrate all of them.

This is the only day of the year that traffic is shut down and spectators can safely and legally walk across the world’s second longest single arch bridge.

Hosted by the Fayette County Chamber of Commerce, the annual festival features food, vendors, and activities like BASE jumping, rappelling, and the High Line—a 700-foot ride down a rope from the bridge’s catwalk down to State Route 82. Courage (not experience) and early registration are the only requirements to ride the High Line.

Time is on your side—at least for six hours! Enjoy the view from the best overlook in the New River Gorge. Enjoy browsing through hundreds of vendor booths to find just the right souvenir for the day. Feeling Brave? Check out Bridge BASE Jumping or Rappel and Highline Information.

What is Bridge Day?

Bridge Day is West Virginia’s largest single-day festival and one of the largest extreme sports events in the world. Held annually every third Saturday in October on the New River Gorge Bridge in Fayette County, West Virginia, this is the only day each year thousands of spectators can walk across the bridge and watch as serious BASE jumpers get their chance to fly 876 feet into the Gorge below and rappellers ascend and descend from the catwalk.

Kick off your Bridge Day weekend with Taste of Bridge Day on Friday, October 14.

Experience the High Line At Bridge Walk on October 14-16.

8:30 am: Shuttles begin at designated lots

9:00 am: Into The Gorge bus rides start (pre-sold tickets only)

Evening events happening at Adventures On The Gorge, River Expeditions, Ace Adventure Resort, and The Outpost at New River Gorge

Related article: The Wild, Wonderful Waters of New River Gorge! Round Out Your Trip with a Visit to Babcock State Park & Glade Creek Grist Mill!

New River Gorge National River is accessible by US-19 and Interstates 64 and 77 in south central West Virginia.