How to plan a fall adventure to Blue Ridge Parkway 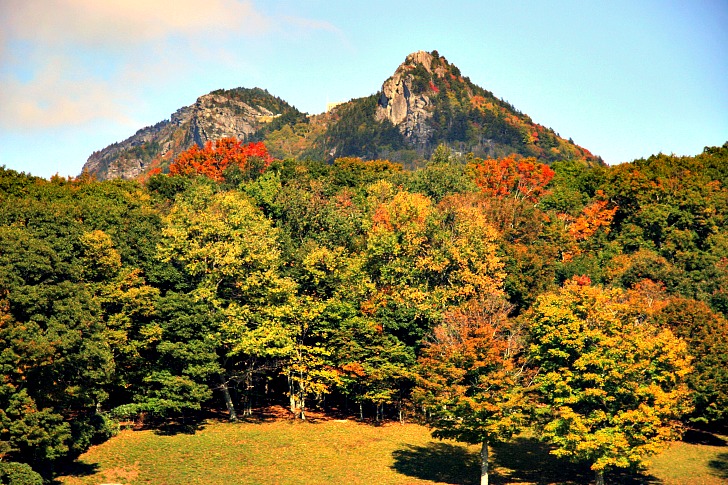 Tracing the spine of the southern Appalachian Mountains from Virginia’s Shenandoah National Park to the eastern edge of the Great Smoky Mountains National Park in Western North Carolina, the Blue Ridge Parkway is an epic East Coast road trip.

The first motorway in the country designed purely for recreational purposes, the parkway weaves through six different mountain ranges and four massive national forests first following the crest of the Blue Ridge Mountains and then snaking through the Black Mountains, the Great Craggy Mountains, the Pisgahs, and the Balsam Mountains before arriving at the edge of Great Smoky Mountains.

Stringing together some of the wildest spaces in the East, the 469-mile motorway also showcases some of the most spectacular fall colors in the country as the richly biodiverse forests of the southern Appalachian Mountains blush with autumn color.

How to catch peak fall color

In terms of flora and fauna, the southern Appalachian Mountains are incredibly rich. More than 100 different species of trees can be found in the forested peaks flanking the parkway meaning the fall colors are guaranteed to be spectacular. The seasonal transition typically begins in October but several factors can delay or extend the autumn display. And with elevations topping out above 6,000 feet along the Blue Ridge Parkway seasonal color varies by location with the transition beginning at higher elevations and spreading downslope.

Related article: Finding Fall Color along the Blue Ridge Parkway and Beyond

For road-trippers, the parkway has eight developed campgrounds offering both tent sites and RV sites with fire rings and picnic tables. For campers, amenities include potable water and bathroom facilities at the Julian Price Campground and the Mount Pisgah Campground also offers hot showers. All eight of the parkway’s campgrounds are open seasonally from early May through the end of October. For backpackers, there are also three hike-in backcountry campgrounds scattered along the Blue Ridge Parkway—Rock Castle Gorge, Basin Cove, and Johns River Road.

There are also two year-round lodges situated along the Blue Ridge Parkway. In Virginia, the Peaks of Otter Lodge is situated along the parkway in southwest Virginia (MP 86). Named for the trio of peaks overlooking the town of Bedford all of the lodge’s rooms have views of Abbott Lake and Sharp Top (and dog-friendly rooms are available, too). The lakeside lodge also offers an attached restaurant and bar along with a gift shop stocked with trail snacks, guidebooks, and locally sourced artisanal products.

In North Carolina, the Pisgah Inn (MP 408) is open from the beginning of April through the end of October. Perched on the flanks of Mount Pisgah at an elevation of 5,000 feet the alpine inn presides over the massive Pisgah National Forest. To help guests savor the sweeping vista each room features attached porches complete with lounge-worthy rocking chairs. The inn also offers a formal dining room (open to the public for lunch) and a café with easy-to-grab meals and snacks.

For late fall and winter travelers, the parkway also provides access to a handful of state parks with year-round accommodation options. In Virginia, just west of Buena Vista, Douthat State Park has cabins for rent and a campground open year-round along with more than 40 miles of hiking trails. Further south in North Carolina, the campground at Stone Mountain State Park is open year-round and offers sites for both tents and RVs. And for hardy backpackers, North Carolina’s Grandfather Mountain State Park has 13 hike-in backcountry campsites.

For hikers, the Blue Ridge Parkway provides access to more than 360 miles of trails offering everything from leisurely nature walks to lengthy rambles through parcels of roadless wilderness. And for leaf-peepers, there are several superb foliage hikes. In Virginia, the 2,193-mile Appalachian Trail traces the path of the parkway for just over 100 miles beginning at Rockfish Gap (MP 0). In North Carolina, the state’s 1,175-mile Mountains-to-Sea Trail also crisscrosses the parkway between the Folk Art Center (MP 382) and Mount Pisgah (MP 408).

At the northern end of the parkway in Virginia, Humpback Rocks (MP 5.8) is among the scenic highlights. Perched at 3,080 feet, the craggy outcrop presides over the northern section of the parkway providing expansive views encompassing the Rockfish and Shenandoah Valleys to the west and the pastoral Virginia Piedmont to the east—although the mile climb to the craggy pinnacle includes 700 feet of elevation gain.

Further south, the three-mile out-and-back hike to the 3,875-foot summit of Sharp Top (MP 85.9) serves up 360-degree views of the Peaks of Otter portion of the parkway with the Shenandoah Valley to the east and the Allegheny Mountains silhouetted against the horizon to the west.

In North Carolina, Mount Pisgah is supremely positioned for fall foliage views. After the 1.3-mile climb to Mount Pisgah’s 5,721-foot summit, hikers are rewarded with an eyeful of the Black Mountains to the north and the rugged Shining Rock Wilderness to the west.

Fall is also an ideal time to spot wildlife along the parkway. Along the southern portion of the Blue Ridge Parkway in North Carolina resident, elk are particularly active. Once prevalent throughout the Appalachian Mountains elk disappeared from the southeastern United States in the mid-1800s after populations dwindled due to overhunting and loss of habitat.

Elk were reintroduced to the Great Smoky Mountains National Park between 2001 and 2002 and now the brawny ungulates roam the southernmost section of the parkway in Western North Carolina typically gathering in the Cataloochee Valley. And during the fall, the region’s resident elk begin their mating season also called the rut with males bugling, sparring, and strutting ostentatiously to attract females.

Black bears are also active along the parkway during the fall. While the bruins do hunker down for portions of the winter in the Southeast they don’t entirely hibernate and if seasonal temperatures are mild the black bears will remain active year-round. However, fall is a strategic time to spot the opportunistic eaters gorging on calorie-dense nuts and berries along the parkway in preparation for the leaner days of winter.

Autumn is also a spectacular time for birders along the Blue Ridge Parkway. From early September through the end of November the lofty ridgelines of the southern Appalachian Mountains become a superhighway for birds migrating south to warmer climes for the winter especially birds of prey including a diversity of hawks, eagles, kestrels, and falcons.

Related article: 10 Most Beautiful Places to See Fall Foliage in 2022

There are a number of hawk-watching spots scattered along the Blue Ridge Parkway designated by the Hawk Migration Association of America including Rockfish Gap (milepost 0) and Harvey’s Knob (MP 95.3) in Virginia and Grandfather Mountain (MP 305) in North Carolina.

I loved autumn, the one season of the year that God seemed to have put there just for the beauty of it.