Experience the island’s unique history, natural beauty, and wildlife during special events throughout the year 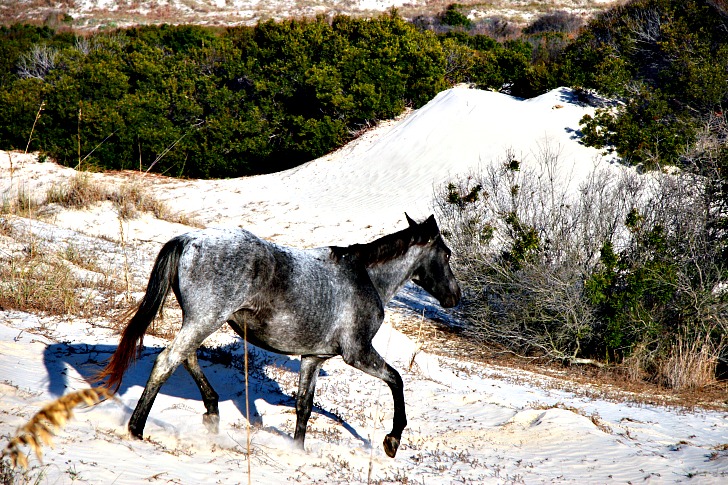 There is only one place on Earth where you can find wild horses, secluded white beaches, live oaks draped in Spanish moss, and the skeletal remains of a once-famous mansion. Cumberland is one of the largest undeveloped barrier islands along the Georgia coast. The National Park Service protects almost 36,000 acres of the island including miles of unspoiled beaches.

The Cumberland Island National Seashore, the southernmost and largest barrier island on the Georgia coast is just that place and this year marks the 50th anniversary of the congressional move that saved it from commercial development.

Starting in October, Cumberland Island kicks off a year-long series of events including special programs, a speaker series, and even a parade. While special events such as the Cumberland Island-themed St. Marys Seafood Festival in October are exciting enough to entice a crowd the island’s history, beauty, and wildlife are unmatched experiences no visitor should miss at any time of year.

Although inhabitants of Georgia’s coast can be traced back thousands of years starting with a Timucuan tribe a more concrete history begins with 16th-century Spanish missions and James Oglethorpe’s 17th-century British forts. Oglethorpe also named a hunting lodge Dungeness in honor of a beloved landmark in England. The Dungeness name and remnants of the properties associated with the land remain to this day.

After the American Revolution, the island attracted prominent families with famous pedigrees such as General Nathaniel Greene, George Washington’s most trusted officer. He and his wife borrowed the Dungeness name and began construction on a four-story mansion that would undergo several alterations over the next century. Dungeness lands then fell into the hands of Robert Stafford who purchased most of Greene’s property at auction. He built his sprawling mansion and plantation of more than 1,300 acres.

The Civil War brought more change to the island as formerly enslaved people, locals, and others trying to navigate Reconstruction all attempted to carve out a living and a life here. Near the turn of the 20th-century members of the renowned Carnegie, family made their way to the island, purchased 90 percent of the land, and built a Scottish castle aptly named Dungeness.

Visit the ruins of a mansion that was once called Dungeness. First built in 1884, the Dungeness Mansion was intended as a winter home for Thomas Carnegie (younger brother and business partner of Andrew Carnegie), his wife Lucy, and their nine children. Though Thomas passed away soon after construction, Lucy Carnegie went on to spend more and more time and resources on the island estate.

Several additions and remodels were made over the next thirty years. By the time Lucy passed in 1916 the mansion had grown to approximately 35,000 square feet. The mansion caught fire in 1959 and only the brick and stone walls remain.

Though the mansion is in ruins it remains one of the most picturesque and visited spots on the island. Visitors can walk the grounds around the house and the numerous support buildings that were part of operating the estate.

There simply isn’t one way to describe the scenery on Cumberland Island; it offers a variety of breathtaking landscapes and backdrops. Take a few photographs on the island and you can easily convince someone that you have visited multiple countries and traveled many miles.

The quiet beaches bring peace and splendor together particularly in the evening when the soft lull of the waves blends into the pastel-colored sky. Walk in any other direction and you’ll run into a different kind of majesties such as salt marshes full of fiddler crabs, shrimp, and alligators.

Rivers and sounds traverse through it all so that every turn is a new adventure. Point a camera anywhere and capture untouched nature in all its colorful brilliance. If you need shade, spend some time under the live oaks and let the trees serve as nature’s canopy to protect you from the elements.

Though the grandeur of nature is significant on Cumberland Island so is the architecture. Of the three dozen homes here almost all are still owned and cared for by the same families who built them. There is an affection for ensuring the dwellings capture some aspect of the scenery and many of the homes themselves are works of art.

Cumberland Island is home to 17 miles of uninterrupted beach. No docks, houses, or other structures interrupt its serene beauty. The island boasts a healthy expanse of vegetated dunes that make it one of the most important nesting spots for loggerhead sea turtles in all of Georgia and a sanctuary for migrating shore birds.

Swimming is very popular but caution should be exercised. It is the open ocean and all the tides, currents, and animals that call it home exist. There are no lifeguards. There are designated crossings marked on the map providing access to the beach. These will either be trails or boardwalks. If a boardwalk exists, please use it to help protect the dunes. Crossings on the beach side are marked with a black and white striped pole along the dune line.

Related article: The 8 Best Things to Do this Fall in Georgia

Imagine a world where a wild horse gallops freely in the distance and you are so distracted that you almost don’t even notice a turkey scurrying across your path. On the other hand picture, yourself stepping onto a beach just in time to watch brown pelicans diving into the ocean for breakfast.

Maybe you even catch a glimpse of the endangered loggerhead sea turtles struggling to make it to sea or you tread quietly while you observe deer challenging feral hogs for foliage. Cumberland Island is a playground for all of these animals and countless others who make their home here. Whether it’s woodpeckers, owls or even armadillos the importance of preserving all wildlife and their habitat is paramount throughout Cumberland Island.

As the Gateway to Cumberland Island and the Georgia Coast, St. Marys offers a laid-back vibe with Southern charm for a perfect relaxing retreat or an outdoor adventure. Attractions include the downtown historic district, the St. Marys Submarine Museum, and St. Marys Waterfront Park. You can visit the Cumberland Island National Seashore Museum and the Cumberland Island Visitors Center. You’ll enjoy water sports and cycling plus shopping and dining at locally owned spots.

Celebrate the 50th anniversary of Cumberland Island at the St. Marys Seafood Festival on October 15 featuring vendors, food trucks, races, and an island-themed parade. Cumberland Island’s park superintendent is the grand marshal and the National Park Service will offer informative and kid-friendly activities such as colonial encampments, a highland pipe and drum band, musket firing, and a special 50th-anniversaryth anniversary program.