Head to the state’s storied towns for autumn nights filled with eerie tales and ghostly apparitions. Plan your trip to the most haunted places here. 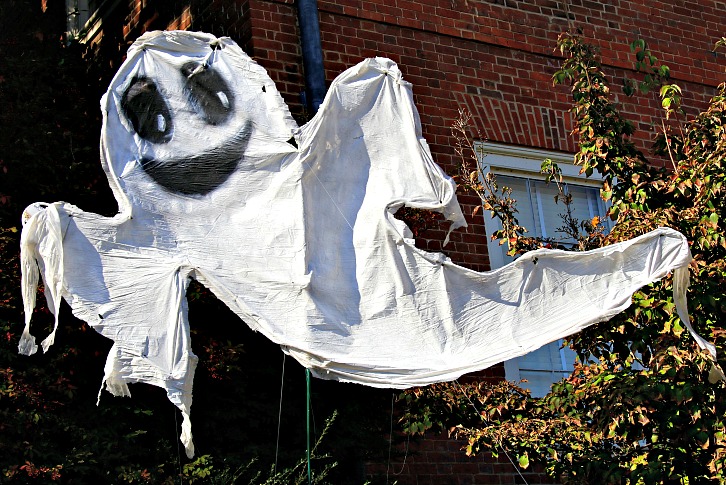 Wait…did you hear something? That creak? That rattle? That ghastly groan?!
In Arizona, you’ll find plenty of creepy noises—not to mention hauntings and paranormal activities—guaranteed to give you goosebumps.

Travel the state north to south to uncover everything from haunted hotels to ghost walks and ghost towns. Then see if you can still sleep with the lights off.

Today, Jerome is known more for its liquid spirits, in particular, its award-winning wine; however, it remains one of Arizona’s most famous ghost towns and hauntings come with the territory. After all, it didn’t earn its reputation as the “Wickedest Town in the West” without reason.

During the annual October Jerome Ghost Walk, you can wander the narrow passageways and steep streets to find costumed performers reenacting the shootings, mysteries, and love triangles that marked this former mining town.
Can’t make it? Book a night at the Jerome Grand Hotel. Originally opened as the town’s hospital in 1927, the 25-room hotel has had reports of strange occurrences and occasional sightings including those of a bearded miner and a specter since dubbed “Claude” who met his demise in the elevator shaft.

Want dinner and drinks with more of the Jerome ghost town flavor? Enjoy a meal at the Haunted Hamburger followed by a nightcap and live music at the Spirit Room, a favorite watering hole where all the spirits are friendly.

Daytime delight: Steel your nerves for a night in a haunted hotel with an afternoon wine tasting at Caduceus Cellars where the pours all come from Arizona. Stop in earlier when the tasting room operates as a cafe for Italian espresso and lattes.

Ghosts talk as you walk in Prescott while you learn about this town’s ghoulish past. Before Phoenix, Prescott reigned as the capital of Arizona (more specifically, the Territorial Capital) and it still retains much of its New World meets Old West charm as evident in its Victorian architecture and Whiskey Row saloons.

The Palace saloon—often said to be Arizona’s oldest bar—is one such Whiskey Row establishment and Prescott’s most haunted spot. Multiple ghosts have been spotted here including one Frank Nevin who lost his business in a poker game and still haunts the bar and maybe hoping for a chance at a better hand. The Palace’s basement briefly even served as a temporary jail and those who have visited have reported feeling a “heavy presence” making it difficult to breathe.

During A Haunting Experience, a weekend walking tour of historic downtown Prescott, you’re likely to visit The Palace while you explore the town’s spiritual side. The Trost & Trost-designed Hassayampa Inn is another. Here, it’s said a young bride—abandoned by her husband on their honeymoon in 1928—hanged herself from her balcony room. Perhaps she remains, waiting for his return.

Daytime delight: Just four miles from town, Watson Lake is a serene landscape that beckons hikers, kayakers, and rock climbers. Or fill up on the town’s history before hunting its ghostly residents at the Sharlot Hall Museum housed in the former Governor’s Mansion.

Halloween is one roving street party in eccentric, artsy Bisbee. Throw on a costume and you’ll fit right into this southern Arizona town, once a copper mining center. (You’d probably be the other 364 days of the year, too, if we’re being honest.)

Related article: A Haunting Good Time: Your Guide to 5 Ghostly Cities Across America

Not sure where to start your ghostly hunt? Acquaint yourself with Bisbee’s past as a mining boomtown with a stop at Queen Mine Tours. You’ll head deep underground into the former Copper Queen Mine with former miners as they navigate the abandoned equipment and explain how turn-of-the-century mines operated. This is one tour best avoided by anyone with claustrophobia.

In the evening, join one of Old Bisbee Ghost Tour’s numerous offerings including a walking tour of haunted spots and a haunted pub crawl during which “spirits” are guaranteed. Along with your share of ghosts, you’ll hear tales from Bisbee’s wild history and learn why so many of its former residents still haunt this mountain town.

After all the walking, spend the night at a Bisbee haunted hotel such as the landmark 1902 Copper Queen Hotel. Guests and ghost hunters often try to prowl the upper floors in search of the hotel’s resident spirits—a tall caped gentleman, an ethereal dancing woman, and a young giggling boy.

Among the stories guests on the one-hour Tombstone Ghost & Murder, Tour will hear is that of 1888 ill-fated lovers George Daves and Petra Edmunds. One night, Daves spied Edmunds walking down Third Street with another guy. He shot at her and thinking he had killed her fatally shot himself (Edmunds survived). In death, Daves’s ghost is said to hang out on Third Street perhaps hoping for a reunion. Traveling aboard the original Tombstone Trolley Car, this tour shows there’s a lot more to Tombstone than the 1881 shootout at the O.K. Corral.

Ghost City Tours offers two options in Tombstone: one for all ages and another just for adults. The Bullets and Bordellos Ghost Tour delves into Tombstone’s seedier past with tales of murder, suicide, and its infamous “houses of ill repute.”

Related article: 5 Haunted Places around America Perfect for a Halloween Road Trip (If You Dare)

Daytime delight: The two-story Cochise County Courthouse designed in the Victorian style was constructed of red brick in 1882. The courthouse, a splendid example of territorial architecture, continued to serve as a county facility until 1931 when the county seat was moved to Bisbee. Today, visitors can enjoy a museum full of authentic interpretive exhibits on the history of Tombstone and Cochise County.

Want more southern Arizona ghosts? Have a drink to calm your nerves at the tavern of The Gadsden Hotel in Douglas. The hotel, built in 1907, features a magnificent lobby and Italian marble staircase not to mention a few live-in ghosts including the members of a love triangle.

In downtown Tucson, Hotel Congress built in 1919 is best known for the capture of the notorious Dillinger gang. Although the gangster John Dillinger isn’t one of them, ghosts do seem to roam the hotel including a woman who smells of roses and a gentleman who peers out the windows of the second floor.

Perhaps ghosts are to be expected here—the hotel offers plenty of reasons to linger from live music at Club Congress to drinks in The Tap Room to a meal at Cup Café.

Daytime delight: A trip to southern Arizona isn’t complete without visiting Saguaro National Park where vast forests of the region’s iconic cactus stretch as far as the eye can see.

In 1910, by the time the Gila County Jail and Sherriff’s Office in Globe was completed vigilante violence was more likely to claim the lives of inmates than the hangman’s noose. In one case, an unknown assailant shot and killed a suspect awaiting trial by hiding in a second-floor window in the courthouse across the alley.

Though closed in 1981, the old jail remains a haunting place. Guides with AZ Ghost Tours take guests on a 3-hour tour through the jail’s sordid past and its history of infamous inmates. The jail is one of four locations tour guests can choose from with each one hosting up to 12 people for three hours.

One final note of caution before you head out searching for Arizona’s ghosts: Many events and activities are unsuitable for young children or have age restrictions.