It’s like Badlands meets a rainbow forest meets a desert 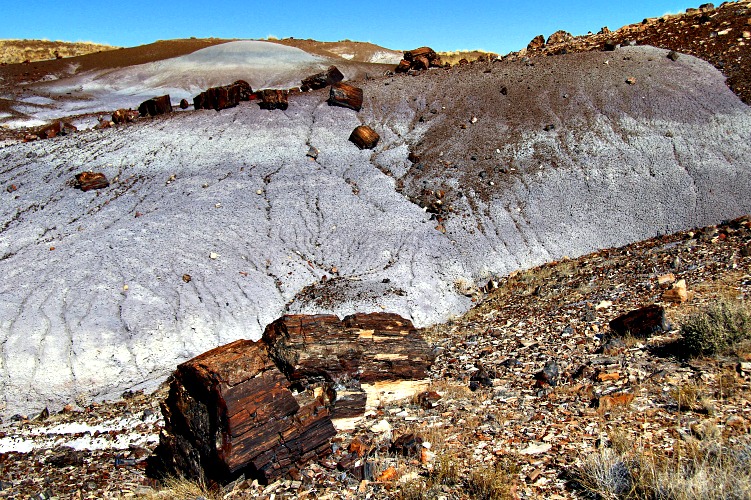 It may not be as famous as the Grand Canyon but no visit to northern Arizona is complete without a trip to Petrified Forest National Park. Covering over 220 square miles of Technicolor desert there’s way more to this park than its namesake fossilized wood.

Petrified Forest is also home to numerous paleontological exhibits, petroglyphs, and a wide range of living flora and fauna, including coyotes, bobcats, pronghorns, and over 200 species of birds. The park’s landscape has been inhabited by humans for at least 8,000 years and more than 600 archeological sites within the park’s boundaries reveal just a few of our ancient ancestors’ secrets.

Petrified Forest National Park is situated in the northern reaches of Arizona’s high desert climate which means its temperatures vary widely both by season and sometimes within a single day. July highs can easily reach over 100 degrees while the winter sees temperatures below freezing and occasional snow. Because the weather at the park is so variable it’s important to dress in layers and bring waterproof clothing.

The park is located about midway between Albuquerque and Flagstaff and is easily reached via I-40. Communities in the park’s direct vicinity include the small towns of Sanders, Joseph City, and Holbrook. Winslow—of Eagles song fame—is about an hour west of the park.

Visitors come to Petrified Forest National Park to enjoy this unique and surreal landscape, a surprising splash of color in the desert’s depths. Along with hiking, backpacking, and horseback riding, the Park Service also hosts a variety of ranger-led events including guided tours and cultural demonstrations. For full details on current events, check the park’s official calendar before your trip.

Unlike other tree-centric parks in the National Park System, this is a remote desert terrain with behemoth boulder-sized logs scattered across the land. The name “forest” is a misnomer in this arid land of wind-swept badlands, fossilized bones, faded petroglyphs, and petrified wood.

Located in the sleepy northeast part of the state, this is the only national park in America that’s bisected by Route 66 making it the most quintessential road trip park you never knew you needed. Plus, being overshadowed by that other Arizona national park Petrified Forest is comparatively quieter—with about 4 million fewer visitors than the Grand Canyon—but it’s especially enchanting.

With a dusty, barren backdrop reminiscent of a scene from Cars, this 221,390-acre park is a sleeper hit for geologists, paleontologists, and tree-huggers—even though the resident trees have been dead for 200 million years.

Whereas once mighty trees stood as tall as sequoias in tropical, dinosaur-dwelling jungles, they’ve long since succumbed to the powers of Mother Nature. Preserved in time, these trees were felled by raging rivers hundreds of millions of years ago then buried under sediment and slowly crystalized by volcanic ash and silica.

Nowadays, remnants of Arizona’s tropical past have long since dwindled, leaving behind gigantic petrified logs that have been almost entirely transformed into solid quartz. Serious desert bling, the logs get their kaleidoscopic shimmer from iron, carbon, and manganese imbuing tints of purple and royal green.

It may not look like much at first but this blink-and-you’ll-miss-it park is home to one of the largest collections of petrified wood on Earth, perfectly preserved relics of a prehistoric era where rivers once raged and terrifying reptilians once prowled. Composed of several smaller “forests,” like Rainbow Forest and Painted Desert the park is teeming with lustrous logs strewn across badlands and buttes. Home to easy hiking trails, Jurassic-level fossils, and ancient petroglyphs, Petrified Forest is like a road trip time capsule to a bygone epoch. Here’s what to know about visiting.

Unlike Grand Canyon National Park which sees more than 4 million annual visitors, Petrified Forest sees a scant 600,000 visitors each year making this one low-key park where you don’t need to worry about crowds, traffic, or a lack of trailhead parking spaces. The only thing you need to contend with when mapping out a stop at Petrified Forest is the weather. This is Arizona after all—a state whose scorching forecasts are decidedly not low-key.

Thanks to its high elevation around 5,800 feet the park isn’t as searingly hot as much of the rest of the state but July and August can still see temps soar well into the 90s. And because you’re that much closer to the sun you’ll feel the burn. This being the desert, things cool off dramatically after sunset plummeting down to the low 50s even at the summer peak.

While summer is prime time for the park your best bet to beat the heat is to arrive early—unlike most national parks, Petrified Forest has designated park hours of 8 am–6 pm and there’s a literal gate on the main park road (keep in mind that Arizona does not observe daylight savings time).

Although the park sees very little precipitation, July and August are the months when afternoon storms are most likely which would be refreshing if it weren’t for the fact that rain turns the sandy landscape into one big slippery mud pit. Winter gets shockingly cool by most Arizona standards with highs in the mid-40s. Spring can be windy but dry and fall still gets some of those tapered thunderstorms but with comfortably cooler temperatures.

With Route 66 conveniently weaving right through the park making Petrified Forest the only national park with a section of the Americana highway, this is one park that’s especially perfect for road trips.

The main artery is Park Road which meanders for 28 miles from the Painted Desert Visitor Center in the north to the Rainbow Forest Museum on the southern end. Not only straightforward and easy the road is one of the most epic and enchanting scenic drives in any national park with numerous pullouts to park and gawk. You’ll also find several short and easy hiking trails going from the lookout spots heading into the quiet wilderness. Of the park’s seven designated trails none are more than three miles and they’re all dog-friendly.

Start with a stop at the visitor center where exhibits and an introductory film show how these once-soaring trees transformed into the bejeweled boulders they are today. Driving south, prime pit stops include Puerco Pueblo and Newspaper Rock for petroglyphs and indigenous lore.

You’ll also find must-do trails like Blue Mesa which is a prime example of quality over quantity—a short paved loop begins atop a ridge of blue-tinted badlands before descending into the desert dotted with shimmering petrified wood. For even more wow stop at the Giant Logs Trail, home to the largest fallen trees in the park including Old Faithful, a log so large that it’s as wide as an RV.

While designated trails are sparse, visitors can venture into the park’s 50,000 acres of backcountry wilderness, hiking and camping wherever their heart desires (as long as you’re at least a mile from the road).

Sure, you could watch the Jurassic World movie or you can just live your best Jurassic life in Petrified Forest (without the risk of being chased by velociraptor dinosaurs), home to real-deal fossils and some intimidatingly epic history.

When these trees once stood some 200 feet tall in a sub-tropical wilderness that looks nothing like present-day Arizona the region was located further toward the Equator. It once swarmed with dinos so fierce and huge—including crocodile-like nightmare creatures—they would make the Jurassic Park franchise look like a Nickelodeon cartoon. Of the park’s insightful museums, the Rainbow Forest Museum at the southern end contains fossils and exhibits that tell the story of the region’s Jurassic-level past.

About 200 million years later, the “forest” was once again abuzz with new residents. Evidence exists of indigenous people living here for millennia leaving behind preserved remnants like rock-carved petroglyphs at sites like Newspaper Rock.

To delve even deeper into Native American lore, the Puerco Pueblo Trail is a hop and skip to a once-thriving village that stood around the year 1300 comprised mostly of wood and mud. The most intact of the park’s bygone villages, Puerco Pueblo still has multiple open-air rooms anchored by an inner plaza that once served as a communal, ceremonial gathering place.

Where to camp near Petrified Forest

Around here, campground sites are even more sparse than the hiking trails. Aside from camping in the primitive backcountry, there are no campgrounds in the park, and staying overnight in an RV or otherwise is not allowed—the gates on the Park Road close at 6 p.m. and that means it’s time to go. To camp, you’ll need to acquire a wilderness permit which is free from either visitor center on the day you plan on roughing it.

Outside of the park, campgrounds—for both RVers and tents—can be found at nearby national park sites like Canyon de Chelly National Monument as well as in Apache-Sitgreaves National Forest and state parks like Homolovi State Park and Lyman Lake State Park.

Related article: The Most Beautiful Places in Arizona (That Aren’t the Grand Canyon)

For a private park with full-hookups, OK RV Park in Holbrook is your best bet.

Unlike some national parks where nearby restaurant options are surprisingly abundant, Petrified Forest is not a foodie paradise. Holbrook is comprised mostly of chains save for a few straightforward mom-and-pop spots like Tom & Suzie’s Diner and Sombreritos Mexican Food. But you’re road-tripping here for the fossilized trees, after all, not the haute cuisine.

Quite a forest of petrified trees was discovered today…they are converted into beautiful specimens of variegated jasper. One trunk was measured ten feet in diameter, and more than one hundred feet in length…