Whether you park for ten minutes or ten days, what destinations do you pull off the highway for? 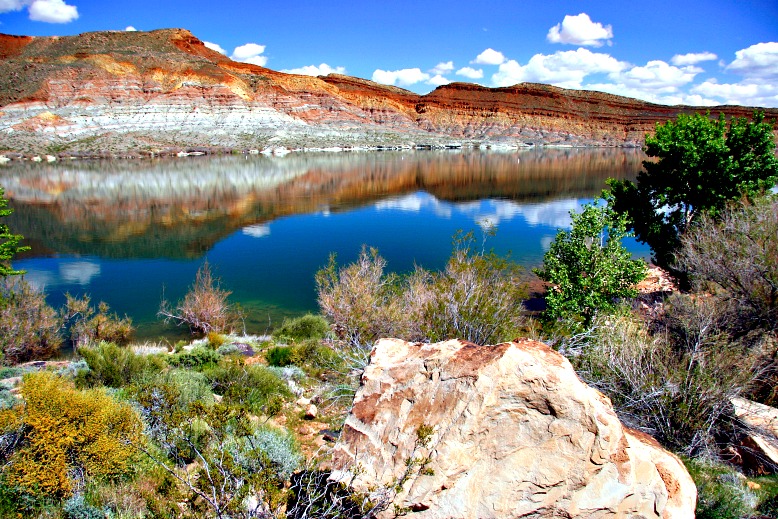 At some point, everyone starts to think about their dream road trip. For some, it’s a jaunt to the Grand Canyon or touring the Mighty Five in a decked-out RV. For others, it’s traveling Historic Route 66 or the Blue Ridge Parkway. No matter the destination, though, everyone needs to make stops on the way. What are some of your favorites?

For my purpose, a stop is anything from a national park to a state park or a roadside attraction to a Texas BBQ joint. Anything that gets you to pull off the highway, turn off your engine, and stretch your legs a bit—whether it’s to hike a mountain trail or tour a living history museum is up to you.

My vote for the perfect road trip stop is multifaceted and an ongoing list as I travel to new places and explore America’s scenic wonders.

Houston and Austin can quibble all they want about who has the best barbecue, but the clear winner is Lockhart. This small town 35 miles south of Austin is the Barbecue Capital of Texas—and that’s not just a municipal marketing ploy. The Texas State Legislature passed a resolution in 2003 officially giving Lockhart the title. Hundreds of thousands of people make the trek to Lockhart every year where four barbecue joints cook up mouth-watering meats made by legendary pitmasters. Here, meat is served in boxes by the pound and eaten off butcher paper on long, wooden tables.

Vermont Maple has been the standard by which all syrups are judged. I think you can taste eight generations of experience in Morse Farm Maple Sugarworks. The Morse Family has been making maple syrup and related products in Vermont for 200 years. And their folksy maple farm is an interesting place to visit any time of year.

Nestled on a hilltop just 2.7 miles outside of Montpelier, the smallest state capital in the U.S., Morse Farm is a throwback to a simpler, quieter time when generations of the same family worked together to carve out a living on the land.

Related article: Must-See under the Radar Small Towns to Seek Out this Fall

You’ll hear an informative and fascinating presentation about the history and operation of the farm and you can take a stroll on the trail among some of the sugar maple trees. There are farm animals to feed and of course there is a gift shop with a wide assortment of the farm’s products for sale.

Open daily, with slight variation in hours by season. No admission charge. Harvesting season is mid-March to Mid-April. Ample parking is available, including pull-through parking for RVs.

Drive the 17-mile dirt road through Valley of the Gods and you’re left wondering why its more famous neighbor, Monument Valley, attracts visitors in almost infinitely greater numbers. Valley of the Gods features spectacular mesas, buttes, and spires, but none of the crowds; it’s possible you won’t see another vehicle as you make your way past rock formations such as Lady In A Tub, Setting Hen Butte, and Seven Sailors.

The west entrance is situated on Utah Hwy 261, 10 miles north of Mexican Hat; the east entrance begins on US Hwy 163 about 7 miles east of Mexican Hat. The road through the park is level-graded dirt; a high clearance vehicle is generally recommended.

Mesa Verde, Spanish for green table, offers a spectacular look into the lives of the Ancestral Pueblo people who made it their home for over 700 years, from A.D. 600 to 1300. Today the park protects nearly 5,000 known archeological sites including 600 cliff dwellings. These sites are some of the most notable and best preserved in the United States.

About 1,400 years ago, a group of people living in the Four Corners region chose Mesa Verde as their home. For more than 700 years they and their descendants lived and flourished here, eventually building elaborate stone communities in the sheltered alcoves of the canyon walls. Then, in the late 1200s, they left their homes and moved away in the span of a generation or two. Mesa Verde National Park preserves a spectacular reminder of this ancient culture.

It’s no surprise that Bardstown has been named one of the most beautiful small towns in America more than once. With several well-known bourbon distilleries, wineries, and historic sites, Kentucky’s second-oldest town has a lot to offer the traveler.

You’re here for the bourbon, right? Start your tours with a trip to the oldest fully functioning distillery in Bardstown, Barton 1792 Distillery, famous for its signature 1792 Bourbon. Visitors can tour the property’s 196 acres, which showcase more than 25 barrel-aging warehouses, a picturesque stillhouse, and an award-winning distillery. Tours are complimentary and so are the tastings at this local distillery.

Located within the Okefenokee National Wildlife Refuge, this remote park offers access to the breathtaking wealth of flora and fauna of America’s largest black water swamp. Reserve a place on one of the guided pontoon boat tours and enter a primeval world of moss-draped trees, ibis, storks, turtles, and of course the American Alligator, an estimated 12,000 of which live within the refuge. A boardwalk trail next to the boat dock makes it easy to explore a small area of the swamp on foot.

Stephen C. Foster State Park is a certified dark sky park allowing guests to experience some of the darkest skies in the southeast. Nine cottages are available to rent, and there’s a campsite for tents, trailers, and motorhomes.

Famously known as the oldest continuously operating trading post on the Navajo Nation (it’s been here since 1876), Hubbell Trading Post is a part historic site, part museum/gallery, and part thriving retail operation specializing in authentic Navajo rugs, jewelry, and pottery. A visit to the adjacent Hubbell family home with an impressive collection of Southwestern art and Native American arts and crafts is recommended.

A functioning Catholic church intermittently since 1731, Mission Concepcion is a picturesque historic structure that has been declared a UNESCO World Heritage Site, only a short distance from San Antonio’s most famous mission, The Alamo. It’s worth dropping by for a look and some photos. In particular, keep an eye out for the remnants of the frescoes that were painted on the building when it was constructed, but have badly faded over time.

Near the site of the first permanent English settlement in America, established in 1607, Jamestown Settlement preserves and recreates life at the time. There are four components to the complex. As you enter, there are museum exhibits featuring artifacts and interpretations of the lives of the colonists, the natives, and the Africans who were forcibly brought along.

Continuing outside, you come to a recreated Powhatan village; farther down the path, you come to a recreated colonial fort; then on down to the water, you’ll see, and be able to board, replicas of the three ships that brought the settlers. In each of these outdoor locations, there are interpreters attired in appropriate garb to answer your questions and demonstrate period skills, from cooking to preparing an animal hide to firing a rifle.

Swamp tours are a must-do for anyone visiting Louisiana and Lake Martin is home to one of the state’s most impressive collections of wildlife. No one can make guarantees where nature’s concerned but a trip out onto this beautiful, man-made lake is likely to bring close-up views of birds including egrets, herons, roseate spoonbills, and eagles as well as the ‘gators for which the region is famous. Champagne’s Cajun Swamp Tours offer trips out into the cypress swamps every day. Their guides are friendly, knowledgeable, and full of character.

The two beautiful Navajo Bridges that span the Colorado River’s Marble Canyon may look identical but they were built more than 65 years apart. The first bridge opened to traffic in 1929 and was, at the time, the highest steel arch bridge in the world. However, it was not designed to carry modern day traffic and its replacement more than twice as wide opened in 1995. Rather than dismantling the original bridge, they left it in place to allow pedestrians to enjoy the spectacular view of the river 467 feet below. Take time to visit the interpretive center on the west side of the bridge.

One of the pleasures of driving this part of Utah (in particular the section of US Route 191 running north from Bluff through Blanding, Monticello, and Moab) is happening upon the incredible rock formations that seem to appear around every corner. This one, Wilson Arch, was named after Joe Wilson, a local pioneer who had a cabin nearby in Dry Valley. It’s an easy hike up to the arch and makes for great photos.

Step back in time to learn about Fredericksburg’s German heritage at Pioneer Museum. The 3.5-acre site gives a glimpse into the lives of the early German settlers in the frontier town of Fredericksburg from the 1840s to the 1920s. Visit the National Museum of Pacific War, a Smithsonian-affiliated museum dedicated to telling the story of the Pacific Theater during World War II. With interactive exhibits and endless galleries and stunning grounds, the museum will inspire all generations.

Enjoy Fredericksburg’s diverse culinary scene. From German food to burgers to fine dining, Fredericksburg has something for everyone’s taste. Sip wine at any of the more than 50 wineries in the Fredericksburg area, enjoy a self-guided trip down Wine Road 290 on your own or opt for a wine tour with any of our local wine tour companies.

At 3,030-feet this is the world’s third longest single arch bridge. At 876 feet above the river, it is also one of the tallest. The visitor center has picnic areas and hiking trails with spectacular views of bridge and gorge. White water rafting and hiking are popular in summer.

Bridge Day, on the third Saturday in October (October 15, 2022), features B.A.S.E. jumpers and rappellers in a festival atmosphere. New River Gorge Bridge is located on U.S. Highway 19 between Summersville and Beckley.

Once a thriving mining town, then a virtual ghost town when Route 66 was bypassed, Oatman has been reborn as a popular tourist destination for its Old West flavor. Many of its historic buildings still stand including the Oatman Hotel where Clark Gable and Carole Lombard spent a night of their honeymoon and where the lobby is covered by thousands of dollar bills that tourists have attached to the walls and ceilings.

Related article: 10 of the Best Small Towns to Visit this Fall

There are cowboy shootouts and gift shops galore. But above all, there are the burros, descendants of animals released in the hills by miners. They function today as the semi-official stop lights wandering the narrow streets and poking their heads into car windows looking for handouts.

Despite its name, you’re likely to find beautiful weather in Hurricane. And that’s a good thing when you consider the outdoor adventures available just a stone’s throw from the small town. Take advantage of the proximity to Sand Hollow Reservoir and Sand Hollow State Park. Of course, Hurricane is also a home base for many travelers to Zion National Park, so you’ll want to bring your hiking boots for the park’s most notable trails, like Angel’s Landing, Emerald Pools, and The Narrows.