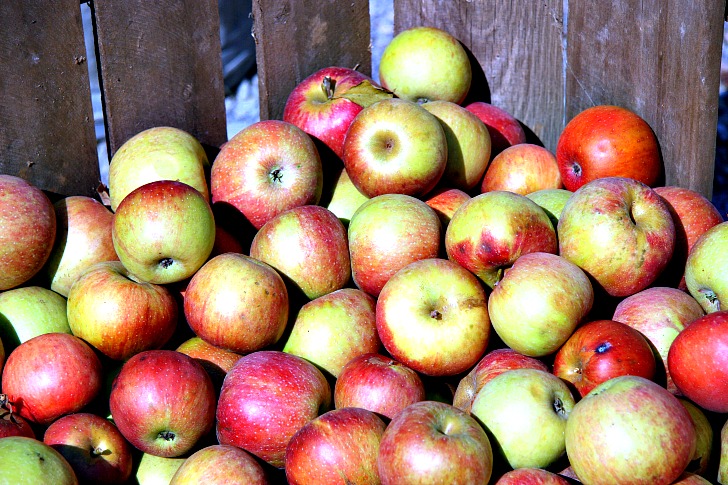 Pie is…the secret of our strength as a nation and the foundation of our industrial supremacy. Pie is the American synonym of prosperity. Pie is the food of the heroic. No pie-eating people can be permanently vanquished.

The saying as American as apple pie has been around for centuries. Traced back as early as 1851, this expression is used to express patriotism, usually heard when discussing things like baseball, beer, or rock-n-roll. But in a country where apples aren’t native to the land—nor is the pie for that matter—how did apple pie become so embedded in the American identity?

This flaky, fruit-filled dessert conjures memories of holidays huddled around the dinner table, steam rising from the lattice crust of a pie on the windowsill, and generations celebrating and enjoying time together. But apple pie wasn’t invented in the United States. As is the case for many aspects of American cuisine, the majority of its ingredients hail from abroad.

This fall, tip your basket to William Blaxton when you pluck a plump apple from a tree, bob for apples on Halloween, or cherish your grandmother’s amazing apple pie on Thanksgiving.

Reverend Blaxton, among other claims to fame, planted the first seeds that would fuel a pioneering nation and give apples an image of all-American wholesomeness.

A bookish, eccentric loner, the early English settler nurtured what historians believe were the first apple orchards in what is now the U.S. in present-day Boston in the 1620s. His name Blaxton is often modernized as Blackstone. A true pioneer, he settled Boston five years before the Puritans and in Rhode Island a year before Roger Williams.

There may be historical characters who did more than he did for apples in America but he was certainly the first—or at least the first known—to bring this exotic crop to our shores.

America’s national heritage is flavored with references to the sweet, juicy fruit. America’s biggest city is called the Big Apple. Wholesome institutions are as American as apple pie. Johnny Appleseed created an American legend spreading the gospel and the apple across the heartland.

Food historians and scientists believe the fruit is native to Central Asia in what is today the Tian Shan forest in Kazakhstan. Wild apples were domesticated there and spread along the Silk Road to Europe. The apple evolved along the Silk Road and in Europe before making it to England and then America via the New World’s early colonists.

The only apple indigenous to North America is the sour and small crabapple which doesn’t fit in well with desserts. Sweet apples have found a second home in the US; it produces the most apples in the world, next to China.

The apple reached Europe at least by the time of Ancient Greece and Rome and arrived in the Americas only after the explorations of Christopher Columbus sparked the greatest period of food fusion and cultural integration in world history.

The people of the New World in addition to apples soon savored Old World foods such as rice, onions, and coffee. Europeans, Asians, and Africans discovered Western Hemisphere flavors such as corn, potatoes, and tomatoes.

William Blaxton is believed to have been born on March 5, 1595, in Lincolnshire, England to John and Agnes (Hawley) Blaxton. His mother died when he was boy. He was ordained by the Church of England in 1621 then lost his father the following year.

As the news of English settlements in Jamestown and Plymouth trickled back to England, Blaxton set off for the New World as chaplain aboard the ship Katherine.

Blaxton arrived in Wessagusset in what is now Weymouth, Massachusetts just south of Boston in 1623. It was an ill-fated settlement. Captain Richard Gorges who led the expedition hastily returned to England. Blaxton stayed behind and ventured a few miles north to the Shawmut Peninsula the site of present-day downtown Boston in 1625. The Puritans, led by John Winthrop, arrived five years later.

The staid Puritan reformers and the oddball Anglican minister did not hit it off. So, for the third time in 12 years, Blaxton (or Blackstone) started a new life on his own.

“Because of theological and territorial disagreements with his new neighbors, Blackstone moved west in 1635 to enjoy the solitude and tranquility of a place he called ‘Study Hill’ in the Lonsdale section of Cumberland on the east bank of the river that now bears his name,” writes the Rhode Island Heritage Hall of Fame. “This move gave him the unique distinction of being present-day Rhode Island’s first permanent English settler.”

Apple experts say the earliest known American varieties likely descended from Blackstone’s Boston fruit trees. Blaxton’s first orchard was planted at the corner of what is now Beacon and Spruce streets in the heart of Boston between Beacon Hill and Boston Common. Blackstone planted his apple orchards from seed according to all reports while controlled varietals are grown by grafting.

The Roxbury russet named for a Boston neighborhood is the earliest known American apple variety and is traced to 1635, the year Blaxton left for Rhode Island. Heirloom apples—Rhode Island greening and yellow sweeting—also likely came from his first orchards.

Apples could also be dried, baked, distilled into vinegar—or, most commonly in colonial times—fermented into cider. They proved perfect food for the pioneers who were spreading across the continent.

William Blackstone died on May 26, 1675, in Cumberland, the Rhode Island town he first settled in 1635. The name Blackstone remains common throughout Massachusetts and Rhode Island.

The land he sold to the Puritans became Boston Common founded in 1634 just before he left the Shawmut Peninsula. It is the oldest public park in America today. It predates Central Park in New York City, for example, by 224 years.

When British troops invaded Brooklyn during the American Revolution in 1776, the British were stunned by the splendor of the orchards. The redcoats “regaled themselves with the fine apples which hung everywhere upon the trees in great abundance,” wrote author David McCullough in 1776, his epic work of history.

According to the American Pie Council, Americans consume $700 million worth of retail pies each year—and that doesn’t include those that are home-baked or sold by restaurants and independent bakers. That’s a lot of apple pie.

Though I’ve made the case here that apple pie isn’t so American after all, one could argue that just because something originated somewhere else doesn’t mean that it shouldn’t become a source of national pride elsewhere. America took the apple pie to heights it had never seen before and elevated it as a treasured part of its lore and history. And though it wouldn’t be fair to call apple pie “American” without acknowledging its past, the baked good seems to be just at home here as anywhere else in the world.

Apples are just like us. They come in many colors, many sizes, and many shapes. They are well rooted, just like we all want to be. They are collaborative, communicative, and they gift us with beautiful fruit. Apples teach us what it means to be alive and joyful on earth.