Discover the Waterpocket Fold, a geologic wrinkle on earth 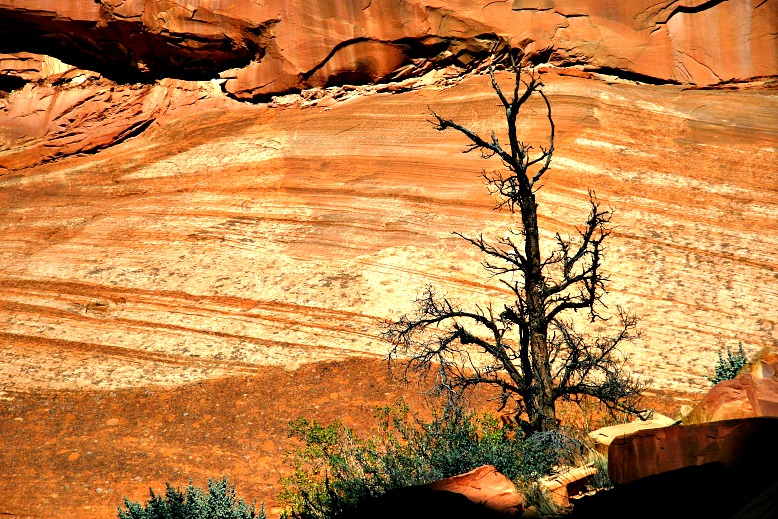 I’ve often said that all of southern Utah should be protected as national parkland. The entire region is filled with unusual, ornate, and beautiful geologic formations that take shape, color, and texture to a level that is truly beyond comprehension (unless you are a geologist and if that is the case you already know how special Capitol Reef is). The crown jewel of the park is Waterpocket Fold, the second largest monocline in North America, a feature that is often described as a wrinkle in the Earth’s crust resembling a coral reef turned inside out.

This one-of-a-kind landscape has sustained human life since long before European settlers knew about it. From the ancient Paleo-Indians who roamed here some 12,000 years ago to the more recent Ute and Southern Paiute peoples who were displaced from it, the land we now know as Capitol Reef has a much deeper and richer history than the average visitor knows.

Capitol Reef is perhaps Utah’s most underrated National Park. The park is about 2.5 hours east of Bryce Canyon via the Scenic Byway 12, an All-American Road. Much like Zion, the landscape is centered amid massive red rock cliffs.

Situated squarely in the desert, Capitol Reef sees less than 10 inches of rain per year though it does experience occasional snowfall during its chilly winter. Daytime temperatures in July and August can climb past the 100 degrees mark but the climate is generally temperate and pleasant with highs in the 40s even in December and January.

Although undeniably remote, Capitol Reef is served by a variety of small gateway towns which offer camping, restaurants, and other attractions to visitors—the closest of which is Torrey. Park-goers can also reach Grover, Teasdale, and Bicknell within a few minutes.

Explore a wrinkle in space-time—or at least in the earth’s surface—at Capitol Reef. Surrounding the geological wonder known as the Waterpocket Fold, the park is known for its fairytale landscape boasting a variety of landmarks like the Chimney Rock pillar, the Hickman Bridge arch, and Cathedral Valley. Capitol Reef National Park is also home to over 2,700 fruit-bearing trees situated in its historic orchards—apples, cherries, peaches, apricots, plums, mulberries, and more are seasonally available for fresh picking.

The park and its surrounding areas protected under the Bureau of Land Management are full of canyons, ridges, buttes, badlands, and monoliths creating a 387-mile playground for modern-day explorers while serving up prize shots for landscape photographers. Beyond the natural landscape is a rich cultural past spanning more than a thousand years that was cultivated by the Fremont Indians and later, Mormon settlers who pioneered the park during the turn of the 19th century. Between easy-to-access areas surrounded by undeniable beauty, boundless backcountry wilderness to explore, and interesting local history, it is unsurprising that Capitol Reef National Park sees high visitation numbers despite its off-the-beaten-path location.

Like many national parks, Capitol Reef is divided into separate and very distinct areas— Fruita Rural Historic District, Cathedral Valley, and Waterpocket Fold. I’ve outlined them below, there are three, and included some awesome spots to stop at in each of them.

The Fruita Rural Historic District is the most popular area in the park in terms of visitation. The paved Scenic Drive starting near the visitor center travels 20 miles (out and back) through gorgeous slick rock scenery and provides access along the way to many established trails that trot off into the landscape. There is an important cultural history in this area of the park as well.

The village of Fruita was established along the Fremont River by Mormon pioneers in the late 1800s who found there a rich utopia where they could flourish as the Fremont Indians had many centuries prior. The new settlers planted fruit trees along irrigation lines that were dug by the Fremont culture, trees that remain today. With that, an opportune first stop…

The Fruita Orchards are a popular place during the spring, summer, and fall when parkgoers file into the valley to harvest peaches, apricots, and apples. Anyone is welcome to visit open areas to sample and harvest fruit for a small fee. Healthy snacks for the trail!

Petroglyphs of the Fremont Culture

Carved into the sandstone formations in Fruita is the Fremont Petroglyphs, chipped rock art depicting animals, people, shapes, and other forms indicative of their hunter/gatherer existence. The petroglyphs can be seen on several large panels east of the park visitor center on UT Highway 24. There is parking, a boardwalk, and viewing platforms making it easy for all to catch a glimpse of the intriguing relics.

No visit to a Utah national park could be complete without a sandstone arch framing the scenic landscape. The Hickman Bridge is a 133-foot natural bridge with canyon views in all directions. Getting to it is easy with roadside parking on UT 24. The trail to the bridge is a cool 1-mile.

The Mormon Church (Church of Jesus Christ of Latter-day Saints, or LDS) with the help of local settlers built this one-room log structure in 1898 using natural resources found in the area that included shingles supplied by a local mill and donations of doors and windows from neighboring communities. The structure was used as a school until attendance superseded the space available. The school then evolved into a meeting house for members of the LDS church. The Torrey School and Church are now on the National Register as a historical building.

This rural homestead is a classic example of early 20th-century rural Utah farm homes. It was built by Calvin Pendleton in 1908 who occupied it with his family for eight years. Other private owners followed the Pendleton family until eventually, the land became part of the national park. The homestead sits on 200 acres of land and has seven rooms, a barn, and smokehouse, a garden, rock walls, and a pasture. This homestead is a prized example of earlier times and as such has been placed on the National Register of Historic Places. The Gifford House is operated today in partnership with the Capitol Reef Natural History Association and the U.S. National Park Service which operate it as a museum and learning center to preserve and to also raise awareness of Utah’s cultural past.

Panorama Point is an easy turn-off from US 24 and offers exactly what the name suggests—panoramic views in all directions. After following a short walk on a paved path to the top of the hill, fantastic views await particularly so at sunset. It is also a fine place to get a sense of the lay of the land.

The Cathedral Valley area is a backcountry dream where you can get lost in solitude while exploring Utah’s rugged and remote wilderness ecosystems. Not only is the Cathedral Valley area completely stunning but its far-flung location is infrequently visited allowing visitors a respite from crowds found in more accessible areas. There is much to see and do in the Cathedral Valley—driving on primitive roads under big skies, shooting the sunrise at cool formations like the Temple of the Sun, Moon, and Stars, camping and hiking with peace as your guides… it’s amazing out there!

One of the coolest sites in the national park is Glass Mountain, a small formation of exposed gypsum made of selenite crystals. The textured mound looks like it is decorated by broad brush strokes of dirt exposing glassy crystals. You can find it next to the Temple of the Moon monolith and plan for at least 30 minutes to explore it. Even though it is relatively small when compared to other features in the park and climbing on its delicate gem is forbidden it is so unique and interesting that you will probably find yourself doing laps around it spellbound by the incredible textured shapes of the gypsum.

Five miles from the Cathedral Valley campground is the Gypsum Sinkhole—a 200-foot deep, 50-foot wide chasm that formed when water dissolved the below-ground gypsum foundation allowing the site to cave in. It is astounding to stand over and look down into a depression like this falling so deep into the Earth, a reminder of the forces of nature always at work beneath the planetary surface.

The historic Morrell Cabin and Corral in Cathedral Valley sheds light on how this area has been used during the last century. It was built in the 1920s on Thousand Lake Mountain by a wealthy landowner named Paul Christensen and was moved during the 1930s to its current location in the Cathedral Valley by Lesley Morrell. Locally known as “Les’s Cabin,” it once served as a stop along for cattle ranchers traveling to and from Thousand Lake Mountain where they could eat, sleep, rest, and refuel. The National Park Service purchased the site in 1970. It is listed today on the National Registrar of Historic Places.

Waterpocket Fold, the geologic feature, is a 100-mile rocky spine extending from Thousand Lake Mountain to Lake Powell. Its technical name is a monocline which citing the Oxford Dictionary is a “bend in rock strata that is otherwise uniformly dipping or horizontal.”

Waterpocket Fold, the area, is the least visited section of the national park. It has few services and few marked trails that are of course highly enticing for backpackers who want to head out into the wilderness to get lost. The Halls Creek Narrows and the Lower Muley Twist Canyon are two of the most popular spots in the park to set off from on a backpacking adventure.

How the park got its name: Capitol Reef was given its name for the white domes of Navajo sandstone that resemble the domes of the capitol buildings found throughout the United States and for the rocky cliff formations, the “reef,” which presents a barrier to travel through this rugged terrain just as it does in the sea.

Iconic site in the park: The massive monolith formations found in the Cathedral Valley look like church cathedrals as their name suggests and jump out from the backdrop like the subject of a children’s pop-up book. The 57-mile loop drive taken to get there passes through the San Rafael Swell, an all-terrain environment that takes some commitment (and a high clearance vehicle) to get to. The most well-known “cathedrals” are the 400-foot high Temple of the Sun and Temple of the Moon, each of which captures beautiful golden light during both sunrise and sunset depending on where you stand.

Accessible adventure: Ancient past meets modern present for auto-tourists along the paved park road (UT 24) and Scenic Drive, two separate roads that wind through the heart of the park in the Fruita Rural Historic District. These roads bring visitors passed rivers, valleys, orchards, historical rural buildings, petroglyphs, and aside formations made of sedimentary rock that is 225 million years old. There are nearly 40 established trails throughout the Fruita area as well as plenty of wildlife-watching opportunities, so keep your eyes peeled and drive safely.

Utah is home to what the state calls “The Mighty 5” —Arches, Canyonlands, Zion, Bryce, and Capitol Reef National Parks.

The nearest traffic light to Capitol Reef National Park is 78 miles away.

There is no formal entrance to the national park. Payment is due at the visitor center and you are on your honor. Have honor!

There are 10 sites in Capitol Reef National Park on the National Registrar of Historic Places.

Capitol Reef is approximately 60 miles long and about 6 miles wide.

Most of Capitol Reef is made of sedimentary strata rock ranging in age from 270 to 80 million years old.

There are 239 recorded bird species in the national park.

…of what value are objects of a past people if we don’t allow ourselves to be touched by them. They are alive. They have a voice. They remind us what it means to be human; that it is our nature to survive, to be resourceful, to be attentive to the world we live in.