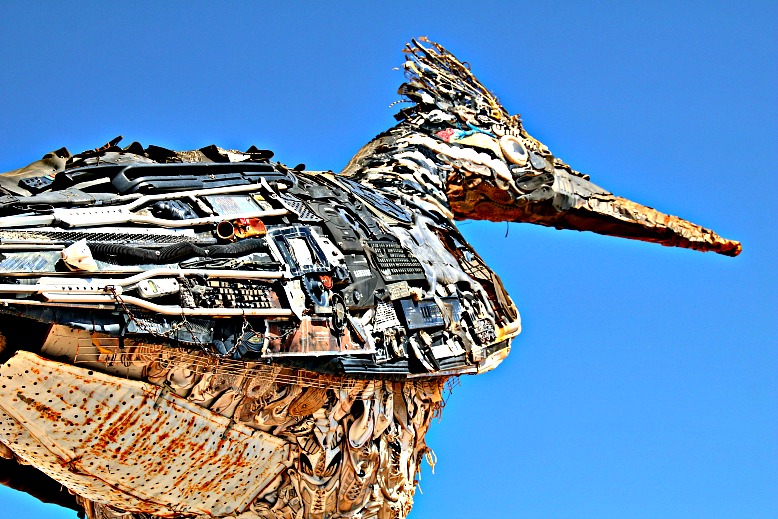 One of the reasons people travel in RVs is to see things. They see epic places like The Grand Canyon, Yosemite, and the Black Hills of South Dakota. On the way to the big stuff, there are plenty of small sites that capture the public’s attention, too, like the World’s Largest Roadrunner, historical markers, and that corny attraction in Mitchell, South Dakota.

With wanderlust and weirdness in mind, we road-tripped across the country and found the oddest, most wonderful, and most puzzling roadside attractions where we least expected. Better stock up on boudin and pork cracklins, kolache and doughnuts, and other snack foods: there are going to be many, many detours in your future.

Basically Everything in Roswell

Is it fair to call an entire town a roadside attraction? Probably not! But the sheer number of alien-related stuff populating the streets of Roswell makes it unavoidable. There are makeshift spaceships you can tour. Straight-up UFO “museums.” A fake-ass alien autopsy site. Gift shops galore. If there are actual aliens tucked away in Roswell, they pulled the ingenious move of hiding in plain sight, surrounded by every kind of gaudy, over-the-top kitsch as possible. Well played Martians.

Mother of All Tourist Traps

One of (if not the) the most prominent tourist traps has to be Wall Drug. You can’t miss it: Not only because it’s massive, but because you’ll see hundreds of hand-painted signs across multiple states, luring tourists in with the promise of free ice water and $.05 coffee (the ice water’s great, the coffee not so much).

And even if you wish to avoid it, you kind of can’t: At the intersection of East and West, North and South, it’s one of the last places to get gas for a while, regardless of where you’re going. Just grab a “where the heck is Wall Drug” bumper sticker, eat a donut, and soak in the Americana.

Monsters in the Desert

Something prehistoric. Something mythical. Something otherworldly. Here, in the middle of the desert, is a magical array of free-standing sculptures that will astound you. Imagine driving along Borrego Springs Road and something catches your attention—a dark form in the desert landscape. You spy a horse as it rears off to the side of the road. You look again and it is big, but it doesn’t seem to be moving. Then you look again and you realize it is a huge sculpture that has captured your attention.

Then, rising out of the flat desert landscape, an elephant appears. Alarmingly close by, a T-Rex bears its maw chasing a saber-tooth tiger. From the corners of your eyes, these large structures can be deceptively realistic. This is not a mirage but the gifts of visionary benefactor Dennis Avery (now deceased) and the craft of artist/welder Ricardo Breceda.

You’re driving down US Highway 191 south of Moab, thinking vaguely of finding a place to pull over and stretch, maybe get some snacks, when you see, in the distance: a massive red rock face with blazing white detailing. You drive closer. “HOLE N” THE ROCK”.

Is it … literally a hole in the rock? It is, kinda, yes. Hole N” The Rock is a 5,000-square-foot home carved into the rock where you’ll also find a trading post, general store, art collection, and petting zoo—camels, zebras, albino raccoons. You are wondering whether you can feed them, yes you can.

Nestled in the scenic hills of Desert Hot Springs, a Hopi-inspired pueblo sits against a hillside. Not just any pueblo but one built with natural materials collected throughout the desert. Yerxa’s pueblo is a four-story, 5,000-square-foot structure. It has 160 windows, 65 doors, 30 rooflines, and 35 rooms. When homesteader Yerxa Cabot settled in Desert Hot Springs, he used re-purposed materials and a little ingenuity to build a home so unique it remains a preserved museum to this day.

This corn crazed prairie town in South Dakota is home to the high school sports teams the Kernels, local radio station KORN, and the “architectural showplace of the world” known as the Mitchell Corn Palace. Its czarist-Russia exterior and intricate murals are made entirely out of local corn and grains (it’s refurbished annually), and the onion domes and minarets make it the world’s only corn palace, but would the world really need more than one of these?

Related article: Blow Your Mind at the Weirdest Roadside Attractions across America

One of the largest pistachio tree grooves in New Mexico, PistachioLand is a destination that can be enjoyed by all ages. Located in the Tularosa Basin outside of Alamogordo it’s an easy day trips from Las Cruces and can be combined with a visit to White Sands National Park.

Superstition Mountain Lost Dutchman Museum is the keeper and purveyor of the colorful tales of bygone days, both true and mythical. Located on the Apache Trail (Arizona Highway 88), the museum is comprised of numerous outdoor structures including the Apacheland Barn and the Elvis Chapel, the last surviving structures from Apacheland Movie Ranch, a huge working 20-stamp gold mill, a historical model railroad, Western storefronts, an exhibit hall and gift shop/bookstore, and nature trail.

An Encounter with the World’s Largest Roadrunner

The Roadrunner is the official state bird of New Mexico. A giant recycled roadrunner—20 feet tall and 40 feet long—has been an icon of Las Cruces ever since artist Olin Calk built it in 1993. It was made exclusively of items salvaged from the landfill.

In early 2001, Olin stripped off the old junk, replaced it with new junk, and moved the roadrunner to a rest stop along Interstate 10, just west of the city. Signs around the sculpture warned of rattlesnakes, but when we stopped by to visit people were blissfully trudging out to the big bird anyway, to pose for snapshots or examine the junk (We did, too).