Arizona hikes, rides, tours, and a local winery or two 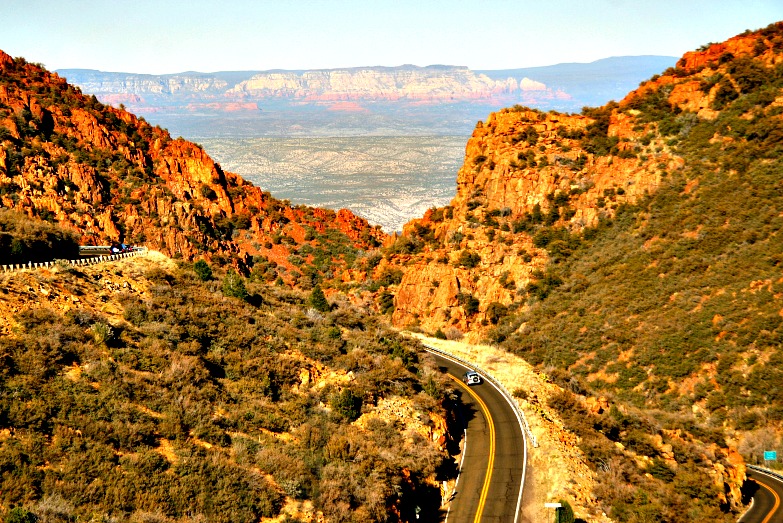 All through the summer, Arizona has bounced between extremes—going from record-breaking heat to a deluge of monsoon storms. Since fall is not a season prone to anything quite that intense things should calm down. Autumn comforts even as it calls locals and returning snowbirds outside to play. Basking under big blue skies while reveling in mild sunshine, fall is a perfect time to go exploring.

For an incredible fall road trip, take the drive to the geographic center of Arizona, the Verde Valley. The wide valley stretches from Mingus Mountain to the Mogollon Rim, a lush transition zone separating the Sonoran Desert from the high country and slashed by the winding Verde River.

Scenic small towns full of personality are sprinkled throughout the valley just a few miles apart creating plenty of easily accessed options. Here are a few.

Out of Africa Wildlife Park

Nestled in the high desert of Camp Verde, Out of Africa Wildlife Park provides a sanctuary for hundreds of exotic animals and features dozens of large predators. The preserve spreads across 100 acres of rolling terrain on the slopes of the Black Hills. The large natural habitats eliminate stress-induced behavior.

Tiger Splash is Out of Africa’s signature show. There is no training and no tricks. The daily program is spontaneous, just animals frolicking with their caretakers. Fierce tigers engage in the sort of playful activities every housecat owner will recognize. It’s just the grand scale that makes it so impressive. Visitors can also take a narrated African Bush Safari and attend the Giant Snake Show.

Outside the park is Predator Zip Line which offers a two- to three-hour zip line tour across five lines and a suspension bridge high above the animals.

Not long ago, Cottonwood was a sleepy little burg with much of its small downtown sitting vacant. Everything changed when vineyards and wineries sprang up on nearby hillsides with rich volcanic soil.

Wine-tasting rooms opened, one after another, and soon restaurants, shops, galleries, and boutique hotels followed. The businesses filled the Prohibition-era buildings fronted by covered sidewalks along the three blocks of Old Town.

Such a picturesque and compact setting makes Old Town Cottonwood a popular destination for lovers of wine and food since so much can be sampled by walking a block or two.

Walk the Streets of Jerome

Most everybody knows about Jerome, the mile-high town clinging to the steep slope of Cleopatra Hill. It was once known as the Billion Dollar Mining Camp for the incredible wealth pulled from the ground.

After the mines closed it became a rickety ghost town saved by enterprising hippies who turned it into a thriving artist community with fine art and crafts studios and galleries, cool boutiques, mining museums, historical buildings, eclectic inns, and B&Bs, and memorable restaurants and bars lining its narrow, winding streets.

From the high perch of Jerome, views stretch across the Verde Valley to the sandstone cliffs of Sedona. Music spills from saloons and eateries as visitors prowl the shops moving from one level of town to the next, pausing to read historic plaques and admire the Victorian architecture. Jerome feels cut off from the rest of the world. It’s one of those towns where it always feels like you’re on vacation.

Go off-road the old-fashioned way when you climb aboard the Verde Canyon Railroad and rumble into scenic backcountry. The train departs from the station in Clarkdale and travels into a high-walled canyon carved by the Verde River.

If you want to enjoy red rock scenery while avoiding some of the crowds and traffic issues, hike a few trails on the far edge of West Sedona.

The Western Gateway Trails at the end of Cultural Park Place weave together a series of interconnected pathways across juniper-clad slopes above Dry Creek. Signs with maps at every junction make for easy navigation.

The gentle Roundabout Trail, a 2-mile loop, provides a quick introduction to the area as it branches off from the paved Centennial Trail and swings through shady woodlands and past a couple of small boulder fields. Curling back, it traces the edge of the mesa overlooking Dry Creek with views north of Cockscomb, Doe Mountain, and Bear Mountain.

You can create a slightly longer loop (3.3 miles) by combining the Stirrup and Saddle Up trails. After crossing an arroyo the route climbs to the top of a plateau where the views stretch to Courthouse Butte and Bell Rock at the other end of town.

If you want a little more of a workout, the Schuerman Mountain Trail can be accessed across the road from Sedona High School. It climbs at a moderate uphill slant to the top of an old volcano, now eroded into a rangy mesa.

There’s a great view of Cathedral Rock from the first overlook. It’s a 2-mile round-trip if you make this your turnaround. If you’re in a rambling mood, the trail continues across the broad back of the mountain, golden grasslands dotted with juniper and pine trees.

Apartment House of the Ancients

Sinagua built the five-story, 20-room structure about 1150 but abandoned it in the early 1400s. Montezuma Castle is built into a deep alcove with masonry rooms added in phases. A thick, substantial roof of sycamore beams, reeds, grasses, and clay often served as the floor of the next room built on top. The placement of rooms on the south-facing cliff helps regulate summer and winter temperatures. The series of long pole ladders used to climb from the base of the cliff to the small windows and doorways high above could be pulled in for the night.

Related article: The Ultimate Arizona Road Trip: 16 Places to See & Things to Do

A short self-guided loop trail leads from the visitor center past the cliff dwelling through a beautiful grove of Arizona sycamores and catclaw mimosa trees along spring-fed Beaver Creek. Benches along the path offered the perfect spot to view the massive structure.

The white-barked Arizona Sycamore is one of the most distinctive sights at Montezuma Castle often reaching heights of 80 feet. This tree once blanketed Arizona 63 million years ago when the climate was cool and moist. As the weather became drier these deciduous trees thrived only in areas close to permanent water, such as the perennial streams and canyon bottoms.

Drive 11 miles north to see the Montezuma Well which is part of the national monument. Along with the limestone sinkhole, cliff dwellings, and irrigation channels are characteristic of the prehistoric people who lived in the area. The water in the well which is 386 feet across has high levels of arsenic and other chemicals but it still supports endemic species such as water scorpions, snails, mud turtles, and leeches.

An Ancient Village on the Hill

Built atop a small 120 foot ridge is a large pueblo. Tuzigoot is Apache for crooked water; however, it was built by the Sinagua. With 77 ground floor rooms this pueblo held about 50 people. After about 100 years the population doubled and then doubled again later. By the time they finished building the pueblo, it had 110 rooms including second and third story structures and housed 250 people. An interesting fact is that Tuzigoot lacked ground level doors having roof-accessed doors instead.

The site is currently comprised of 42 acres that includes the hilltop pueblo, cliffs, and ridges in the valley and the Tavasci Marsh, a natural riparian area surrounding an old curve of the Verde River. A paved, fully accessible trail takes you through the pueblo giving you a good idea of what it would have looked like. Though the views from the ruins alone are worth the walk, one room is reconstructed and you can enter it and see what it would have looked like when inhabited.

Tuzigoot can be found in Clarkdale, Arizona, just west of Montezuma Castle and just north of Jerome. Visiting Tuzigoot is definitely worth your while!