If you’re dreaming of where to travel to experience it all, here are my picks for the best places to RV in December 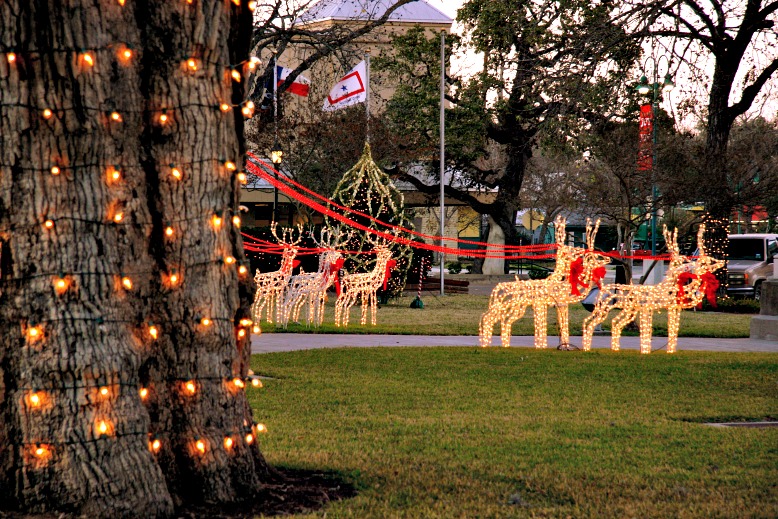 This analogy from the Bible’s Book of Proverbs points out the link between emotional and physical well-being: Joy is a powerful emotion as beneficial for an ailing soul as medical treatments are for a sick or injured body. This passage from Proverbs 17:22 suggests that if we possess good cheer, our confidence, laughter, and trust are likely to radiate to those we encounter. Sharing kindness—be it through gifts, singing, rituals, or visiting loved ones—is a worthy and healthy practice this holiday season, and beyond.

Barrio Viejo, meaning old neighborhood in Spanish, is an area near downtown Tucson that is an important, historical part of the community. This picturesque destination just south of the Tucson Convention Center lies between I-10 and Stone Avenue with Meyer and Main Avenues passing through the center.

The original Barrio neighborhood built between 1880 and 1920 was home to a diverse working class including Spanish, Mexican, Asian, and Hispanic. Using traditional Mexican Village architecture, houses were built of thick-walled adobe with a flat roof, wood beams, and ocotillo, or saguaro cactus ribs, coverings.

Begin your tour of Barrio Veijo at Five Points, the corner of Stone and 18th Streets. Over many decades the houses have been painted bold bright colors with doors/windows becoming works of art. Public buildings also have been treated with the same effect. The Barrio has become a major tourist attraction constantly drawing photographers, artists, and tour groups. In 1978, the Barrio was listed on the National Register of Historic Places.

Go for a festive stroll through this charming village in the Township of Langley to experience the best the holiday season has to offer. The picturesque village is often used as a backdrop for many Hallmark Christmas movies, so you’ll definitely feel like you’re a part of one. With twinkling lights brightening up the historic village, it’s like it was made specifically for the small screen.

Hoover Dam, once known as Boulder Dam, is a concrete arch-gravity dam in the Black Canyon of the Colorado River on the border between Arizona and Nevada. It was constructed between 1931 and 1936 during the Great Depression and was dedicated on September 30, 1935, by President Franklin Roosevelt. Its construction was the result of a massive effort involving thousands of workers and cost over one hundred lives. The dam was controversially named in honor of President Herbert Hoover.

Since about 1900, the Black Canyon and nearby Boulder Canyon had been investigated for their potential to support a dam that would control floods, provide irrigation water, and produce hydroelectric power. In 1928, Congress authorized the project. The winning bid to build the dam was submitted by a consortium called Six Companies, Inc. which began construction on the dam in early 1931. Such a large concrete structure had never been built before and some of the techniques were unproven. The torrid summer weather and the lack of facilities near the site also presented difficulties. Nevertheless, Six Companies turned over the dam to the federal government on March 1, 1936, more than two years ahead of schedule.

Hoover Dam impounds Lake Mead and is located near Boulder City, Nevada, a municipality originally constructed for workers on the construction project about 25 miles southeast of Las Vegas. The dam’s generators provide power for public and private utilities in Nevada, Arizona, and California. Hoover Dam is a major tourist attraction with nearly a million people touring the dam each year. Heavily travelled U.S. 93 ran along the dam’s crest until October 2010 when the Hoover Dam Bypass opened.

Christmas in the Park

Experience Christmas on the Texas Gulf Coast at Goose Island State Park! See the park in lights, enjoy holiday activities, and CAMP FOR FREE when you decorate your campsite.

Visitors are invited to enjoy a FREE drive through the Live Oak forest to see campsites decorated in lights and join the park rangers at Santa’s Village at the CCC Recreation Hall for holiday crafts, games, hot chocolate around the campfire, and to drop off letters to Santa in the North Pole Mailbox.

The Peachoid is a 135 feet tall water tower in Gaffney that resembles a peach. The water tower holds one million gallons of water and is located off Peachoid Road by Interstate 85 between exits 90 and 92 (near the Cherokee Foothills Scenic Highway). Usually referred to by locals as The Peach and by passing motorists as Mr. Peach or The Moon over Gaffney, the water tank is visible for several miles around these exits. An example of novelty architecture, the Peachoid is one of the most recognizable landmarks for travelers along I-85 between Charlotte, North Carolina, and Atlanta, Georgia.

According to official literature, the Peachoid boldly “sets the record straight about which state is the biggest peach producer in the South. Contrary to popular belief, it is NOT Georgia.” Without a doubt, the best-known, most photographed water tank in America. It is painted to match the kind of peaches grown in the area using 20 colors and 50 gallons of paint.

The Heart and Soul of San Antonio

The San Antonio River Walk, or Paseo del Rio, is a public park, open 365 days a year. It is a network of walkways along the banks of the San Antonio River one story beneath approximately 15 miles of downtown San Antonio. Explore by foot along the river’s walking path or jump aboard a river barge for a ride and guided tour. Lined by bars, shops, and restaurants the River Walk is an important part of the city’s urban fabric and a tourist attraction in its own right.

The River Walk winds and loops under bridges as two parallel sidewalks, lined with restaurants, shops, hotels, and more. It connects the major tourist draws from the Alamo to Rivercenter Mall, Arneson River Theatre and La Villita, the San Antonio Museum of Art, and the Pearl Brewery.

Or, shop local favorites along the river’s Museum Reach at the historic Pearl. While at Pearl, dine and drink al fresco at The Food Hall at Bottling Department. Further south, immerse yourself in history at the UNESCO World Heritage Site, San Antonio Missions National Historical Park along the Mission Reach.

Holiday Fun and Festivities at Bernheim

At 15,625 acres, Bernheim boasts the largest protected natural area in Kentucky. Bernheim contains a 600-acre arboretum with over 8,000 unique varieties of trees.

With the holidays just around the corner, the Bernheim calendar is full of events to celebrate with nature this December. Except for Christmas Day, Bernheim is open the entire month with activities for every age.

Bernheim’s Holiday Open House takes place on Saturday, December 4 from 11 a.m. to 3 p.m. at the Visitor Center. Enjoy a festive day shopping in the forest. Browse the selection of gifts, locally-made crafts, Kentucky Proud and Giants merchandise, and other unique gifts for the nature lover in your life. Get in the holiday spirit with hot mulled cider and refreshments, hourly door prize drawings, holiday specials, and a 30 percent discount for Bernheim members.

Gnomes are known the world over. Legend has it they travel and live in the forest freely, seldom seen by humans. Add some seasonal magic to your home this season by joining the Bernheim staff at one of two Forest Gnome Workshops to create this mythical forest character on Saturday, December 4 from 9:30 to 11 a.m., or from 1 to 2:30 p.m. while enjoying some hot cider, treats, and hot chocolate. Make this a family activity and enjoy building your gnome together. Children 13 and under must be accompanied by an adult.

When it comes to standing in awe of nature’s magnificence, it’s hard to beat the Grand Circle Tour—especially the northern arc that carves across southern Utah and encompasses Zion National Park at the western edge and Arches National Park to the east. Of them all, it is Zion that offers outdoor enthusiasts the most varied, seemingly otherworldly terrain. At just under 230 square miles, Zion is relatively small by national park standards, and the park’s most memorable features are found in easily accessible Zion Canyon.

Zion was carved out of the Markagunt Plateau by the Virgin River which carved down a half-mile into the sandstone as it rushed to meet up with the Colorado River exposing rock layers from the middle periods of the earth’s geological history.

The Zion Canyon Scenic Drive is accessible by shuttle bus only from March 15 to October 25 and on weekends in November. Take time to drive the beautiful Zion-Mount Carmel Highway. This 10-mile length of scenic highway sports a series of switchbacks and the Zion-Mount Carmel tunnel en route to Checkerboard Mesa and the park’s eastern entrance.

The City of Globe, Arizona’s Besh Ba Gowah Archaeological Park and Museum presents the 34th Annual Festival of Lights celebration on Saturday, December 3, from 5 to 9 p.m. The festival delights visitors with a beautiful scene, a festive combination of the Southwest holiday tradition of the luminaria lighting combined with the artistry of American Indian cultural presentations.

This year’s festival will feature 4,000 real candle luminarias illuminating the archaeological park’s partly reconstructed 800-year-old Salado culture ruins. Guests are encouraged to walk among the luminarias and experience the magic of the season. The warm glow of the luminarias creates a dramatic backdrop for cultural presentations by the internationally renowned Yellow Bird Productions.

Yellow Bird is a family dance group under the direction of Ken Duncan, a member of the San Carlos Apache Tribe. The group specializes in cultural presentations that celebrate the unique spirit of American Indians. Presentations will run periodically throughout the night until the festival concludes at 9 p.m.

The Besh Ba Gowah Museum will be open to visitors for the duration of the event and guests are welcome to view the exhibits and browse the unique items available in the gift store.

The event will also have food trucks offering a variety of delicious treats and local specialty merchandise vendors.

Admission to the event has always been free although non-perishable food donations are encouraged in support of the Gila Community Food Bank.

Since parking for the event fills up fast a free shuttle service is available. The shuttle will run every 15 minutes from 4 p.m. until the last call at 9 p.m. Shuttle parking is located at Globe High School, 437 S. High Street.

Schmeckenfest is a wassail tasting and Christmas extravaganza in La Grande, Texas. Celebrate 16 years of Schmeckenfest on Thursday, December 1 from 5-8 p.m. A true community event, it also attracts visitors to the Square to sample many different types of wassail (hot cider) made by various business owners and community leaders in which participants hope to win the coveted honor of being named Schmeckenmeister.

This small-town Christmas festival also includes music, delicious treats sold by local nonprofit organizations, a Christmas parade, the lighting of the County Christmas tree on the Courthouse lawn, children’s activities, and a visit from Santa. There are numerous Christmas card-worthy photo opportunities around the Square as well as pictures with Santa.

Always maintain a kind of summer, even in the middle of winter.