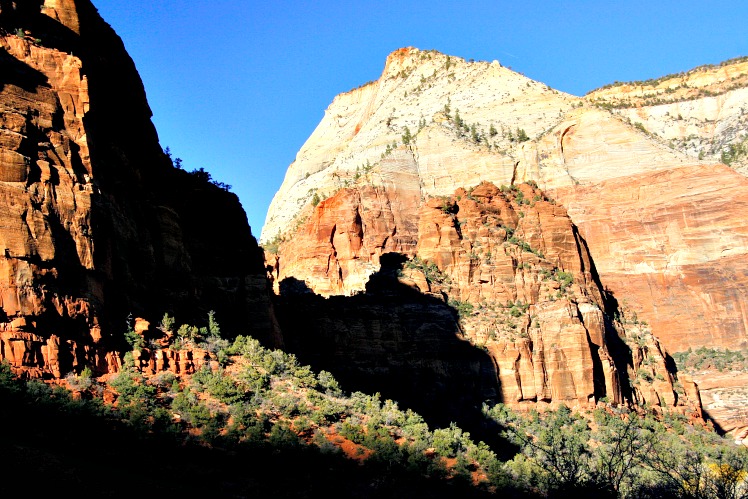 Nothing can exceed the wonderful beauty of Zion…

There is an eloquence to their forms which stirs the imagination with a singular power and kindles in the mind a glowing response.

Situated in the southwest corner of Utah, Zion National Park is one of the planet’s most unique and breathtaking settings. At the heart of the park lies Zion Canyon, a 15-mile long, 2,600-foot deep gorge that is awe-inspiring both for its size and beauty. But the colorful sandstone walls sit amid the desert, forest, and river biospheres which are rarely found in such close proximity. This makes the park a truly magical environment that never ceases to amaze and delight.

While Woodrow Wilson officially declared a national park in 1919, Zion’s history stretches back much further in time. Native Americans inhabited the region for at least 8,000 years with various tribes calling the area home over the centuries. Europeans arrived in the 1850s and ’60s ultimately displacing the Native Americans living there. Many of those early Europeans were members of the Church of Latter-Day Saints which derives a great deal of meaning from the park’s name.

In the 1860s, Mormon (Church of Latter-Day Saints) pioneers settled in southern Utah. When they arrived they thought it to be so beautiful, holy with its towering natural cathedrals made of rock that they called it Zion, a nod to Little Zion found in scripture in the Bible’s Old Testament. To them, it was a sacred dwelling. It still holds a sacred reverence to all who visit it today and it is without a doubt one of America’s most beloved national parks. Today, Zion is known for its excellent hiking, spectacular landscapes, and diversity of wildlife.

As is typical with any national park, there is plenty to see and do in Zion. For example, visitors simply looking for a scenic drive should point their car toward the Kolob Canyons where they’ll find an epic 5-mile route that has to be seen to be believed. Birdwatchers will find a lot to love here as well with more than 280 avian species to spot throughout the park. That includes the rare—but increasing in numbers—California Condor which has appeared more frequently in recent years. If you linger in Zion after dark you’ll be treated to a celestial light show unlike any other with the night sky aglow with a billion stars overhead.

Travelers looking for an adrenaline rush can take to the Virgin River which has carved out Zion’s unique landscape over the years. The water can run fast and furious at times presenting challenging rapids meant for expert paddlers. The sandstone walls of the canyon make for excellent climbing and canyoneering—particularly in the famous Zion Narrows—is also a popular way to explore the area.

If you get hungry, options for finding food inside Zion National Park are somewhat limited. The visitor center does offer a limited number of drinks and snacks, while both the Castle Dome Café and Red Rock Grill at Zion Lodge offer a full menu for any time of the day.

Zion features numerous hiking trails throughout its 146,000 acres. Many of those trails are remote and rugged so plan accordingly before setting out. That includes wearing appropriate footwear and bringing plenty of drinking water. Be prepared to be self-sufficient in the backcountry particularly if you wander into the Zion Wilderness. Backpackers planning to spend the night are also required to have a permit before venturing out. It is also important to note that the National Park Service limits the size of groups traveling together to 12 people.

Zion’s top trails are legendary amongst hikers, many of which come simply to knock a few off their adventure bucket list.

The Narrows is a challenging walk that takes trekkers 9.4 miles into the canyon following the Virgin River along the way. Meanwhile, the moderately difficult Watchman Trail runs just 3.3 miles along rocky cliff faces rewarding visitors with some of the best views in the park along the way. The Overlook Trail is just 1 mile in length but ends at a lookout point that is also breathtaking in its scope.

The park’s signature hike without a doubt is Angels Landing—a demanding 5.5-mile walk that features over 1,500 feet of elevation gain along the way. This trek is not for the faint of heart or inexperienced as there are certain sections where chains have been installed to provide handholds while crossing through the more difficult portions. Those who do complete the journey are treated to a truly spectacular view at the end that provides an amazing sense of satisfaction and accomplishment. In response to concerns about crowding and congestion on the trail, on and after April 1, 2022, everyone who hikes Angels Landing needs to have a permit.

Those looking for easier, more accessible routes should give the Lower Emerald Pool Trail a go. This paved path runs for 1.2 miles and takes visitors to a beautiful waterfall and its namesake body of water where hikers can even take a dip.

Emerald Pools is a choose-your-own-adventure area in the park with three main hikes among lush vegetation leading to different water features at each. The middle trail is a more moderate hike gaining 150 feet leading to an overlook of the pools found on the lower trail and small waterfalls, and the upper pool is a strenuous climb up 350 feet to a waterfall that streams down from a cliff.

Other options include the 1-mile-long Grotto Trail which often provides opportunities to spot wildlife and the paved Riverside Walk which offers a 2.2-mile mini-Narrows experience.

Travelers looking to spend a few days in and around Zion have several options when it comes to where they want to stay for the night. The famous Zion Lodge allows visitors to spend the night inside the park’s boundaries while still offering a comfortable setting. The Lodge offers standard rooms, cabins, and suites at varying price points and is open year-round.

Visitors to the park can also elect to camp inside its borders during their stay. There are three campgrounds found within Zion itself each with differing amenities. Lava Point Campground is the most remote and is usually only open between May and September. It is located at 7,890 feet along the Kolob Terrace where weather conditions can fluctuate rapidly. The South Campground and Watchman Campground are more accessible and have a few modern features including RV hookups and dump stations. Campsites start at $20 per night and reservations should be made through Recreation.gov.

As with most national parks and forests, backcountry camping is permitted in Zion although backpackers are urged to take caution when pitching their tent. Hikers should make camp a safe distance from water sources and out of the way of potential rockfalls. Backcountry camping is free, but a permit is required at all times.

Additionally, other overnight options can be found in the small towns that border the national park with Springdale and Rockville being the closest and most convenient. Those towns also offer a variety of restaurants for grabbing both a quick and easy meal as well as a more upscale sit-down experience.

Of particular note, if you’re traveling in an RV you’ll want to be aware of the Zion-Mount Carmel Tunnel. The 1.1-mile-long tunnel is found on State Route 9 and is the longest of its kind in the U.S. Because it is quite narrow, vehicles that are taller than 11 feet, 4 inches in height, or wider than 7 feet, 10 inches in width are required to have an escort or traffic control when passing through. There is a $15 fee for this service which is good for two trips. Vehicles that are 13 feet tall are prohibited from passing through the tunnel as are semi-trucks, vehicles longer than 40 feet, or those carrying hazardous materials.

Tips for your visit

Avoid the crowds: More than 4 million visitors flock to Zion in a given year. Most of them come between February and November with much smaller crowds in January and December. Those months may be colder and have less predictable weather so bring appropriate gear to stay warm and dry. At all times of the year, Zion Canyon is the busiest area of the park so head to Kolob Canyons or Kolob Terrace Road for more solitude.

Fees and Passes: The entrance fee for Zion National Park is $35 for a private vehicle, $30 for a motorcycle, and $20 per person on foot. These fees provided a pass that is good for seven days. A Zion annual pass can be obtained for $70 and a lifetime pass can be purchased by seniors over the age of 62 for $80. America the Beautiful Annual Pass is a great value at $80 particularly if you plan on visiting any of Utah’s other national parks, such as Bryce Canyon, Arches, Capitol Reef, or Canyonlands.

Bring Binoculars: As mentioned, Zion is a virtual paradise for birdwatchers but there are plenty of other creatures to see as well. The park is home to bighorn sheep, mule deer, bobcats, mountain lions, porcupines, foxes, and the elusive ringtail cat. Carrying a pair of binoculars will make it easier to spot these creatures throughout your stay.

Check Trail Closures: Before planning a specific hike in Zion, be sure to check the park’s website or the visitor center for closures. Rockslides and high water are common at times both of which can temporarily close a trail down.

How the park got its name: The parkland that we now call Zion was occupied by the Anasazi people and Paiute Indians until the 1860s when a Mormon settler named Isaac Behunin came to the area. About the heavenly place, he remarked: “These great mountains are natural temples of God. We can worship here as well as in the man-made temples in Zion, the biblical heavenly ‘City of God.'” A short time later, Mormon leader Brigham Young came to the area and didn’t agree with the naming convention so the park began to be referred to as “Not Zion” or “Little Zion.” In any event, the name Zion took. In 1909 President William Howard Taft set aside Zion as a National Monument under the name “Mukuntuweap National Monument.” About a decade later, the acting director of the National Park Service reclaimed the name given to it by Mormon pioneers, Zion.

Zion National Park lies at the convergence of Great Basin, the Colorado Plateau, and the Mojave Desert (the Grand Canyon and Joshua Tree also sit on Mojave.)

In 2000, the Zion Shuttle system was implemented, reducing congestion at the most popular places in the park making it easier for all of us to get around.

It is a place where a family can rest at streamside after a pleasant morning hike.

It is a vast labyrinth of narrow canyons where one can become hopelessly lost, shrinking to invisibility beneath dark, towering walls of stone.

One may feel triumph and exhilaration, or awesome smallness atop Angels Landing; thirst and fatigue, or a rewarding weariness, on the return trek from the backcountry.

Perhaps one’s view of Zion is in the eyes of the beholder.