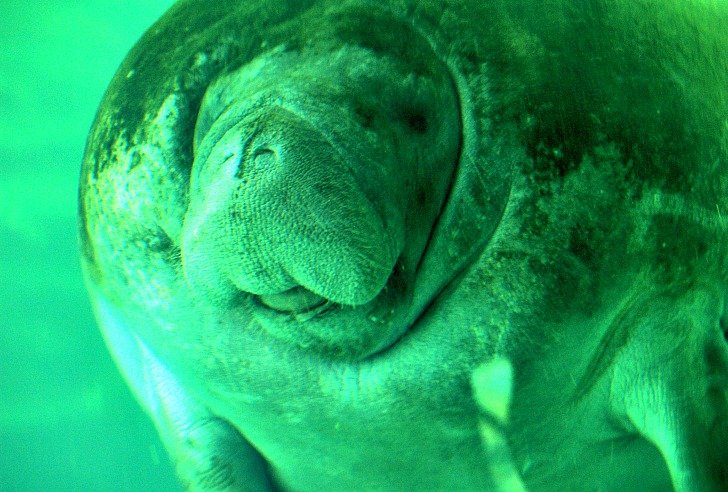 Traveling at speeds of up to 60 miles per hour across the sagebrush country, pronghorn is the fastest land mammal in North America. Although pronghorn are not as fast as cheetahs, they can maintain a fast speed for a longer period of time than cheetahs.

Pronghorns are generally reddish-tan in color with white patches on the chest, neck, underbelly, and rear-end. Pronghorn have large eyes and fantastic vision. Their large eyes can spot predators from very far away which is helpful on their flat grassland habitat. Both males and females can have horns although female horns are much smaller reaching only 4 inches in length whereas male horns can be as long as 20 inches.

Sagebrush leaves are an important source of food and water for most pronghorns particularly in winter. They are plant eaters feeding on flowering plants, cacti, and grasses.

Their natural range extended from southern Canada to northern Mexico. Today pronghorns are mainly found in the United States in the Great Plains, Wyoming, Montana, northeast California, southeast Oregon, Nevada, Utah, Colorado, Arizona, and New Mexico and in Canada in southern Alberta. Some of the highest numbers of pronghorn are in Wyoming in the Red Desert and Yellowstone ecosystems. Pronghorn like open plains, fields, grasslands, brush, deserts, and basins. Between the summer and winter, pronghorn migrate between feeding grounds to survive the harsh winter.

INSIDER TIP: On a clear day, you will be able to spot pronghorn in herds along the highway. However, with their light-brown coloring, they blend very easily with the landscape.

2 of 5: Bison or American Buffalo

Custer State Park is South Dakota’s first and largest state park. It spans over 71,000 acres all around the Black Hills area. Custer State Park is also home to one of the largest bison herds in North America and is the best place to spot these animals outside of Yellowstone National Park.

Through the early 1700s and1800s, bison were hunted to near extinction by the white settlers. But over the past century, bison reintroduction programs—like the one in Custer State Park—have paid off. Now the herd in the park is around 1,300-1,400 strong and they are visible all year round. But springtime is super special because it brings cute baby bison into the mix. The annual Custer State Park Buffalo Roundup (September 23-25 in 2021) is a popular event. Watch cowboys and cowgirls as they round up and drive the herd.

INSIDER TIP: The number of bison at Elk Island National Park fluctuates year-to-year; there are generally around 400 plains bison and 300 wood bison.

Prairie dogs are closely related to the common ground squirrels and chipmunks both of which live in areas around Badlands National Park and the Great Plains of the West. The prairie dog species found in the Badlands is the black-tailed prairie dog which also happens to be the most common prairie dog species overall. Prairie dogs tend to be around 14-17 inches in length and weigh 1-3 pounds each. Some of their bodily adaptations have made them excellent at what they do. Their short, strong arms and long-nailed toes help them to dig burrows. Although their legs are short, prairie dogs can run up to 35 mph at short distances to escape predators for the safety of their burrows.

Prairie dogs live in underground colonies sometimes referred to as “towns”. Prairie dogs build their homes underground to protect against larger predators like hawks and coyotes as well as to protect their homes from flash flooding. One unique aspect of prairie dog life is communication. You can often hear them “talking” to each other via barks, squeaks, or yips. They use this method of communication to warn each other about the dangers and predators around.

INSIDER TIP: Because prairie dogs are so small compared to some of the larger animals in the area, they tend to get overlooked easily. Your best bet is to pull over onto one of the shoulder outlooks and just watch the landscape for any movement in the burrows.

Those of us who have experienced any kind of animal migration event know it is an experience of a lifetime. While Nebraska might not seem a likely place to see a migration event, it is home to one of the most epic bird migrations on the continent. And sitting in a bird blind with small cutout windows with just enough space for binoculars and cameras is the best way to watch the majestic sandhill cranes during their annual migration. These cranes can be found by the millions along the Platte River near Kearney, Nebraska.

During the day, thousands of birds forage for food in the cornfields around Gibbon and at night they roost along the Platter River. Cranes are elegant in the way they dance among each other. And the moment they take flight in unison is simply breathtaking. Once you have experienced this, you might find yourself making the annual trip to Gibbon just to see them again.

INSIDER TIP: The best place to see sandhill cranes along their migration route is along the Platte River about 20 miles east of Kearney, Nebraska along I-80. And the best time to visit is March to Mid-April during sunrise or just before sunset.

WHERE: Along the Florida Coast

Manatees are one of the most popular marine life attractions in Florida and people travel from all over the world to see them in the wild. Known as gentle sea cows, manatees roam the waters of Florida from April through October. And when the temperature drops, they head to places with fresh water where temperatures are constant year-round. Manatees need waters of around 70 degrees to survive (and thrive).

Citrus County which is along Florida’s Gulf Coast north of Tampa is the world’s largest natural winter refuge for manatees. Manatees are attracted to the area because of the abundance of freshwater springs. Citrus County has many observation points to safely see these animals and it is also one of the few locations in Florida where you can legally observe manatees within the water. So, swimming with manatees is a popular activity here.

INSIDER TIP: The manatee is one of Florida’s most iconic symbols and wintertime is the best time to see them. When the temperatures dip, manatees gather in springs and the warm-water outflows of power plants in large numbers.

A key post in the defense system of western Texas, Fort Davis played a major role in the history of the Southwest 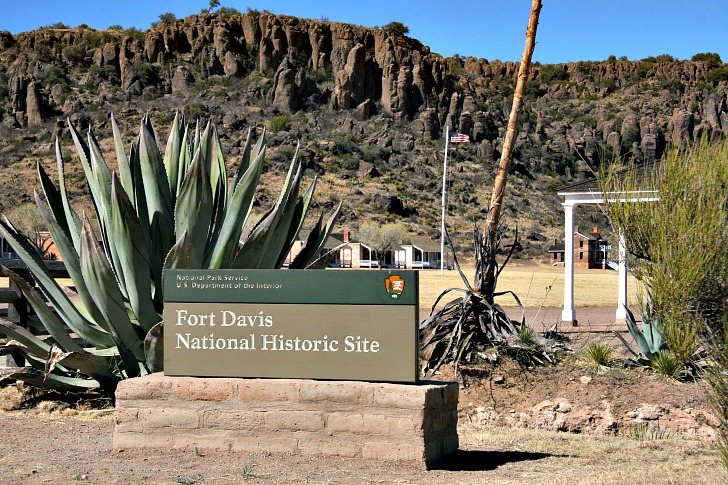 Set in the rugged beauty of the Davis Mountains of West Texas, Fort Davis is the best surviving example of an Indian Wars frontier military post and one of the best preserved Buffalo Soldier forts in the Southwest. Fort Davis was strategically located to protect emigrants, mail coaches, and freight wagons on the Trans-Pecos portion of the San Antonio-El Paso Road and the Chihuahua Trail, and to control activities on the southern stem of the Great Comanche and Mescalero Apache war trails.

Fort Davis is important in understanding the presence of African Americans in the West and in the frontier military; the 24th and 25th U.S. Infantry and the 9th and 10th U.S. Cavalry, all-black regiments established after the Civil War, were stationed at the post. When not chasing renegade bands of Apache or bandits, the soldiers helped build roads and telegraph lines.

The soldiers, most of whom were former slaves from southern plantations, worked long, hard hours for little pay and marginal living conditions, yet they had excellent morale. The black regiments had fewer problems with alcoholism and desertion than the army did overall. They took part in most of the major military expeditions on the Texas frontier and earned a reputation as good soldiers among whites and Native Americans.

The Apaches and Comanches called them Buffalo Soldiers because of their skin color. Despite their notable military accomplishments on the Texas frontier, black soldiers didn’t serve alongside white soldiers again until the Second World War.

Fort Davis doesn’t look like the Western forts depicted in Western movies. Instead of log walls, it was surrounded by the cliffs of a box canyon on three sides. Fort Davis National Historic Site on the edge of Fort Davis looks pretty impressive from the heights of the Scenic Overlook Trail. From this advantage, you can hear the recorded bugle call from the visitor center in the valley below while Sleeping Lion Mountain stands guard on the horizon.

Soldiers occupied the fort from 1854 to 1891. From 1867 to 1885, Fort Davis was Regimental Head­quar­ters for the four Buffalo Soldier regiments serving in the West. After the military left, civilians moved into many of the buildings. The new occupants helped preserve the officers’ quarters, hospital, and enlisted men’s barracks.

Today, twenty-four roofed buildings and over 100 ruins and foundations are part of Fort Davis National Historic Site. The site is well maintained and thoughtfully restored with interpretive and historical displays, an excellent book shop, and a museum. Five of the historic buildings have been refurnished to the 1880s, making it easy for visitors to envision themselves being at the fort at the height of its development.

Three hiking trails climb from the Fort, with two links to the hiking trail at Davis Mountains State Park. Small plaques explain natural features and their value to the Fort when it was active.

Fort Davis National Historic Site symbolizes the era of westward migration and the essence of the late 19th century U. S. Army. It is a vivid reminder of the significant role played by the military in the settlement and development of the western frontier.

Fort Davis National Historic Site is on the northern edge of the town of Fort Davis. The site opens daily from 8am to 5pm. The $10 per person (or $20 per vehicle) admission fee helps maintain the interpretative programs and four miles of hiking trails.