When visiting, be sure to see the chapel which has been fully restored 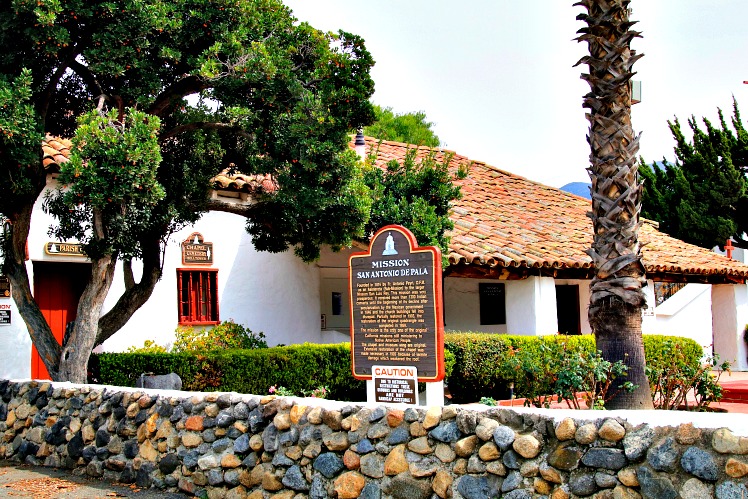 Starting in 1769, Spain built a chain of 21 missions across the length of Alta California—from San Diego to Sonoma—as a way of gaining a foothold in the new frontier. California’s mission era ended in 1834 but you can still see the architectural legacy that endures in the state’s red tile roofs, whitewashed walls, arched colonnades, and bell towers.

The missions were built approximately 30 miles apart—about a day’s journey by horseback—covering 650 miles total. All 21 missions are open to visitors and feature a gift shop and museum and most of them hold mass on Sundays (or even daily).

Old Mission San Luis Rey de Francia is the 18th in a chain of 21 California missions. It was established in 1798 by Father Fermin Lausen who was president of missions during that era.

Located in present-day Oceanside, the mission was named for Louis IX, king of France. The main church was designed and constructed in the shape of a cross. Its impressive architecture combined Spanish, Moorish, and Mexican influence. All the buildings were arranged around a 500 by 500 foot quadrangle, nearly the size of two football fields.

Mission San Luis Rey was one of the largest outposts stretching over 1,000 square miles in what is now San Diego and Riverside counties. This outpost provided support for the mission and also allowed baptized Indians to remain in their native villages and serve the mission by working on the ranchos.

Within two short years, the quadrangle was complete, two granaries were built, and two apartments were built, one for men and boys and one for women and girls. By 1818, a small town had began. Father Peyri had an aqueduct built to supply water to the mission. By 1821, the mission only lacked a resident priest to make the asistencia a full mission. Mission Pala had reached its peak prosperity by 1827.

Three mission asistencias were built in the San Diego district. Mission Pala is still in active service and is the only Mission to have remained in continuous service as was originally established ministering a native population.

The Asistencia was named in honor of Saint Anthony of Padua, nicknamed the “Wonderworker of the world.” Pala continues to be an active Church.

The bell tower is striking in that it is detached from the building, unusual in the mission system. It is modeled on a tower in Ciudad Juarez, Mexico. The two bells were cast in Mexico. The larger is dedicated to St. Francis, St. Luis the King, St. Clare, and St. Eulalia. The maker of the bell is named as Cervantes. The smaller bell is dedicated to Jesus and Mary.

Step back from the tower and look carefully at the top of the tower. There you will see a small cactus plant growing by the base of the cross. It is said that upon completion of the Asistencia, Padre Peyri climbed the tower and planted a cactus to symbolize Christ conquering the desert (both in California and the human heart and soul).

There is a courtyard in front of the church entrance.

Across the street from the Asistencia is a park.

Inside the Church you will find the original floor and outstanding Indian art. The chapel here is much smaller than the typical mission chapel and it uses a lot of large wood beams which you do not see as often in the other missions. The chapel can still hold a decent amount of people though and it is working chapel for Mass on the weekends. The altar is relatively plain but beautiful in its simplicity and the walls are covered in a fading pattern.

Behind the bell tower is the cemetery for both Indians and people who lived and worked at the mission. It is the original cemetery for the Asistencia and contains the remains of hundreds of Indian converts and early California settlers. It is still in use as evidenced by some of the current dates on the headstones.

Walking through the cemetery and out the back to the main church office offers an interesting view on cultural differences. In front of the office you will find a statue of St. Anthony of Padua; but unlike many such statues you see at other churches and missions, this one depicts St. Anthony as a person of color. Around the front, there is a bell post that signifies this spot as a mission on the El Camino Real Trail.

It took about 20 minutes to walk around this mission and see it. I wouldn’t say you should plan a trip just around visiting this mission but if you are in the area then it is worth stopping by as it is interesting and historic.

Pala Casino RV Resort is reason enough to be in the area with 100 large full-service sites with grass lawns and picnic tables. Temecula and Temecula Valley wineries are 22 miles to the north. Here you can taste and tour through nearly 50 wineries, stroll the boardwalks of historic Old Town, shop Promenade Temecula or the local farmers’ markets, and play a round of golf.