The home of the Watermelon Thump is rich in history, barbecue, and parks 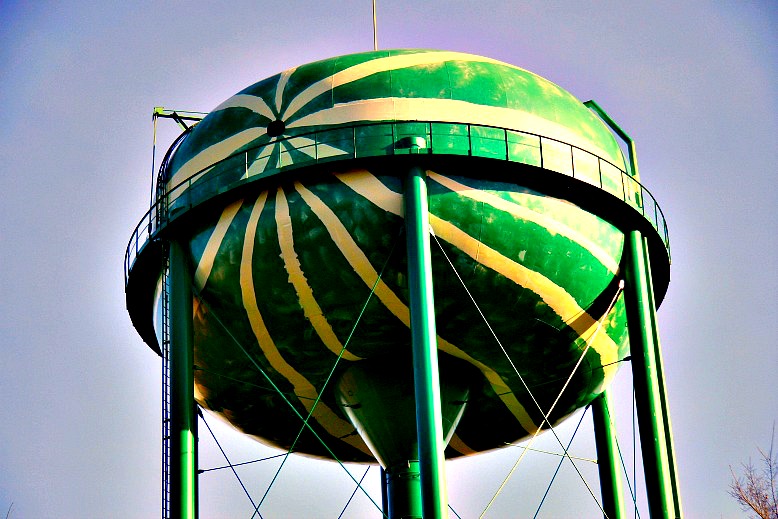 Those traveling on Interstate 10 through Texas may know Luling only as a favored Buc-ee’s pit stop on the highway. But for this Winter Texan, Luling offers a glimpse of the slow pace and friendliness of small-town life.

A stop in Luling is a favored stop when heading east or west on I-10 between Houston and San Antonio. Each time I see that big watermelon water tower, I long to stay a spell. My love of small-town life never waned and now I’m heading to Luling with time to linger for a while!

The WatermelonThump.com website counter ticks off the days until the annual Thump. It was June 24-27 this year after a cancellation due to the pandemic in 2020. It all started back in 1954 when a Luling principal offered up an idea to promote the Luling watermelon crop. A local high school student won a contest with a name for the event that conjures up fun: the Thump. The Thump now draws 30,000 visitors to 5,500-resident Luling each year.

How do you thump a watermelon, anyway? The name comes from the practice of hitting (thumping) the watermelon to listen to the sound for juicy ripeness.

As for the capital “T” Thump, there are too many activities to name. The newly crowned Thump Queen presides over the big parade. Other highlights of the four days of activities include a carnival, concert/dances, food booths, beer garden, children’s entertainment, and a marketplace. There are seed-spitting and melon-eating contests and an auction of the biggest melons weighing in at up to 80 pounds. People eat dripping slices of melon and fan themselves on benches, passing the time of day while wildly laughing children run around like it wasn’t boiling hot, chunking watermelon rinds at each other.

The history of the town itself began in 1874 as the far western stop of the Sunset Branch of the Southern Pacific Railroad and gathering place for cattle-driving cowboys on the Chisholm Trail. Those hooligans were so unruly that Luling became known as “the toughest town in Texas” until the drives ended in the 1880s. Luling was a quiet cotton town until oil was discovered.

In 1922 Edgar B. Davis brought in Rafael Rios #1 which proved to be part of one of the most significant oil fields ever discovered in the state. Perhaps his greatest legacy was the discovery of the Edwards Lime. It set off vigorous exploration to find the lucrative shallow production.

Almost overnight, Luling was transformed from a railroad town of 500 to an oil town of 5,000. Tents filled every vacant area with roughnecks and their families. “Rag Town” as they called it came with every kind of good and bad-makeshift saloons, restaurants, and even a shooting gallery as entertainment.

Work was hard and living even harder but the dream that unfolded was a microcosm of Texas history. It was a time when a community of farmers and their families responded to the coming of the railroad only to have their lives changed forever by the discovery of oil. By 1924, the oilfield was pumping 11 million barrels of oil annually.

To acknowledge and embrace the importance of oil to the Luling economy, the town’s pumpjacks are painted with all kinds of characters including a cow jumping over the moon and a little girl eating—what else?—a watermelon.

Though the oil industry’s importance has faded in this crossroads town, Luling is more vibrant than ever. Luling Main Street is a community group that seeks to revitalize Davis Street and the downtown area with parks, signage, facade design, murals, planters, and decorative crosswalks.

The highlight of my visit to the charming shops along Davis Street began by following my nose to the original City Market BBQ. I’m thrilled to see no long line for this legendary joint and hurry on back to the pit room to place my order. They keep it nice and simple: brisket, ribs, and sausage. That’s it.

Soon my brown bag is stuffed with smoky pork ribs and fall-apart brisket (with a huge burnt end, to my delight), a whole dill pickle, a big slice of onion, and sweet pickles/cauliflower from the big jar. The sausage “links” are each their own little tasty ring. I don’t often categorize barbecue as “adorable,” but these sausage bracelets fit that description.

Each of Texas’ famed barbecue places has its own customs. Try not to look like a newbie and just follow along. At City Market, you pay for your to-go meat in the back then return to the front counter to buy sauce, beans, or a few other items. For some, it’s all about the sauce and City Market offers the orange vinegary kind, not too sweet. Best of all, the price for the whole feast is about half of what I paid at an inferior place in Katy only a week earlier.

The San Marcos River runs through Luling and its history. Early settlers harnessed the river’s power by building several mills along it to run the community’s gristmill. The Zedler Mill is the last surviving one, built in 1874 by three men from Tennessee who added a cotton gin and water wheel (to power their machine shop) to the stone dam. It was purchased by the Zedler family and other investors in 1885; Zedler bought out his partners in 1888.

Modernizations happened through the years but as late as the 1950s, the mill was still turning out chicken feed for livestock and fine cornmeal for Luling’s dinner tables. But the mill shut down soon after and fell into disrepair.

Around 2002, Luling bought the property; the Zedler Mill Foundation and the city invested more than $1.5 million to improve and restore the mill buildings in a new city park. Today the park is a beautiful site for family outings and fun in the water. The Texas Parks and Wildlife Department and partners put together the Zedler Mill Paddling Trail along with the two- to four-hour trip. Examine the inventive mill components and marvel at how they used the power of the river so effectively long ago.

A mere 8 miles southeast of Luling but still along the San Marcos River lies a tropical treasure of a state park, Palmetto. After you pass the aforementioned Buc-ee’s (pick up some trail snacks), drive past it a mile or two until you see the brown sign for Palmetto State Park. Roll down the windows to enjoy the cool-down as the two-lane road winds under shade trees that intertwine across the top, forming a canopy.

Don’t be puzzled by the signs of non-park life when you emerge from the shade—you’ll soon see park signage directing you to headquarters, the fishing dock, campgrounds, and a variety of trails. Everything looks so photo-worthy. If you’re looking for more than just a day trip extends your retreat with a night or two of camping or a stay in the park’s quaint cabin.

The first thing I look for at a park is a trail to hike and the winding, well-manicured trails at Palmetto State Park offer plenty to see. The Ottine Swamp Trail and Palmetto Interpretive Trail have boardwalks and bridges so you can wind through swamps filled with the park’s namesake dwarf palmettos. You’ll feel as if you’re in a tropical paradise.

Imagine a Texas swamp fed by warm mineral springs and occasional river flooding that provides a home to unique plant and animal life some seen almost nowhere else in Texas. Riotous birdsong is Palmetto’s soundtrack. The 270-acre park has attracted 240 species of birds, including an invasion of hummingbirds each spring. In the fall, look for butterflies everywhere. Fox squirrels and a variety of wildlife inhabit the park due to the presence of the river nearby.

The park is graced by the presence of Civilian Conservation Corps (CCC) buildings including a refectory made of sandstone that seems to rise out of the ground and once had a thatched palm roof. A water tower on the park’s interpretive trail was unique for its time supplying fresh water to all the campsites.

And, of course, everywhere you look is the park’s namesake plants adding a tropical feeling, unlike the surrounding Texas countryside. Dwarf palmetto (Sabal minor) plants from which the park gets its name surround the park’s swamp. These palmettos grow in East and Southeast Texas as well as the Palmetto State (South Carolina) and much of the southeastern US. The state park boasts the westernmost stand of dwarf palmettos in the country.
I have a feeling this won’t be the last time I linger in Luling rather than just passing through.

I didn’t drive eleven hours across the state of Texas to watch my cholesterol.