You will find it all in Yuma 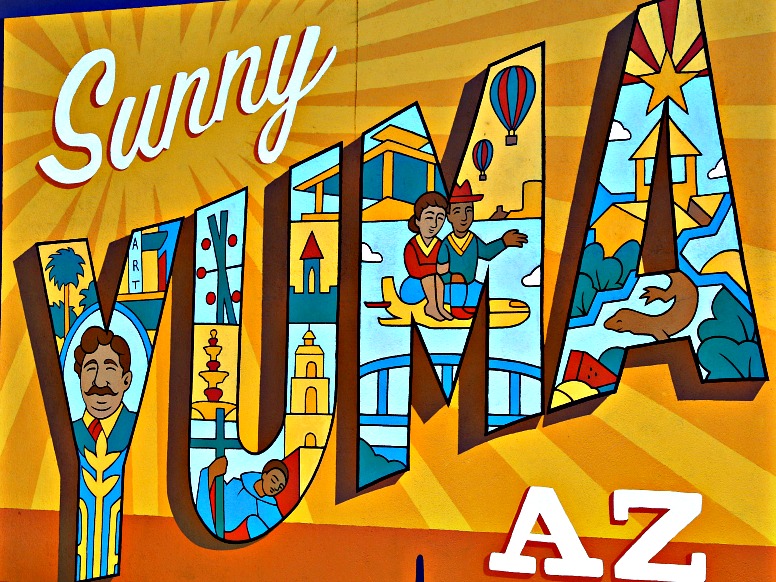 On the banks of the Colorado River, Yuma is tucked in Arizona’s southwest corner and shares borders with California and Mexico. About halfway between San Diego and Tucson, Yuma is a great destination for RVing snowbirds. Whether you’re a history buff or have a curious interest in how Yuma became the Gateway of the Great Southwest, we’ve got a list to help you get to some of the area’s top attractions.

Get Locked Up — Fans of Travel Channel’s Ghost Adventures know it as “Hell Hole Prison” for the dark and twisted tales which linger long after the last inmates occupied this first prison of the Arizona Territory. For many others, the 1957 and 2007 films “3:10 to Yuma” are what bring this “Hell Hole Prison” to mind and, today, Yuma Territorial Prison State Historic Park is open, welcoming convicts of another kind. Turn yourself in for a fascinating experience, which includes a look into “The Dark Cell” and a look back at the men AND women who served hard time in Yuma. Parole include with the price of admission. For more information, click here.

A River Runs Through It — Yuma’s storied history as a Colorado River crossing point is only scratching the surface. The Yuma Quartermaster Depot was a U.S. Army supply distribution point for forts throughout the American Southwest, established in the 1860s. Believe it or not, steam wheel boats came up the Colorado River from the Gulf of California to drop those supplies off, making Yuma the ideal point along the river to get goods to personnel, until the Southern Pacific Railroad was finalized in the 1870s. Today, Colorado River State Historic Park preserves the history of the facility while providing more information about Yuma as a Colorado River community and the engineering behind one of its impressive canal systems. For more information, click here.

The Jewel of Historic Yuma — As with so many stories about Yuma’s past, it isn’t just about the where or the what, but also who. E.F. Sanguinetti was a man who helped transform the economy of Yuma with his business acumen heading into and through the start of the 20th century. The Sanguinetti House and Gardens stands to honor his contributions and provide a deeper look into Yuma’s past.

All Aboard! — The very first train to enter into Arizona did so at Yuma, crossing over the Colorado River from California in 1877. And, although that original crossing point no longer exists, a 1907 Baldwin locomotive sits on the very spot where the tracks entered town. At the Pivot Point Interpretive Plaza, visitors will find a revitalized park adorned with plaques detailing the railroad, the nearby tribal communities, and river history.

Get Lost Looking at Stuff — You’ve seen the shows on television of “pickers” visiting vast collections of stuff, oftentimes many decades old. At the Cloud Museum, you’ll find one of those places neatly organized into an outdoor display of vintage cars, trucks, tractors, power tools, hand tools, household equipment, boat engines, wheels, and items from local businesses. The Museum, located just north of Yuma in Bard, California, is nearly 30 years of stuff assembled by its owner Johnny Cloud.

On the Town — At the end of the Gila Trail, Main Street has always been the heart of “old Yuma.” In 1849, more than 60,000 California-bound gold-seekers followed this path to the rope ferry across the Colorado River. But being so close to the river, downtown often flooded and its adobe buildings melted back into mud. Because the last “big one” was in 1916, most Main Street buildings now date from the 1920s.

Fruit of Kings — A food tour will enhance any visit to Yuma. The Yuma area now totals about 10 million pounds of Medjool dates a year, a $30 to $35 million dollar industry that employs more than 2,000 people annually. Since Yuma is a top producers of gourmet Medjools be sure to take a tour at Martha’s Gardens. After the tour ends, you’ll return to the farm store for samples and a delicious date milkshake, and we simply had to purchase a box of jumbo dates.

We’re Nuts about You! — The Peanut Patch has become a rich tradition in Southwest Arizona. A trip to Yuma simply would not be complete without stopping by for a visit. You will be a welcome guest of the George family. Inside the store are hundreds of different candies and natural snacks that, when combined make great gift baskets, boxes, and tins suitable for any gift-giving occasions. Free tours are available.