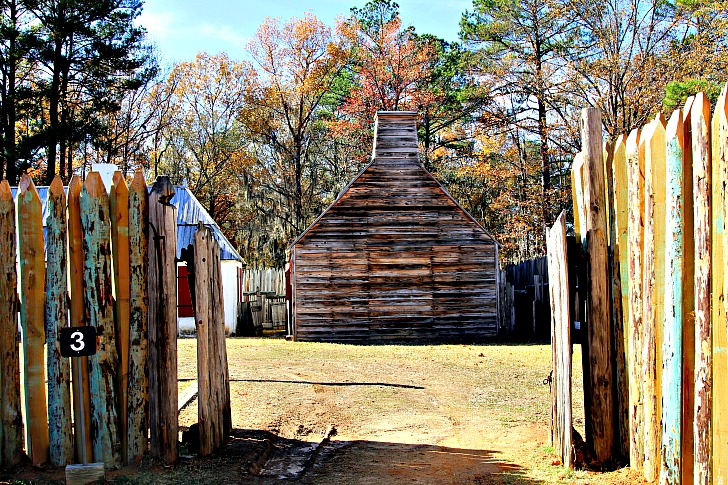 Good morning on the last day of May. Or is it June? Are we in 2022 yet? What is time? Honestly, the only thing we know is that it’s Saturday. Have a great weekend everyone—thanks as always for reading.

Located just south of Wetumpka on a forested bluff where the Coosa and Tallapoosa rivers meet to form the headwaters of the Alabama River, we enjoyed 165 acres of living history and natural beauty. The park showcases recreated Creek Indian houses, a 1751 French fort, the partially restored 1814 American Fort Jackson, a nature trail, and a campground. This historic site is operated by the Alabama Historical Commission.

After paying our $2/person admission fee, our first stop was the early 19th-century Graves House Visitor Center. Restored to its original appearance, the building now houses a small gift shop and museum.

Creek Indian houses represent two primary types of domestic structures used in the historic period. The fully enclosed buildings are winter houses and the open structure is for summer use. Until 1763, the lands within the park boundaries were home to the Alabama. This tribe was a member of the Creek Confederacy and eventually left with the French at the end of the Seven Years War (French and Indian War). The state of Alabama was named after this tribe.

In 1717, when this region was part of French Louisiana, the French built a fort near the strategically vital junction where the Tallapoosa and Coosa Rivers form the Alabama River. The fort was primarily a trading post where Indians exchanged fur pelts for guns and household items. There were no battles at the post as French diplomacy forged allies with the natives. The surrounding Indians wanted peace so they could trade with both the French and British.

We wandered Fort Toulouse, a re-creation of the last or 3rd French fort built between 1749 and 1751. A National Historic Landmark, the outside walls are constructed of split timbers that were not strong enough to stop a cannon shot but were ample protection against musket fire. Fences enclose the sides and rear of the building. On the inside, posts sunk into the ground were joined with mortise and tenon joints. There were two barracks in the fort each had four rooms for use by the troops. Along the southern wall is an igloo-shaped bread oven.

The French lost the French and Indian War and the fort in 1763. The site was abandoned by the French and the lands reverted to native occupation. Few vestiges of the French post were visible when a new large earthen fort was erected in 1814 and named by General Thomas Pinckney for his subordinate General Andrew Jackson.

Following the French abandonment of Fort Toulouse in 1763 at the end of the French and Indian War, the river valley was peaceful as first the British and then the American nations claimed the region but few white men came to the area. Relations between the white settlers and Native peoples deteriorated in the first decade of the Nineteenth Century. The U. S. and Great Britain were at odds and by late 1813 the Creek War and the War of 1812 were underway.

Fort Jackson had a moat that was seven feet deep and dirt walls ranging in height from 7 ½ feet to 9 feet high. When finished the fort contained barracks space to house 200 soldiers. A garrison was kept here as the focus of these armies changed to the war with the British and activities occurring on the Gulf Coast. During this time thousands of troops passed through the site on their way south.

In August of 1814, the Treaty of Fort Jackson was signed officially ending the Creek War. The Creeks agreed to give the U. S. more than twenty million acres as reparations for the war. This land was the majority of what became the State of Alabama.

The one-mile-long William Bartram Nature Trail winds along the ridgeline and river bottoms at the southern end of the park. Of particular note along its path is a marker dedicated to Sergeant Jean Louis Fontenot who served at Fort Toulouse from 1735 to 1754. Next, we saw a cemetery just off the trail. Only one marker remains. There is also a marker dedicated to William Bartram, the famous naturalist who passed through this area in 1775, further down the trail. The nature trail offers wonderful bird-watching opportunities. During the spring and fall, migrants are present thought out the site.

A 39 site RV campground overlooks the Coosa River. Each site includes an electric and water hook-up, a grill, and a concrete picnic table. There is a centrally located shower and bathhouse, plus a refuse facility at the campground entrance. Current RV Rates are $20.00/night; $18.00/night for seniors age 65+ and active or retired military with ID.