Every drop of Shiner is brewed in Shiner 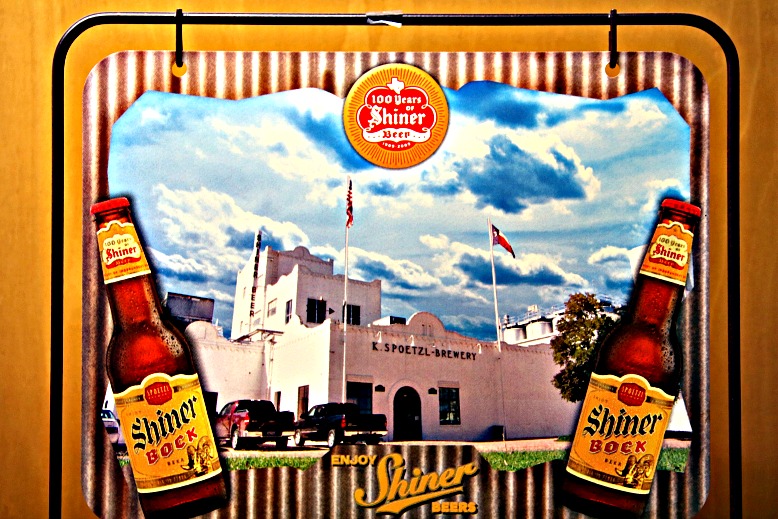 South of Flatonia and Moulton on Highway 95 lay a magical land where beer is made—Shiner. To that place two thirsty companions and a designated driver traveled.

But the first grumblings of hunger appeared as we approached the little village of Moulton. It was hard to believe the locals when we were told that one of the best restaurants around was Klosel’s Steakhouse. After some hesitation, we stopped for lunch en route to the little brewery in Shiner and gave it a shot and what a pleasant surprise. The food was truly amazing and good value. Great atmosphere and friendly service! We have eaten here numerous times over the years and have always been impressed with their food and staff. Particularly love their chicken fried steak—and desert.

The Brewery is on the right as you enter town—you can’t miss it. The best time to go is during the week when the Spoetzel Brewery comes to life. My fellow pilgrims that day were Winter Texans like myself.

The Spoetzel Brewery, founded in 1909, brews Shiner Beer with the pure artesian water that’s flowed beneath the ground there for centuries.

In 1909 the residents of Shiner, Texas, didn’t strike gold. They struck water. And shortly thereafter they learned that they could turn that water into some pretty tasty beer. Today, they still brew every drop of Shiner with the same pure artesian well water that’s wet the town’s whistle for more than a hundred years. They say some things never change, to which we say “Prosit!”

Decisions! Decisions! At the time of our previous trip the brewery gave each visitor tokens (wooden nickels) for four complimentary beers. Well, they weren’t quite full beers. They’re more like six ounces but they’re nice for trying new flavors. During our most recent visit they charged a small $5 fee. Just happened to have unused tokens in my pocket from previous visits to which we said “Prosit!”

And there is something deeply satisfying about drinking Shiner from the tap knowing it was brewed less than 100 yards away. Prosit! That’s what ought to come out of your mouth before the refreshing goodness that is a free beer goes into it. It’s a toast that means “good health.”

I started out with Shiner’s new rose ale. It tasted like someone poured a Shiner in a glass that had a little red wine left in it. But it wasn’t bad. The next three were White Wing, Fresh Hop IPA, and Prickly Pear. The brewery recently introduced a new beer to the market, a Belgian white named, appropriately, White Wing. Brewed with orange peel and coriander, White Wing replaces Shiner Hefeweizen as a permanent, year-round option.

The original tin brewery was founded in the center of an Austrian, German, and Czech farming community near the railroad tracks on the banks of Boggy Creek. A group of Shiner businessmen interested in appealing to new Bohemian settlers established the original stock company known as the Shiner Brewing Association in 1909. After a few years of disappointing results they hired Spoetzl who purchased the brewery in 1915. With Prohibition, Spoetzl turned to producing ice and “near beer.”

You can’t have Shiner without Bock. Spoetzl releases three year-round brands, about eight seasonal, and four Brewer’s Pride beers every year. Bock remains a favorite. Brewed since 1913, the flagship brand began as a seasonal brewed for spring then became a year-round offering in 1973. Shiner Bock now accounts for over 80 percent of the total Shiner volume.

After our visit to the Spoetzl Brewery we stopped for dessert at Friday’s Fried Chicken. Don’t let the name throw you off. They have a full menu and a bakery. Friday’s named after the Patek family (Patek means “Friday” in Czech), offers some of the best fried chicken south of the Colorado River—along with those Bohemian delicacies known as rosettes, kolaches, and a variety of delicious pies including pecan. I saw several customers with full meals on their table ranging from chicken to beef to salads. Friday’s Fried Chicken is about a half mile from the brewery on the left as you head into town.

On the way out of town we stopped by Saints Cyril and Methodius Catholic Church, a towering cathedral that has anchored Shiner since 1921. Boasting a Romanesque revival style of architecture and stunning stained glass windows imported from Germany with a magnificent mural of Christ in the Garden of Gethsemane and an imposing square tower, the church is on the National Register of Historic Places.

For a quart of ale is a meal for a king.