In defense of the fruitcake 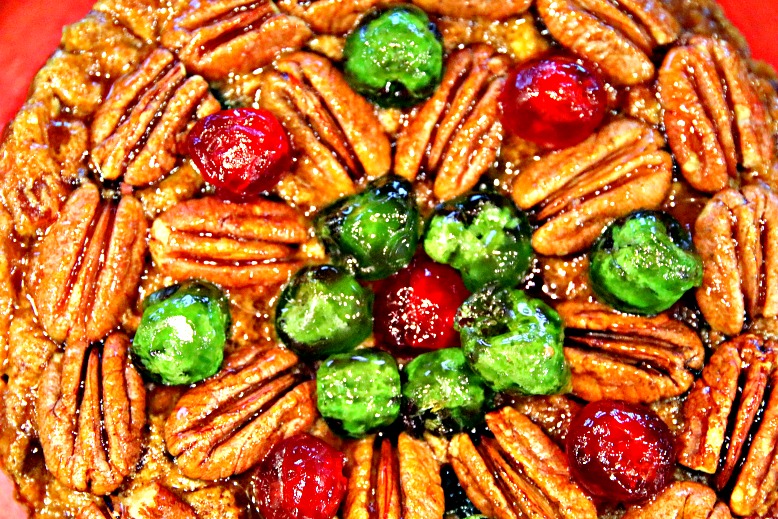 We all know what a fruitcake is, or at least we think we do. Culturally, it’s become a holiday punch line, the subject of a joke that is repackaged every Christmas. The food has seen ridicule the better half of a century but few people under 40 have even tried a fruitcake much less hated the taste enough to inspire such seasonal scorn.

It’s hard to pinpoint the exact moment fruitcake became a parody but many refer to a certain talk show as ground zero of its downfall. Johnny Carson famously quipped, “The worst Christmas gift is fruitcake… There is only one fruitcake in the entire world and people keep sending it to each other, year after year.” This single joke evolved into a Tonight Show holiday tradition of ripping on fruitcake, year after year.

Since Carson’s joke happened in the ’60s, I needed to dig deeper. I needed to sink my teeth into the fruitcake’s mystique. Much of the resentment towards fruitcake stems from what Americans have come to believe it is. What we envision as fruitcake is a quickly assembled, cheaply constructed facsimile. Basing all your fruitcake hate on these assembly-line counterfeits is like saying you don’t like hamburgers because you aren’t a fan of McDonald’s. This is the problem.

Conventional fruitcake really does suck. Like a tasteless brick of cake. But, made correctly with choice ingredients, fruitcakes are flavorful and moist. Mass-produced fruitcakes, the kind that most people are exposed to during the holidays, are nothing like what a fruitcake should be. A fruitcake should be rich, it should taste like dried fruit and nuts and spices. It should have a moist texture—it’s not supposed to be dry and crusty.

The practical definition of a “fruitcake” isn’t particularly obvious or apparent. A fruitcake is composed of a bread base, dried or candied fruit, and nuts. It can have myriad spices and flavorings but as long as it’s composed of those three essentials, it is a fruitcake. Shape—whether it’s a log, a bundt-cake situation, or something else entirely—makes no difference.

Because fruitcake is so loosely defined, versions exist all over the world. The fruitcake was introduced to North America by way of Europe in the 16th century but it wasn’t until mail order fruitcakes became available in 1913 that it became the lazy man’s go-to gift.

These fruitcakes included lots of nuts which is where the expression “nutty as a fruitcake” was derived in 1935. Most American mass-produced fruitcakes are alcohol-free but numerous traditional recipes are saturated with liqueurs or brandy. The key to a perfect one are moisture and taste—and they do taste good when multiple flavors are combined.

For a modern fruitcake model consider the Collin Street Bakery’s classic. A family-owned-and-operated bakery, located in Corsicana, Texas, has been baking their “world-famous DeLuxe Fruitcake” since 1896. The Fruitcake and Pecan Cake they produce today is still baked true to the Old-World recipe brought from Wiesbaden, Germany by master baker Gus Weidmann. He and his partner, Tom McElwee, built a lively business in turn-of-the-century Corsicana which included an elegant hotel on the top floor of the bakery. Many famous guests enjoyed their fine hospitality including Enrico Caruso, Will Rogers, John J. McGraw, “Gentleman Jim” Corbett, and John Ringling.

In fact, the bakery was thrust into the mail order business when Mr. Ringling’s circus troupe upon tasting the mouth-watering DeLuxe Fruitcake asked to have these Christmas Cakes sent to family and friends throughout Europe. And so began an international Christmas cake gift tradition.

Numerous variations of the Deluxe Fruitcake and Texas Pecan cakes are now available along with a variety of cheesecakes, specialty cakes, pecan pies, cookies, and gift sets.

Is a fruitcake revival possible? The big trick: getting people to actually try good, homemade fruitcakes. If you make it right, it takes considerable time. You should soak the fruit for days at a time to make sure they are plump and moist. It’s a noble dessert and it deserves another shot.

If you think you don’t like fruitcake then it’s time for you to try one from Gladys’ Bakery in Weimer, Texas. It’s not your typical fruit cake! Ranging from 1 pound to 150 pounds, and in various shapes, these old fashioned Czech fruitcakes are the cream of the crop.

Gladys’ Bakery has created an original pecan cake whose tops are solidly covered with rows of cherries and pecan halves. Bitter citron, raisins, and dates are left out leaving a satisfying pecan taste mixed with fresh cherries and pineapples. Have a slice with a cup of coffee or your favorite tea or Blue Bell ice cream and you’ll be hooked. It is a cake to be enjoyed all year long, not just at Christmas.

Gladys’ Bakery offers an amazing range of delicious baked goods including Pecan Pies, Texas Sized Cookies, Angel Food Cakes, Cinnamon Coated Pecans, and Apple Strudel. If you want to taste the goodness of home cooking, try one of these specialties.

When Gladys decided to try her hand at making a fruitcake her goal was to change the way the world thought of it. Gladys boasted that her fruitcakes were loaded with fresh pecans with just enough batter to hold it all together with no raisins, dates, spices, or citron. The first year, she mixed everything by hand and sold about 1,000 pounds worth.

In 1990 Gladys appeared on the Johnny Carson Show and the following year she was a guest on The David Letterman Show to show off her 150 pound Texas-shaped fruitcake. Gladys’ fruitcakes are shipped around the world and are in a class of their own. Fruit cakes seem to be Texas treasures and Gladys’ cakes are pure gold!

The American palate is primed for a fruitcake revival. So, if there are any pastry chefs out there who are up to the challenge, I’m here, waiting to try your homemade fruitcake. I promise I won’t make fun of it.

Friends are the fruitcake of life—some nutty, some soaked in alcohol, some sweet.