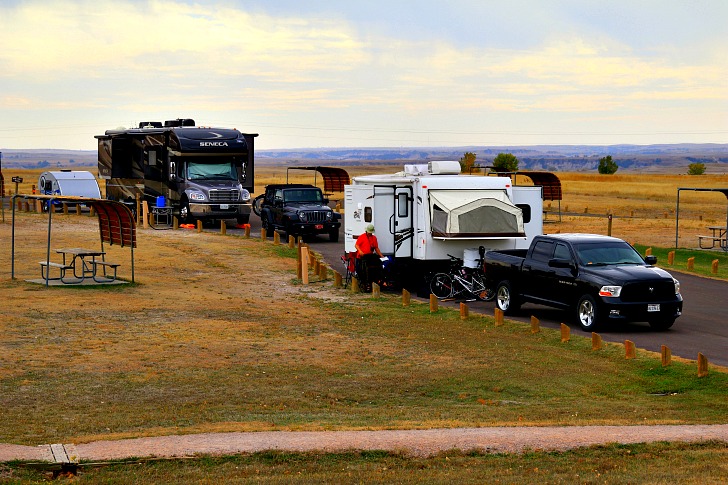 If you are a careful owner that follows preventive maintenance guidelines and takes measures to reduce humidity in your rig you are well on the way to maintaining your RV in good condition.

That will eliminate water damage and neglect as possible destroyers. But there’s not much you can do about the forces of nature when they strike.

Most forms of weather are not a problem while in your RV. People inside who aren’t touching anything conductive are safe. Lightning can damage wiring and electronics and even burn a small hole in the skin, but that is repairable. (So if you are in your RV and lightning is crashing down around you, stay put. You’re already in a good shelter.)

Heavy winds are likewise not usually a problem when situated in an RV park. If you are exceptionally concerned retract the slides.

But hail can be a killer. Hail can dimple the surface, rip holes in the skin, and destroy slide toppers.

Imagine a baseball dropped from an airplane flying at 30,000 feet. Now imagine that baseball reaching speeds of 120 mph as it falls to the ground—and imagine you’re under it!

Fortunately, most hail is small—usually less than 2 inches in diameter. The largest hailstone (nearly the size of a volleyball!) fell on July 23, 2010, in Vivian, South Dakota, and had a diameter of 8.0 inches, a circumference of 18.62 inches, and weighed just under 2 pounds.

Hail is a frequent occurrence through the nation’s heartland during spring and summer, especially the Plains states and Prairie provinces but it happen anywhere there’s a thunderstorm. The presence of large hail indicates very strong updrafts and downdrafts within the thunderstorm.

While most weather watchers had their eyes trained on the Gulf Coast, a severe thunderstorm swept through the Black Hills region in South Dakota, devastating much of the area’s campgrounds and leaving millions of dollars in damaged RVs and structures.

Hart Ranch Resort south of Rapid City was one of the parks hit hardest by the Monday, August 27, 2021 storm. Hail the size of baseballs destroyed vehicle windows and bodies as well as almost every RV skylight and vent. RV roofs also sustained significant damage. The storm hit suddenly just after 7 p.m. Many RVs at the park sustained interior damage when water poured through broken vents.

The storm also ravaged the Mount Rushmore KOA Resort, just six miles from the Mount Rushmore National Monument. Managers there reported most RVs and other vehicles sustained severe damage as did many of the roofed structures on the campground. About 90 percent of the roofs on their structures need to be replaced and about 80 percent of the vehicles on the park had broken windows. Most of the RVs parked sustained damage. Most of the roof vents on units were taken out.

There’s no 100 percent guaranteed way of avoiding hail damage other than keeping your RV parked undercover. Since that doesn’t work on the road or in an RV park, a few other strategies will help to reduce your risk.

Check the weather report along your route during the summer when thunderstorms are more likely. A good weather app on your phone or tablet that shows color radar will help you spot thunderstorm activity as it happens.

Tornado warnings are a major red flag since tornadoes are spawned from the same severe thunderstorms that produce hail. Consider altering your route to avoid the highest risk areas or delay departure to the following day.

When lightning and hail start happening it’s usually too late to look for shelter. Driving into hail at highway speeds will result in the hail smashing on the RV even harder, which increases the chance of permanent surface damage.

Hail can exceed the size of softballs and fall at speeds of over 100 mph, seriously injuring or killing anyone in its path. Even small hail driven by the wind can cause severe injuries.

DO NOT park under large trees or power lines, since these are easily felled by straight-line winds, which would be even worse. DO NOT stop in the middle of a lane under an overpass.

Most of the time hail damage is strictly cosmetic. This brings up the issue of whether to fix it or live with it. Talk to your trusted RV dealer and/or manufacturer before making your decision. There are no shortcuts to a good repair, so be wary of anyone who offers to fix it cheaply.

You may eventually encounter some hail, but it likely won’t be large enough to result in permanent damage. Don’t let a minor risk overshadow your travels—you’ll be fine and your RV probably will be too.