With a rich 300 year history, Charleston is America’s most beautifully preserved architectural and historical treasure 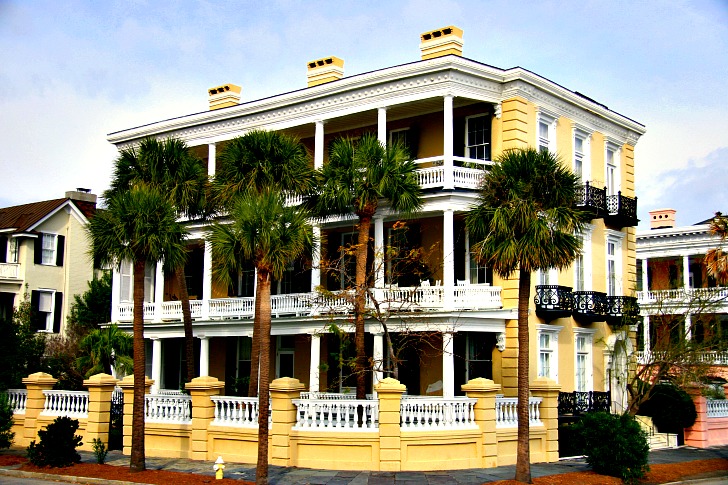 If you’re a history buff, you’ll love Charleston. Avid tourist? Charleston is the city for you. Lover of good food and charming scenery? Charleston has your number.

Charleston is home to one of America’s most intact historic districts. Nestled along a narrow peninsula—where the Ashley and Cooper rivers meet and empty into the Atlantic Ocean—it exudes deep South charm. With very few tall buildings, Charleston instead offers quaint cobblestone roads, colonial structures, a unique culture, and gobs of history.

Known as the Holy City, it was one of the most religiously tolerant cities in the New World—the results of which can be seen in the many striking church steeples that rise majestically over the city’s skyline.

Charleston also has a collection of some of the oldest and most impressive churches in America, including the French Protestant (Huguenot) Church, The Old Bethel Methodist Church, St. John’s Lutheran Church, St. Mary’s Roman Catholic Church, and the Mt. Zion A.M.E. Church.

More than 300 years ago, Charleston was originally named in honor of King Charles II of England. Charles Towne, as it was known, was founded in 1670 at Albmarle Point, a spot just across the Ashley River. Since that time it has played host to some of the most historic events in US history, including the first major battle of the American Revolution, and the start of the Civil War.

Perhaps the best known Charleston landmark is Fort Sumter, where the Civil War began on April 12, 1861. At that time, Union forces occupied the strategic Fort at the entrance of Charleston harbor. The South demanded that Fort Sumter be vacated, the Union army refused, and the rest is history. After a two-day bombardment, the North surrendered the Fort to the South. Nearby, visitors can also tour Fort Moultrie, which also played heavily in Civil War significance.

Perhaps the best way to see this town is by foot. Around every corner visitors can discover another hidden garden, great restaurants, historic houses, quaint shops, and friendly people.

A walk down any of Charleston’s quaint avenues, especially in the area designated as The Battery, is a walk back in time. Many houses date from the 1700s and 1800s, and a large number of these are listed in the National Register of Historic Places. Visitors can tour more than a dozen of these homes, including the Heyward-Washington House, built in 1772. This house was owned by Thomas Heyward Jr., a Revolutionary patriot and signer of the Declaration of Independence. It was also George Washington’s temporary residence during his Southern Tour of 1791.

Other houses of note that visitors can tour in Charleston include the Aiken Rhett House, one of the most intact building complexes showcasing urban life in Antebellum Charleston; the Joseph Manigault House, a premier example of neo-classical architecture built in 1803; and the Nathaniel Russell House, a neoclassical mansion considered one of America’s premier Federal townhouses.

Just outside of town, you can visit a number of Southern plantations, including Boone Hall and Drayton Hall. Boone Hall’s world-famous Avenue of Oaks leads to the Plantation house and gardens, and its original slave street and slave quarters. Located a stone’s throw from Boone Hall is the Charles Pinckney National Historic Site and historic Snee Farms. Pinckney was an original signer of the US Constitution, and was very influential in the document’s language. Drayton Hall, built between 1738 and 1742, is the oldest preserved plantation house in America.

While touring Charleston the campground at James Island County Park served as our home base. An ideal location amidst scenic beauty and an amazing drive-through display of Christmas lights, the 643-acre park is convenient to downtown Charleston and the South Carolina Lowcountry, and the campground provides a round-trip shuttle service to the city’s visitor center.

The park itself makes a fun destination. Miles of paved trails wind through forests and Palmetto trees and skirt by marshes and tidal creeks. Bicycle rentals are available, as are pedal boats and kayak rentals for its 16 acres of lakes.

If you lead a good life,

and say your prayers, 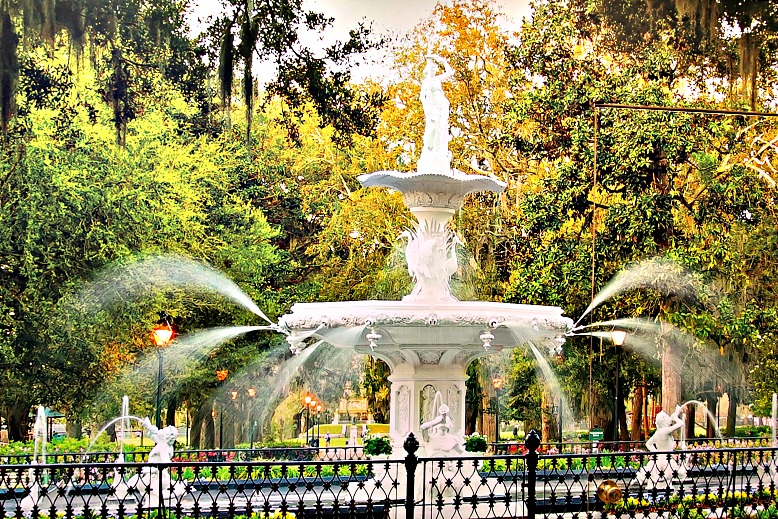 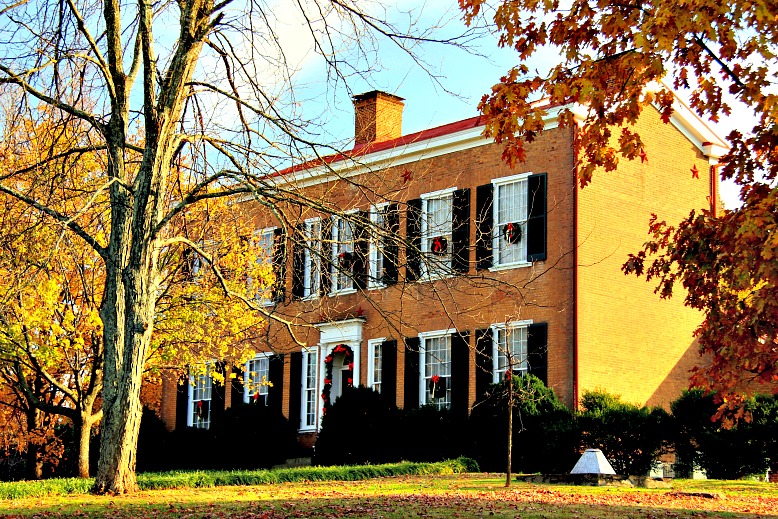 Federal Hill is the centerpiece of My Old Kentucky Home State Park. The house has been restored to its mid-19th century appearance and young women guides dressed like Scarlett O’Hara, lead tours.

Just outside Bardstown, the house and estate had been the home of the Rowan family for three generations, spanning a period of 120 years. In 1922 Madge Rowan Frost, the last Rowan family descendent sold her ancestral home and 235-acres to the Commonwealth of Kentucky.

Federal Hill is a Georgian style mansion that originally had 13 rooms. The number 13 is repeated throughout the house, supposedly to honor the 13 colonies at the time of America’s independence from Great Britain. The front of the home has 13 windows, and there are 13 steps to each floor of the house.

Completed in 1796, the rear wing of the house contains a kitchen, two bedrooms, and a smokehouse. The first floor has a dining room, parlor, and library. The second floor has bedrooms, and the third floor contained the nursery. The house is built of brick and has six large rooms that are 22 feet square. Ceilings are 13½-feet high. The floors are made of yellow poplar and the walls are 13 inches thick.

Madge Rowan Frost sold Federal Hill with the express wish and condition that the Commonwealth of Kentucky preserves the estate as a state shrine or historic site. Frost also gave the state the Rowan family heirlooms in perpetuity to help furnish authentically the home. The furnishings are some of the best examples of American furniture in the nation.

John Rowan (1773-1843), who built Federal Hill, was born in York, Pennsylvania, and in 1790 moved to Bardstown. He studied law in Lexington under the tutelage of George Nicholas, Kentucky’s first attorney general. He soon became one of Kentucky’s foremost defense lawyers. Rowan is also remembered for killing Dr. James Chambers in an 1801 duel fought over a disagreement as to who was the expert in classical languages.

The Rowan home hosted many famous individuals. Aaron Burr, Henry Clay, and other important political and social figures enjoyed the hospitality of the Rowan mansion.

Written in 1853, the words and music have touched the hearts of generations of Kentuckians. The song did not become associated with Federal Hill until the Civil War. Soldiers who saw the house and knew the song began to refer to Federal Hill as “My Old Kentucky Home.” Soon other people began referring to the mansion as the house that inspired one of Foster’s most beloved melodies.

Federal Hill’s popularity as a state park grew quickly. In 1957 the citizens of Bardstown and Nelson County formed the non-profit Stephen Foster Drama Association to produce an outdoor musical based on the life of the composer and as a tribute to “My Old Kentucky Home.”

Author Paul Green wrote the play and on June 26, 1959 the Stephen Foster Story opened in a newly constructed outdoor amphitheatre. The first season of the production was an unqualified success with over 70,000 people attending.

The park has a visitor center and gift shop where you can purchase home tour tickets. Admission is $14 for adults and $12 for seniors.

Where to Stay: My Old Kentucky Home State Park Campground offers 39 sites with utility hookups, a central service building housing showers and rest rooms, and a dump station. Closed for season from November 13 to March 15.