Whitman describes a trip on which he is embarking. He describes himself as being “healthy and free,” and he realizes he is the only person who is in complete control of his life; he chooses his own destiny. 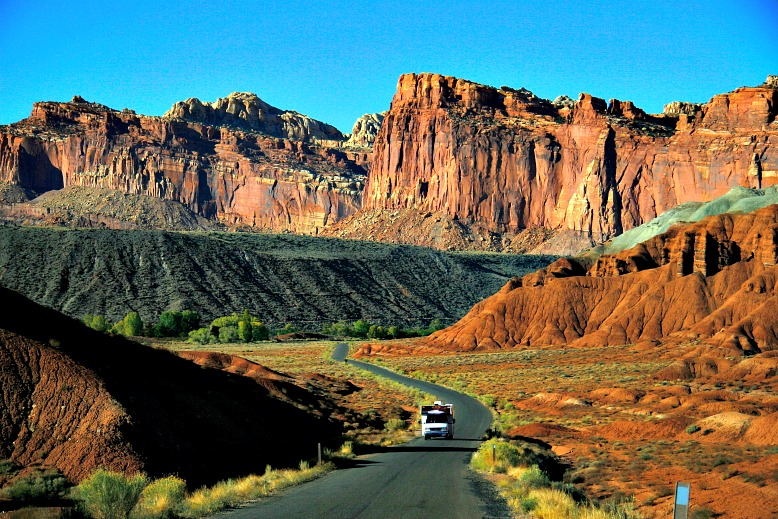 Afoot and lighthearted I take to the open road,

The long brown path before me leading wherever I choose.

The Great American Road Trip was born in 1856 with the publication of Walt Whitman’s poem “Song of the Open Road.”

Or at least that’s how the idea of such a journey came into being since 164 years ago there were no states between Texas and California, let alone cars, highways, or motels. A traveler’s creature comforts back then consisted of liberty and opportunity.

Whitman saw the (future) American Road Trip as a metaphor for democracy. In the new republic, a man had the freedom to go anywhere.

In 1903, when Dr. Horatio Nelson Jackson, his dog Bud, and a mechanic named Sewall Crocker set out in a red Winton touring car to claim America for the automobile, barely 150 miles of paved road existed in the entire country. A friend had wagered Jackson $50 that it would take him at least three months to drive from San Francisco to New York. In the end, it took 62 days of hard slogging.

Jackson’s feat quickly inspired imitators like the Murdocks, the first family to drive across America. In 1908, Jacob, Anna, and their three children successfully navigated the journey with the help of a personal mechanic for the car and a Winchester rifle for the coyotes.

Not to be outdone, 22-year-old Alice Ramsey led the first all-female road trip in 1909, tearing across the country at speeds of up to 42 miles an hour—when not being towed by horses.

The road situation remained a literal mess when Dwight D. Eisenhower joined a military convoy on a trip across America in 1919. At times the drivers averaged a mere 6 miles an hour. Those two months on the road helped to convince the future president that a complete overhaul was needed. His answer was the Federal Aid Highway Act of 1956 and the construction of the Interstate Highway System.

The law spurred millions of Americans to take to the open road—and legions of filmmakers and novelists to write about it.

Explaining the point of “On the Road” (1957), Jack Kerouac wrote that the novel tried to recapture a sense of meanings—embarking “on a tremendous journey through post-Whitman America to FIND that America.”

John Steinbeck took on a similar quest of rediscovery and reconnection—with his driving companion a poodle—and wrote about it in “Travels With Charley in Search of America” (1962). The author finished his journey with his hopes dashed, feeling lost, and worried about the rapid changes overtaking his country.

Still, Steinbeck fared better than most film characters who attempt the Great American Road Trip. In “Easy Rider” (1969), Peter Fonda and Dennis Hopper are pursued by murderous bigots; in “Thelma and Louise” (1991), the problem seems to be every American male.

But oh, the options today!

Smartphones or music players can plug directly into the RV’s sound system with a USB cable or auxiliary.

And yet, there’s a lot to be gained from abandoning yourself to the mercies of local radio stations. It’s a chance to ride along, even briefly, with local color that’s otherwise passing too quickly outside the window—the DJ’s accent, charmingly quirky small town ads, music from artists not yet known beyond their part of the country.

Just a fleeting reminder that digital conveniences can deprive us of the analogue pleasure of immersing ourselves in somewhere new.

The open road is a beckoning, a strangeness, a place where a man can lose himself.