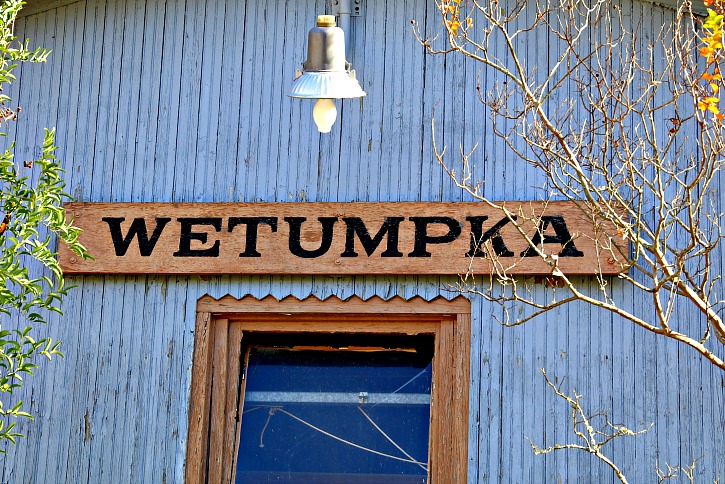 Known as “The City of Natural Beauty,” Wetumpka, Alabama is located just northeast of Montgomery on the banks of the Coosa River. The name Wetumpka is a Creek Indian word meaning “rumbling waters,” describing the sound of the nearby Coosa River. The Coosa River flows through the middle of the city, dividing the historic business district from its residential counterpart.  Bibb Graves Bridge, a focal point of the City was built in 1937. Designed by state bridge engineer Edward Houk and named after Governor Bibb Graves, it is reputed to be one of two bridges in Alabama to be suspended by reinforced concrete.

Wetumpka has a population of 8,371 and has been on a bit of a roller coaster ride of late. An ambitious downtown revitalization effort was started about three years ago. Then in January of 2019, a powerful tornado swept through the historic downtown area causing widespread damage but thankfully no deaths. The tornado damaged 35 homes throughout Elmore County and destroyed or damaged multiple buildings in the city’s downtown including the police station and Wetumpka’s celebrated First Presbyterian Church. The city completed the revitalization a year ago to rave reviews.

It was 14 months before the tornado ripped through the town that we visited Wetumpka. Proceeding across Bibb Graves Bridge to the largely residential west side, we first stopped on West Bridge Street, across from the First Presbyterian Church organized in 1834. It was the site of the gathering of the Wetumpka Light Guard as they departed their families when they went to do battle in the Civil War on April 16, 1861. We discovered a number of historic and beautiful homes within a five block area mainly on Tuskeena Street (one block north on West Bridge and to the left down Tuskeena).

Our next stop was the First United Methodist Church at 306 West Tuskeena Street. The building was completed 1854. In 1845, an historic session of the Alabama Conference delegates voted to become part of the Methodist Episcopal Church South and so it remained until 1939.

Directly behind the church we noted the L & N Depot. Established in 1906 and placed on the National Register of Historic Places in 1975, the station served as a passenger and freight depot until 1973. Used for several years as the first home of the Wetumpka Depot Players, at the time of our visit it was used as a place of worship and for youth activities and owned by First United Methodist Church. Next door to the Methodist Church stands a house built by Benjamin Fitzpatrick, a local attorney and circuit solicitor and son of 9th Governor of Alabama, Benjamin Fitzpatrick.

Crossing the Bibb Graves Bridge to the largely historic business district east side we wandered this area before proceeding to the Wind Creek Casino. Overlooking the beautiful Coosa River, Wind Creek is the home of a new hotel.

In July 2020, Erin and Ben Napier, stars of HGTV’s Home Town, reported that they were taking over the entire town of Wetumpka for their home-renovation show. As a spinoff of the network’s popular home renovation show “Home Town,” which features Ben and Erin Napier renovating old and sometimes neglected homes for new owners, “Takeover” is also focused on renovations but this time the couple revamps a town. When it airs later this spring, “Home Town Takeover” will showcase 12 renovation and upgrade projects in and around Wetumpka’s downtown and historic district. Viewing dates are yet to be announced.

Wetumpka was selected from among 2,600 entries to be the subject of the new HGTV cable TV program called “Home Town Takeover.” The six-part documentary will show Ben and Erin Napier leading a team of renovation pros to breathe new life into Wetumpka including several homes as well as some locally grown businesses and historic treasures unique to the city.

The experience was special for the film crew. Producers, directors, camera operators, audio, and lighting specialists and others spent six months in Wetumpka not just working but living there from August 2020 through January. Months on-site is nothing new for them, but many were surprised by what they found when they arrived in Wetumpka.

“You never know what to expect, but right when I got to town, it was so pretty,” Carissa Sison, line producer for the show, told Alabama Newscenter. “Our offices had the Coosa River right behind them and it was such a tranquil setting. But the best thing was the people. They were so happy to meet us. I’ve never experienced that kind of friendliness in my life and definitely not in my career.”

Liz Kerrigan, the show’s executive producer, agrees, saying the residents’ community spirit added an extra layer of charm to a city that had already impressed her. “Looking at photos, I knew the town was adorable,” she said. “But a city can look one way and then feel different. Not here. The good vibes just make Wetumpka even cuter.”

Kerrigan was taken aback by leaders’ open arms and residents’ desire to pitch in. “I just didn’t expect people to be so grateful and so willing to help,” she said. “It was actually an emotional experience. Everyone was thrilled to work with us.”

Sison stressed that the city’s reaction inspired her and the rest of the show’s team to get more invested than normal. “Their outpouring of love motivated us to really want to help this town,” she said. “We’re always passionate about our work but this was different. I don’t think I speak for just myself when I say we felt like we were a part of Wetumpka.”

Kerrigan and Sison hope the emotion evoked in the show’s creation comes through TV screens and that viewers get a sense of the Wetumpka they came to know and that interest in the city keeps rising. “It’s going to be great when the show airs. I hope even more people fall in love with Wetumpka, Sison added.”

But it’s also part of the show’s wider vision, Kerrigan said. “The entire intention behind this series was to create forward momentum for change, to be a catalyst for an even bigger transition,” she said. “The desire was that the city would take this ball and run with it. What’s so awesome is after being there we know that Wetumpka will do just that. They will build on this and take it 1 million steps farther. Seeing what we imagined fulfilled is really rewarding.”

And if watching Wetumpka’s journey on “Home Town Takeover” spurs other small towns to pursue their own progress, that’s the ultimate prize. “We’re showing how positive change in small towns everywhere is possible,” Kerrigan said. “We hope this causes a national movement for small towns across America to come together and do the same thing, even if it’s on a smaller scale.”

But this spring, eyes will be focused on one specific small town and while Wetumpka leaders and residents have made their enthusiasm obvious, the show’s team seems every bit as excited as the city.

“We just feel so lucky to be able to shine a light on the people and the places of Wetumpka,” Kerrigan said. “We want a huge spotlight on them.”

In the summer, you can visit the city’s River and Blues Music & Arts Festival. In the winter, bundle up and gawk at its New Year’s Eve “Asteroid Drop” (via The City of Wetumpka). If you have a thing for golf clubs, granaries, barbecue places, nature trails, and botanical gardens—or if you need to visit the place that the Hollywood epics Big Fish and The Rosa Parks Story were filmed—Wetumpka, Alabama is your place. And it’s exactly this small-town magic that drew the Napiers to Wetumpka in the first place.