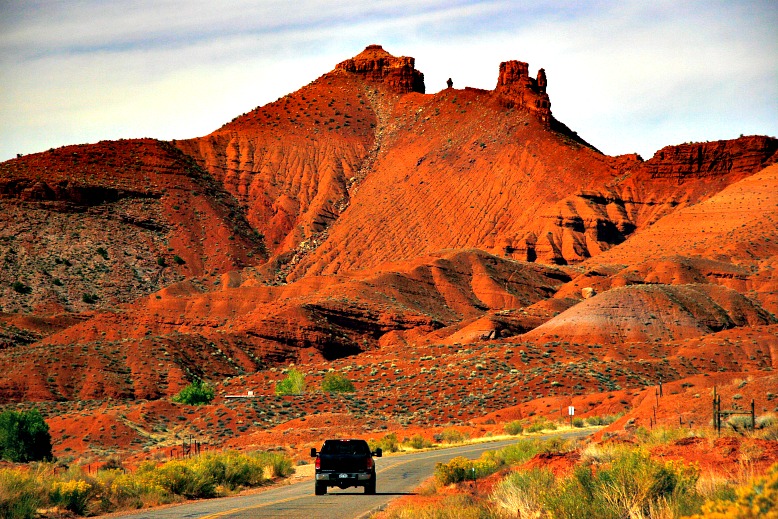 Eighty-eight percent of the American West is currently experiencing a drought and the US’ largest reservoir, Lake Mead, is at its lowest level since it was filled in the 1930s. Named after Bureau of Reclamation Commissioner Elwood Mead, Lake Mead stretches 112 miles long with a total capacity of 28,255,000 acre-feet, a shoreline of 759 miles, and a maximum depth of 532 feet. It provides water supply, hydroelectric power, recreation, and wildlife habitat. Because of prolonged drought and increasing demand, Lake Mead—which provides water to over 20 million people in the states of Arizona, Nevada, and California—has not actually reached its full capacity since 1983. With a record-breaking heatwave sizzling its way across the West this past week officials will likely declare the first-ever water shortage for the Colorado River which feeds Lake Mead.

The shortage will affect much more than Californians’ shower times. No “good” in this list but here’s…

The bad: Agriculture. Rising water prices and dwindling government subsidies means farmers are letting fields of almonds (one of California’s most lucrative crops), tomatoes, and other produce go fallow.

The ugly: Fishing. 17 million salmon are being chauffeured from drying rivers to the ocean, possibly costing more than $800,000 but saving 23,000 industry jobs.

The also-bad-and-ugly: Power. Grids are already struggling to keep the A/C running and capacity at hydroelectric power facilities is plummeting. At Lake Mead’s Hoover Dam, it’s down 25 percent.

Looking ahead…fire season has already started will most likely last longer than usual due to this drought.

And now onto “favorite mountains for your next road trip”…

Summer is finally here and with COVID restrictions lowered across the country it’s time to load up the RV, head for the mountains, and char the heck out of some marshmallows over an open fire. Think: fresh air, rugged trails, and a mountain stream. What’s more, a high-altitude escape may actually be closer than you realize—like within driving distance. From old standbys to a few spots you’ve probably never even heard of (what’s up, Fayetteville?), these are the best mountain towns in the US and Canada.

Nestled at the foot of Mount Mansfield, Stowe is a quintessential New England town and everything you’d want in a Vermont getaway. In terms of outdoor attractions, there are ski slopes, backcountry trails, waterfalls, and The Current’s annual outdoor sculpture show. As a bonus, the cute little downtown area has wonderful shops, restaurants, breweries, and inns.

With the official designation earlier this year of America’s newest national park, New River Gorge National Park and Preserve, neighboring Fayetteville has been buzzing. However, this laid-back, tight-knit community (named for American Revolutionary War hero Marquis de Lafayette) has long been a place where adventure reigns. The nearby New and Gauley Rivers offer world-class whitewater rafting and the Fayetteville area is home to some of the best rock climbing along the East Coast. It’s also a prime spot for mountain biking.

Julian is a small mountain community in Southern California. This historic gold-mining town is nestled among oak and pine forests between the north end of the Cuyamaca Mountains and the south slope of the Volcan Mountains. Take a step back in time to the days of Julian’s beginning rooted in the 1870s gold rush and discover the charms of Julian. You’ll enjoy visiting Julian for its laid-back charm, historical buildings, beautiful surroundings, and delicious apple pies.

The western gateway to Great Smoky Mountains National Park, Gatlinburg in eastern Tennessee is a playground of outdoor adventure. No matter the season you visit, there’s always something active (and totally awesome) to do—from hiking and whitewater rafting to skiing and snowshoeing when the temperature drops.

A Bavarian-inspired village with alpine charm in spades, Helen has heaps of character and enchanting architecture. Given its Germanic roots, we were hardly shocked to learn that Oktoberfest is hugely popular. Vineyards, breweries, and an array of shops attract year-round travelers. For a sweet treat, stock up on confections at Hansel & Gretel Candy Kitchen. Speaking of food, the köstlich (German for delicious) and authentic dining scene also deserves a shout-out. Nearby Unicoi State Park offers 53 acres of forested trails, plus numerous campsites and a lake.

One and a half centuries ago, Helena became the “Queen City of the Rockies” with the boom brought on by the 1864 gold strike. Helena grew along Last Chance Gulch and in 1875 became the Montana territorial capital. Today the state capital’s grand architecture, beautiful cathedral, numerous museums, and historic sites offer a glimpse into the rich and deep history of the city. Helena also boasts numerous lakes, a historic district, vibrant cultural center with a busy event calendar, eclectic shopping, art galleries, terrific local bands, great restaurants, local microbreweries, an epic trail system, and the nearby Helena National Forest.

Jacksonville is nestled in the Siskyou Mountain foothills along the Rogue River Valley and is easy to fall in love with. The little town is the Heart of Rogue Valley wine country which includes the Applegate Valley Wine Trail. Though sometimes busy the small-town ambiance (population 2,860), gorgeous setting, and beautifully preserved late 1800s architecture combines to make a very attractive town. The little gem of a town is highly walkable and has at least one of everything—except chain stores.

With mountains all around, a river running through it, and national parks nearby, Redding is an outdoor paradise for all ages. Cradled by Mount Shasta and Mount Lassen, Redding has 300+ sunny days per year. Redding is also home to the famous Sundial Bridge and world-class fishing. Turtle Bay Exploration Park is a 300-acre campus along the banks of the Sacramento River. Gateway to the city’s 220-mile trail system, the Park features a botanical garden, natural history and science museum, and exploration center. The 300-acre complex is tied together by Redding’s jewel, the Sundial Bridge.

In Berea, you can celebrate Kentucky crafts by visiting dozens of artist’s studios, galleries, and stores. The Folk Arts and Crafts Capital of Kentucky, Berea is ranked among the top art communities in the U. S. Nestled between the Bluegrass region and the foothills of the Cumberland Mountains, Berea offers visitors over 40 arts and crafts shops featuring everything from handmade dulcimers and homemade chocolate to jewelry stores, art galleries, quilt-makers, and even glassblowing studios. The Pinnacles in Berea College Forest offers beautiful views, proximity to Daniel Boone Forest, and easy access from town.

Resting at the foot of the Peaks of Otter in the heart of Virginia’s the Blue Ridge Mountains, Bedford is home to several historic landmarks including the National D-Day Memorial, the Elks National Home, and the Avenel Plantation. Nearby, visitors have a wide range of attractions: Thomas Jefferson’s Poplar Forest, Smith Mountain Lake, the Blue Ridge Parkway and the Peaks of Otter, and the Sedalia Center for the Arts. There are a dozen wineries within a short drive out of the town and plenty of antiquing, horseback riding, hunting, fishing, and other outdoor sports.

Located in the foothills of the Appalachian Mountains, South Carolina’s Upcountry packs plenty of alpine splendor. As the hub of the Upcountry, Greenville has been finding its way onto many national Top Ten lists for its lively arts scene, its modern downtown, and outdoor activities. Table Rock, Jones Gap, Paris Mountain, and Caesars Head state parks all deliver Blue Ridge Mountain adventure in Greenville’s backyard. The Cherokee Foothills National Scenic Byway traces a dramatic break of the Blue Ridge Escarpment with its abundance of waterfalls.

Nestled in a stunning mountain bowl and surrounded by one of the largest ponderosa pine forests in the West, the beautiful town of Prescott is steeped in history with an authentic taste of western heritage. With shaded trees, well-kept yards, and Victorian houses of an earlier era, Prescott seems the idealized small town. Courthouse Plaza, dominated by the 1916 Yavapai County Courthouse, works for me as the classic town square—the centerpiece of Anytown, USA.

I do enjoy Banff. But I desperately and truly love Jasper. Jasper possesses many similar amenities to Banff but on a smaller scale. Located 180 miles north of Banff along the Icefields Parkway, Jasper attracts those that are looking to get a little further off the beaten path and away from the crowds. Jasper is a small town in the middle of Canada’s largest Rockies national park. Mount Edith Cavell is nearby as stunning as Spirit Island in the middle of Maligne Lake. The park is home to the world’s second-largest dark sky preserve and has 750 miles of hiking trails. It is a beacon to all lovers of the outdoors.

Thousands of tired, nerve-shaken, over-civilized people are beginning to find out going to the mountains is going home; that wilderness is a necessity.