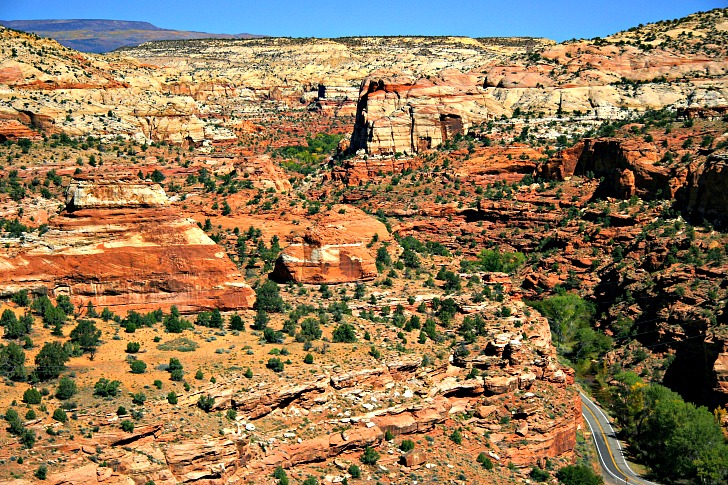 Given the astonishing beauty and richness of the 63 U.S. national parks, it’s no wonder they’re so popular: They received 237 million visitors in 2020—only a 28 percent drop from the year before despite widespread closures and travel slowing nearly to a halt due to the pandemic. This year will likely attract many more visitors drawn to outdoor spaces relatively close to home.

These are some of my tips for finding beautiful, less crowded spots, and moments of solitude even in the most popular of these wonderful destinations.

Every national park-lover needs to visit Great Smoky Mountains, Zion, and the Grand Canyon at some point but consider visiting some of the lesser-known parks as well. One of my favorite “sleeper” parks is Petrified Forest in Arizona; here you’ll find remains of a colorful prehistoric forest, some of the logs more than 100 feet long and up to 10 feet in diameter. But there’s so much more: artifacts of the ancient indigenous people who lived here including the remains of large pueblos and massive rock art panels, fossils of plants and animals from the late Triassic period (the dawn of the dinosaurs), a striking and vast Painted Desert (a badland cloaked in a palette of pastel colors), a wilderness of more than 50,000 acres where you can find wildness and beauty, and a remnant of historic Route 66 complete with a 1932 Studebaker!

Other favorites include Congaree in South Carolina (the largest intact expanse of old-growth bottomland hardwood forest remaining in the southeast) and California’s remote Lassen Volcanic, one of the only places in the world that has all four types of volcanoes—cinder cone, composite, shield, and plug dome.

Find Little-known Havens within a Park

Most national parks are pretty big places but visitors tend to congregate at some of the most well-known and iconic sites leaving other areas blissfully quiet. For example, Yosemite Valley includes some of the park’s most famous attractions but the valley is a tiny fraction of the park. Visit the Hetch Hetchy area, often described as the twin of Yosemite Valley, and hike to Wapama Falls or Rancheria Falls. Or drive to the lesser-visited northwest corner of Yellowstone and walk the Bighorn Pass Trail that follows the striking Upper Gallatin River.

At Rocky Mountain avoid the popular Bear Lake Corridor area and take the dramatic Ute Trail through the park’s alpine tundra or the lovely Colorado River Trail in the park’s Never Summer Range.

In Joshua Tree, take a walk to Cottonwood Springs Oasis, filled with thick California fan palms and large cottonwoods. Grinding holes in nearby rocks tell the story of the ancient use of the oasis by Native Americans centuries ago. Cottonwood Spring is noted for its birdlife.

Visit during the Off-season

Many parks accommodate the majority of their visitors in the three summer months leaving the rest of the year relatively fallow (although these shoulder seasons are growing shorter as more people are adopting this strategy). The waterfalls of Yosemite are typically at their peak in May when it gets 10 percent of the park’s annual visits compared to 16 percent in August; fall foliage at Acadia is at its most colorful in October when it sees 13 percent of its annual visitors, compared to 22 percent in August; and wildflowers in the Grand Canyon are usually most prolific in April (9 percent of visitors versus 13 percent in July). For even more solitude, go for the real off-season—usually winter—when many parks such as Arches and Zion are quiet and beautiful.

Get Out of your Car and Walk

It’s the natural law of parks that the number of people you see decreases exponentially with each mile you go from the trailhead and walking is the most intimate way to experience the parks. It allows you to appreciate the parks through so many of the senses: See the tracks of elusive mountain lions at Glacier National Park, hear the iconic call of the canyon wren as you hike through the Grand Canyon, smell the sweetness of Ponderosa pine bark warming in the sun in Yosemite, taste the salt air as you walk the Ocean Path at Acadia, and feel the solid granite beneath your feet as you explore the trails of Isle Royale.

Use Shuttle Trams when Available

Traffic congestion and lack of parking plague many parks and the National Park Service is responding with shuttle buses at popular destinations such as Zion, Bryce Canyon, Rocky Mountain, Yosemite, Acadia, Grand Canyon, and Denali. Use these transit systems to avoid the traffic and parking headaches that too many of us face in our everyday lives.

Get to attraction sites and trailheads early in the day and consider hikes late in the day—parking spaces are more readily available at these times and you’ll experience the parks at the “golden hours” when the light is at its finest—soft and rich—for viewing and photographing and when wildlife is more likely to be seen. Experience the dawn chorus of birds, one of the world’s great natural phenomena, and enjoy it in relative solitude.

Nearly all national parks require an entrance pass/fee. Of course, you can obtain passes at the parks you visit but this will probably require waiting in line at the park entrance station or visitor center. You can obtain passes in advance on the National Park Service website and some parks have an express lane for visitors who already have a pass. You can also save time and money purchasing the goods and services you’ll need (food, fuel, camping supplies) for your visit before you enter the park. These items are often available in the parks but only at a few locations and you’ll probably have to wait behind other visitors to make your purchases.

There will always be a thirst for touring the nation’s iconic parks—for hiking in the canyons of Zion or scampering among the natural arches and pinnacles of Arches National Park. But travelers who’ve hiked New Mexico’s otherworldly Malpais National Monument or driven National Scenic Byway 12 through southeastern Utah’s Grand Staircase-Escalante National Monument without having to navigate throngs of people may never again think the same way about visiting America’s iconic national parks.

Keep close to Nature’s heart…and break clear away, once in awhile, and climb a mountain or spend a week in the woods. Wash your spirit clean.