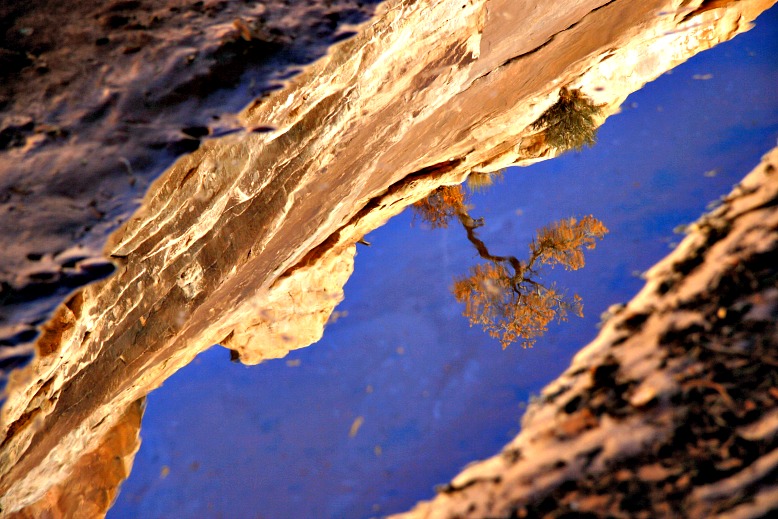 Natural Bridges National Monument covers a relatively small area in southeastern Utah. It is rather remote and not close to other parks and as a result is not heavily visited.

Since natural bridges are formed by running water, they are much rarer than arches which result from a variety of other erosion forces. Natural bridges tend to be found within canyons, sometimes quite hidden whereas arches are usually high and exposed as they are often the last remnants of rock cliffs and ridges.

Unlike Arches National Park with over 2,000 classified arches, there are only three natural bridges here. The area also has some scattered Indian cliff dwellings, pictographs, and scenic white sandstone canyons.

The pinyon and juniper covered mesa is bisected by deep canyons exposing the Permian Age Cedar Mesa Sandstone. Where meandering streams cut through sandstone walls, three large natural bridges were formed. At an elevation of 6,500 feet above sea level, Natural Bridges is home to a wide variety of plants and animals. Plants range from the fragile cryptobiotic soil crusts to remnant stands of Douglas-fir and ponderosa pine. Hanging gardens in moist canyon seep springs and numerous plants flower in the spring.

Animals range from a variety of lizards, toads, and an occasional rattlesnake, to peregrine falcons, mountain lions, bobcats, and black bear.

Several names have been applied to the bridges. First named “President,” “Senator,” and “Congressman” by Cass Hite, the bridges were renamed “Augusta,” “Caroline,” and “Edwin” by later explorer groups. As the park was expanded to protect nearby Puebloan structures, the General Land Office assigned the Hopi names “Sipapu,” “Kachina,” and “Owachomo” to the bridges in 1909. Sipapu means “the place of emergence,” an entryway by which the Hopi believe their ancestors came into this world. Kachina is named for rock art on the bridge that resembles symbols commonly used on kachina dolls. Owachomo mean “rock mound,” a feature atop the bridge’s east abutment.

To make the experience even more breathtaking, each natural bridge is accessed by a steep hike down to the base of the bridge and then back up again. Starting down the trail to Sipapu Bridge, we arrived at the first rough-hewn Navajo-looking log ladder and scampered down. The trail to the Sipapu Bridge hugs a massive overhanging rock wall that Mother Nature has painted in wide swaths of black, orange, and pink. Considering the forces of wind and water that shaped these rocks, we couldn’t help but imagine the ancient people who once sought shelter here.

Sipapu Bridge is the second largest natural bridge in the world (only Rainbow Bridge in Glen Canyon is bigger). In Hopi mythology, a “sipapu” is a gateway through which souls may pass to the spirit world. After admiring the bridge for a while, we made our way back up along the striped rock wall to the wooden ladders and on up to the loop road that winds through the park.

The second stone arch, Kachina Bridge, also requires hiking down stairways that have been carved into the sandstone by the National Park Service and clambering down log ladders as well. Unlike Sipapu, however, Kachina is a thick and squat bridge that crosses a large cool wash filled with brilliant green shade trees.

A massive bridge Kachina is considered the “youngest” of the three because of the thickness of its span. The relatively small size of its opening and its orientation make it difficult to see from the overlook. Along the flanks of this bridge we saw the faint etchings of petroglyphs that were pecked out of the rock eons ago. We were intrigued to learn that some of the cliff dwellers from the Mesa Verde area 150 miles away in Colorado had called this place home around 1200 A.D. We got our workout once again as we huffed and puffed up the ladders and staircases back to the loop road.

Owachomu Bridge is probably the most spectacular and also the easiest stone bridge to reach. The trail into the canyon underneath the bridge is a short distance from the overlook. It is the oldest bridge in the park and rock falls have reduced the thickness to only 9 feet, so it may not be here much longer. Needless to say, walking on top of the bridges is not allowed.

Natural Bridges’ roads, trails, campground, and restrooms are open. The visitor center remains closed. When open, the visitor center has a slide program, exhibits, publications, and postcards. A 13-site campground is open year-round on a first-come, first-served basis.

People repeatedly occupied and abandoned Natural Bridges during prehistoric times. They first began using this area during the Archaic period from the year 7000 BC to 500 AD. Only the rock art and stone tools left by hunter-gatherer groups reveal that humans lived here then. Around 700 AD, ancestors of modern Puebloan people moved onto the mesa tops to dry farm and later left as the natural environment changed.

Three hundred years after their ancestors left, the farmers returned. They built homes of sandstone masonry or mud-packed sticks, both on the mesa tops and in alcoves in the cliffs. South facing caves provided passive solar heating and cooling. The farmers often chose sites near seep springs where water could be found.

Styles of masonry, ceramic decoration, and other artifacts suggest that the people here were related to those of the Mesa Verde region to the east. Influences are clearly evident from the Kayenta region to the southwest and the Fremont culture to the north. Like these people, the inhabitants of Natural Bridges left this area for the last time around 1270.

Navajos and Paiutes lived in the area during later times, and Navajo oral tradition holds that their ancestors lived among the early Puebloans. 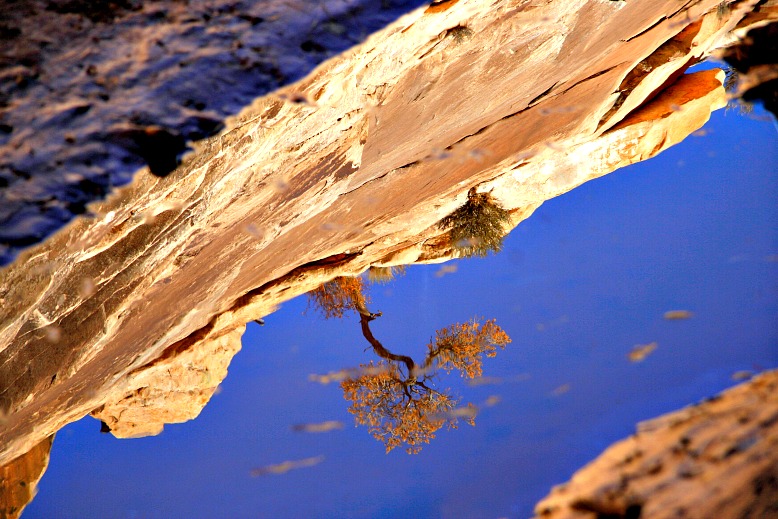 From sea to shining sea, America is packed with unforgettable, extraordinary, and unique places administered by the National Park Service, but few offer a more striking landscape than Natural Bridges National Monument.

Formed by the power of water in a place where water is all but absent, three stone bridges in the Utah desert have been protected as a national monument since 1908, but their history goes back much, much farther.

How are natural bridges formed?

The three bridges of Natural Bridges National Monument are thought to be about 5,000 years old—practically brand new in geological terms. They are geologically different from natural arches like the ones found 100 miles away at Arches National Park.

Since natural bridges are formed by running water, they are much rarer than arches, which result from a variety of other erosion forces. Natural bridges tend to be found within canyons, sometimes quite hidden, whereas arches are usually high and exposed, as they are often the last remnants of rock cliffs and ridges.

Rain is scarce in the Utah desert, but when it does fall, it often creates fierce flash floods that tear away at the canyon walls. The curved, meandering path of the floodwaters gradually undercuts the stone, and when two parallel streams undercut the same rock formation from opposite sides, they eventually break through and meet in the middle — and a bridge is born.

In 1883, prospector Cass Hite wandered up White Canyon from his base camp along the Colorado River in search of gold. What he found instead were three magnificent bridges water had sculpted from stone. National Geographic publicized the natural bridges in 1904, and President Theodore Roosevelt established Natural Bridges National Monument four years later, creating Utah’s first national park unit in 1908.

The bridges themselves have been named and renamed several times over the years. First named “President,” “Senator,” and “Congressman” by Cass Hite, the bridges were renamed “Augusta,” “Caroline,” and “Edwin” by later explorer groups.

As the park was expanded to protect nearby Puebloan structures, the General Land Office assigned the Hopi names “Sipapu,” “Kachina,” and “Owachomo” in 1909.

Sipapu, or “the place of emergence,” refers to the entryway through which the Hopi believe their ancestors arrived in this world. Sipapu is the largest of the bridges, and the second-largest natural bridge in the world.

Kachina gets its name from the rock art that adorns the bridge, resembling symbols often seen on kachina dolls. The thickest of the three bridges, Kachina is probably the youngest.

Owachomo means “rock mound.” This bridge gets its name from the distinctive rocky feature atop its east abutment. The narrow profile of Owachomo suggests that it has eroded more quickly than its neighbors.

Moderate hiking trails, some with metal stairs or wooden ladders, provide closer access to each bridge. An 8.6-mile hiking trail links the three natural bridges, which are located in two adjacent canyons.

To make the experience even more breathtaking, each natural bridge is accessed by a steep hike down to the base of the bridge and then back up again. Each trail is less than 1.5 miles in length and takes less than an hour to complete.

Bring plenty of water, along with sunglasses, sunscreen, appropriate footwear, and a camera. The cooler months offer more agreeable temperatures.