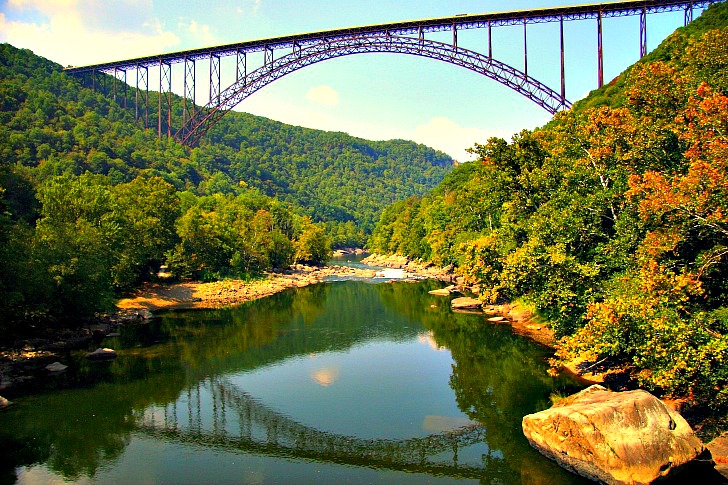 Close your eyes and imagine a place with thousands of acres of lush green forests, rushing waters, and cascading waterfalls. Sound too good to be true? Such a place exists and it’s inside the New River Gorge National Park & Preserve. Teeming with rarified beauty and endless opportunities for adventure, the New River Gorge is the perfect destination for your next road trip. Mark America’s newest national park on your map, pack up the RV, and hit the road for Almost Heaven awaits you.

Home to the New River which drops 750 feet over 66 miles, adventuresome rafters and kayakers have long been drawn to this whitewater area for its class five rapids. The New River which flows northward through low-cut canyons in the Appalachian Mountains is one of the oldest rivers on the planet. The park encompasses more than 70,000 acres of land along the New River. The rugged mountains were once home to several coal mining camps and some historical artifacts and buildings remain.

Begin your experience with a stop at Canyon Rim Visitor Center which is situated on the edge of the gorge for maps, current information, and chats with a park ranger. You can learn about current safety protocols and visit the bookstore. The visitor center features an exhibit room filled with photographs and exhibits on the people, towns, and industry of the gorge. Other displays focus on the recreation and natural history of the area. Visitors can view an 11-minute video to orient themselves to all that makes New River Gorge National Park and Preserve such a special and significant place.

You’ll want to see the New River Gorge Bridge, a highly photographed work of structural art. If you plan your road trip just right, you can visit during Bridge Day a one-day festival (October 16, 2021) where you’ll watch BASE jumpers launch off the 876-foot bridge and parachute down to the New River. New River Gorge is the only national park in the U.S. that permits this extreme activity.

One such state park is Babcock. Located 20 miles southeast of the New River Gorge Bridge, Babcock State Park is home to 4,127 acres of iconic scenery and stunning views. Babcock State Park is best known for the Glade Creek Grist Mill, a fully functional replica of the original Cooper’s Mill that once ground grain on Glade Creek long before Babcock became a state park. Of special interest, the mill was created by combining parts and pieces from three mills that once dotted the state. The basic structure of the mill came from the Stoney Creek Grist Mill which dates back to 1890. After an accidental fire destroyed the Spring Run Grist Mill near Petersburg (Grant County) only the overshot water wheel could be salvaged. Other parts for the mill came from the Onego Grist Mill near Seneca Rocks (Pendleton County).

A living monument to the over 500 mills which thrived in West Virginia at the turn of the century, the Glade Creek Grist Mill provides freshly ground cornmeal which park guests may purchase depending on availability and stream conditions. Visitors to the mill may journey back to a time when grinding grain by a rushing stream was a way of life and the groaning mill wheel was music to the miller’s ear.

Other attractions include recreational activities like hiking, fishing, and mountain biking.

Babcock is home to 28 cozy cabins tucked away in the woods. Each cabin provides a peaceful retreat to guests accompanied by the tranquil sights and sounds of nature. Several of the cabins are located near the Glade Creek Grist Mill. So close, you can almost hear the mill’s wooden frame churn. Babcock also includes a 52-unit campground if you wish to completely surround yourself in nature.

Nature and landscape photographers who wish to fly a drone near the Glade Creek Grist Mill are required to check-in at the park office in advance. The use of drones is permitted but only from 1-3 p.m., daily. Drones may not be flown over buildings or the parking area and must stay a minimum of 20 feet away from the mill.

Start planning your next trip to the area and get ready for one-of-a-kind experiences and lasting memories.

A rugged, whitewater river the New River is actually among the old rivers on Earth 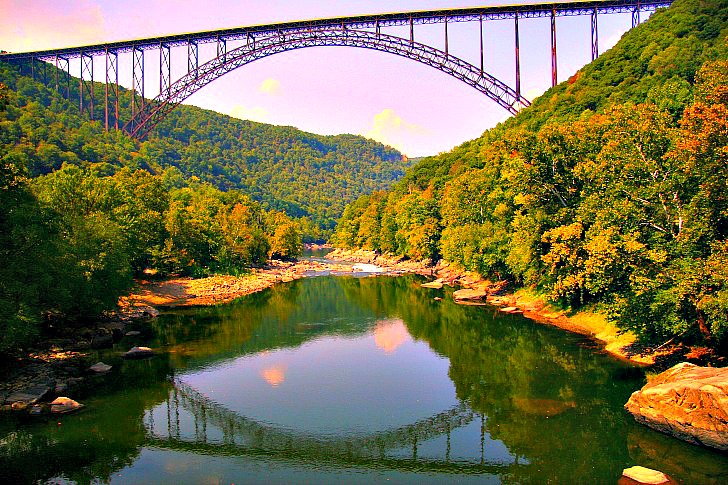 Located in southern West Virginia, New River Gorge National River preserves over 70,000 acres of land along 53 miles of the New River between the towns of Hinton and Fayetteville from Bluestone Dam to Hawk’s Nest Lake. The park and surrounding area are rich in cultural and natural history with an abundance of scenic and recreational opportunities.

A rugged, whitewater river flowing northward through deep and spectacular canyons, the New River is actually among the oldest rivers on Earth. It has carved and continues to carve the deepest and longest river gorge in the Appalachian Mountains.

Established in 1978, New River Gorge National River offers something for everyone. New River, estimated to be over 250 millions year old, is the second oldest waterway in the world after the Nile. Its meandering course through the Appalachian mountains hides many natural wonders that appeal to every type of outdoor enthusiast.

The upper part of the river (southern section) features rapids ranging from Class I to Class III and include long pools of steady water, whereas the Lower Gorge of the New River (northern section) is far more difficult in comparison with Class III to Class V rapids, littered with large boulders and strong currents. Commercial outfitters conduct trips down the river from April through October.

Most begin their visit to New River Gorge at the Canyon Rim Visitors Center near Fayetteville. Inside are exhibits pertaining to the gorge’s history and recreational attractions, along with an auditorium. A walking path leads to a grand overlook of the New River Gorge and the New River Gorge Bridge. Other visitors centers are located at Sandstone, Grandview, and Thurmond.

An engineering feat, the New River Gorge Bridge is the largest single steel-arch bridge in the Western Hemisphere. Its completion saved motorists well over an hour over narrow two-lane roads down into the New River.

A monumental steel arch built on a grand scale not often seen in bridge construction, the New River Gorge bridge opened in 1977 as the highest and longest arch bridge in the world with a height of 876 feet and a main span of 1,700 feet.

The most unusual design element of the bridge was the decision to use a special type of steel that develops a brown colored rust coating that naturally protects the steel. It saves the West Virginia Department of Transportation a million dollars for every time they would have had to paint the bridge as well as giving the span a natural, rugged look that blends into the tree-filled surroundings.

Before the arch design was chosen, other bridge types considered for the 3,030 foot long gap included a suspension bridge, a jackknife truss-arch, and a continuous truss. Luckily, the best design prevailed and West Virginia became the proud owners of one of the largest and most beautiful bridge structures in the world.

The New River Gorge is special in that it is the only high bridge in the world to be celebrated precisely because of its height. Every year on the 3rd Saturday of October an official “Bridge Day” is held and the span is completely closed to vehicles. Nearly 200,000 people are then allowed to walk on the bridge for a one day festival that is centered around the spectacular view of the New River and BASE jumping.

Bridge Day has been canceled for just the second time in its history. Concerns with the Covid-19 pandemic and ability to safely stage the event led the decision to cancel the planned 2020 installment of West Virginia’s largest one-day festival which would have been held on October 17.

Before the New River Gorge was a natural attraction, it was known more for its coal. In 1863, the first railroad line was installed through the valley, bringing industry and a boom-town mentality to a region that was all but inaccessible. Coal mining camps and support towns, such as Thurmond, prospered for the latter part of the 19th century, but all of the towns are now just mere shadows of their former selves, and most cease to exist today.

New River Gorge National River is accessible by US-19 and Interstates 64 and 77 in south central West Virginia. The Canyon Rim Visitor Center is located just north of Fayetteville via US-19. The Sandstone visitor center is off of SR-20 at I-64, exit 139. The Grandview region is accessible via I-64, exit 129 and SR-9.